Why They Were Called "Safety" Bicycles

The first popular bicycles were so-called "ordinary" bicycles - the rider sat high atop a single large wheel that had pedals attached directly to it with a single wheel that trailed behind. It was not easy to mount, it was not easy (apparently) to stay balanced, and since there were no brakes as such, stopping could be difficult - but if you hit the wrong sort of obstacle, you could come to a sudden and unexpected stop, pitching forward.

Recently I found two different booklets available online, both published in 1881 in Boston, that make the dangers of the ordinary bicycle quite clear. 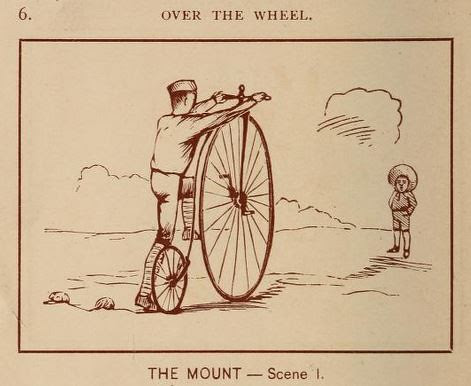 As with all the illustrations in this little instruction manual, at first things seem manageable . . .

These two illustrations are from "Over the Wheel" - well, with a title like that, perhaps the emphasis on mishaps is not surprising. 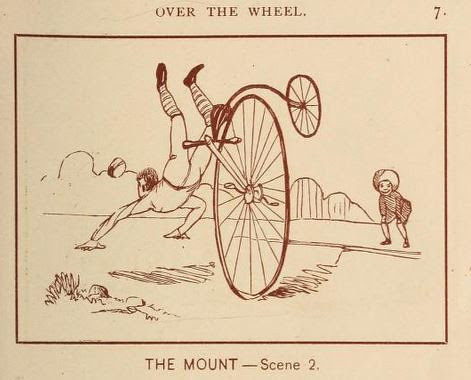 As usual as portrayed in this booklet, the rider ends up in an accident

Another booklet in a similar vein is "The Illustrated Bicycle Primer" that similarly features illustrations with cyclists crashing in various ways.

So, once the bicycle as we know it today apppeared in the late 1880s, with similar sized front and back wheels and a chain drive system, it is hardly surprising it was distinguished from its predecessor, the "ordinary" as being the "safety bicycle." 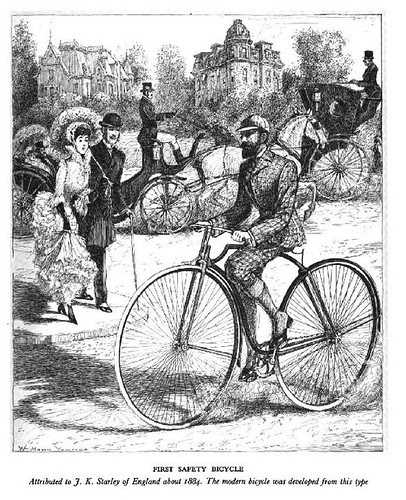 After not a very long time, the "ordinary" bicycles disappeared and the word "safety" to designate a bicycle also went out of use.
Posted by michael neubert at 9:19 PM