"Dangerous States" Where Insurance Companies Hope to Sell You Coverage

Hope to sell you policies and make bigger profits.

Insurance Business America, on online publication, has an article, "The Most Dangerous States for Cyclists" - it's a little strange to read.

Florida is the most hostile state for bicyclists, with 6.56 cyclist fatalities per million people in 2011, according to data from the US Department of Transportation. Louisiana and Oregon follow close behind, with 3.93 and 3.87 deaths per million.

This publication is arguing for special bicycling insurance policies - "For cyclists in these states, certain insurance policies are vital." They even get the League of American Bicyclists to provide an endorsement: ""Claims against any of your existing policies may result in an increase in premiums," said Scott Williams, membership director for the League. "But filing bike-related claims under a bike-specific policy may protect you from rate increases—and provide additional, supplemental coverage." Plus the national authority on bike law, Bob Mionske - "And cyclist insurance isn’t just for people who bicycle professionally, says bicycle attorney Robert Mionske. Producers would do well to recommend cyclist insurance to all clients who regularly ride a bike and don’t have proper coverage elsewhere."

Comprehensive cycling policies are only $250 to $300 a year for most riders, this article says, and concludes that, "there is a "big movement" in the insurance industry for bicycle coverage, which may pay off handsomely for producers in at-risk states." Yay, more profits for insurance companies!!

Probably it is better if people outside of an industry don't read these sorts of things. 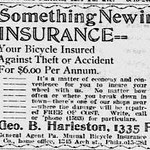 Bicycle insurance was around before there were cars, as a matter of fact

Posted by michael neubert at 11:05 AM