Secretary of State John Kerry had a serious bicycle accident while getting his recreational cycling in while in France, taking time from negotiating with the Iranians. Kerry is 71.

One tends to think of recreational cycling at 71 as an activity taken up only recently by people of that age but there are examples from 100 years ago, even among high level diplomats - Alvey Adee, a career diplomat of the late 1890s up through World War I, made regular cycling tours in Europe before WWI and rode to and from work by bike. 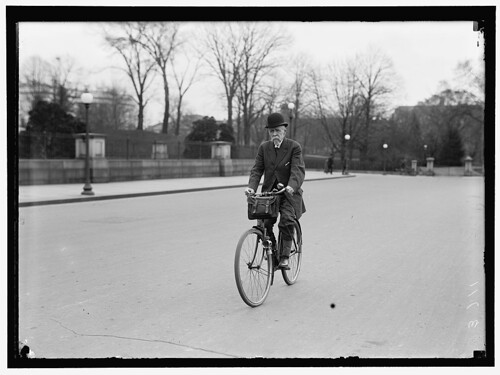 Alvey Adee riding his bike to work at age 72

If Adee looks a little tentative in this photo, perhaps it is because he had an accident of his own wile cycling the previous year:

ADEE, ON BICYCLE, CRASHES INTO AUTO

Assistant Secretary of State A. A. Adee had a narrow escape from serious injury this morning, when he rode his world-famous bicycle, which was carrying him to his office in the State Department, into the automobile being driven by J. E. Baines. of Browning Baines, coffee manufacturers, as Pennsylvania avenue northwest. Mr. Adee'a bicycle was damaged to such an extent that he was unable to ride it. He escaped serious Injury, however, although miraculously. Following the collision, Mr. Baines jumped from the car, assisted Mr. Adee to his feet, brushed the dust from his clothes, and after making an inventory, found that the aged cyclist was practically uninjured. The accident happened at Sixteenth and Corcoran streets. Secretary Adee was going west on Corcoran, and was turning into Sixteenth when he came immediately in front of Mr. Baine's automobile, which was going south. Mr. Baines turned his machine about, but not in time to keep Mr. Adee, who had not till that time seen it, from colliding.

I suppose one difference is that in the press reports of Kerry's accident he has not been referred to as an "aged cyclist" (or for that matter, aged diplomat).

Posted by michael neubert at 2:04 PM No comments:

Barrier Arm Hits Me on the Head

On April 22, I left work and the Capitol Police decided to test my helmet. I wrote the message below to one contact and started to make an official complaint, but the process is more trouble than it is worth, in my view. These barriers built into streets have always made me nervous, and apparently for good reason.

Yesterday I left the Madison garage at about 5:15 pm. I usually turn right, but I was going to the ball park and turned left. I stopped immediately and talked to someone on the sidewalk for a few minutes, then I proceeded in the regular traffic lane down the hill. As I approached the intersection, the gate was up, the plate was down in the ground, the light was green and the pedestrian walk signal showed 20+ seconds. I was traveling between 15 and 20 mph in the center of the right side traffic lane.

As I approached the intersection in full view in the middle of the traffic lane the arm was activated and lowered. The plate thankfully did not come up. I managed to stop just as the arm hit me right on my head (not by intention, that is just how it worked out), but since I was wearing a bike helmet, I was mostly just surprised and not injured. I pulled over about 50 feet from the observation post where I guess the person operating the arm is located (although I don’t know for sure). Two police officers were outside talking and one eventually asked if I was OK.

I did not stop to talk to the police further about this at that time. I felt both foolish and angry and the police didn’t seem interested in any event.

In short, be careful.

Posted by michael neubert at 12:50 PM No comments: