Not an Attraction of Bicycle Commuting

I could see those droplets as I rode along but my attention was mostly focused on staying upright. When I got home I discovered that the droplets were frozen. I don't mind so much riding in the cold or riding in the rain, but riding in freezing rain and/or sleet is not something that is enjoyable in the usual sense, except when it is over, I guess.

I used to wear a baseball cap under my helmet in order to have a brim to keep water off my fact, but the hat wouldn't fit under the helmet well - this little brim works fine. Usually not adorned with ice, however.

Posted by michael neubert at 9:01 AM No comments:

When I lived in Seattle, my understanding was that the Seattle Police were among the first in the late 20th century to resume active use of bicycles as a standard means of transportation for some officers. (I thought I could confirm this easily with Wikipedia, but their article on this topic is awful.) The Seattle police web page on their bicycle use doesn't make this claim, but so maybe they were, maybe they weren't.

This was a resumption of police bicycle use since urban police had certainly used bicycles actively in the late 1800s. I have mentioned this in earlier blog posts - for example, a newspaper story from Washington DC in 1897 describing the DC police "bicycle squad" mobilizing to catch scofflaw bicycle racers.

The Seattle Police tweeted, "Just bring the bike back before #SuperbOwlXLIX @mosesbread72 :-) "
Posted by michael neubert at 9:05 AM No comments:


Photo from several years ago, but bike and tires look same now

I have a 15+ year old heavy ChroMoly Giant mountain bike with studded mountain bike tires - they were sold under the NashBar brand, but were made by Kenda (I think). 1.95 (or really 2) inches wide. There are two rows of studs, kind of alternating in position relative to one another looking across the tire. They are far enough out from the center of the tire that one can significantly influence how many studs may be in contact with the ground by changes in the tire pressure.

Three days ago it was snow, not ice, and I had the tires at 55 pounds per square inch. I made pretty good time but the studs were not really necessary. Two days ago the conditions were much more icy for about half the ride, in other words, the part that is NOT MAINTAINED BY THE NATIONAL PARK SERVICE (unlike Arlington County, which pretreats its bike trails, God help us). I rode to and from work with the tires inflated only to 40 pounds per square inch and clearly that improved the studly-stickiness of the tires - very little sliding around. On the other hand, on bare pavement, the road resistance is pretty noticeable (and unpleasant). A compromise.


Typical Mount Vernon Trail conditions - thanks for nothing, NPS

This morning I increased the pressure to 50 pounds per square inch since I was hopeful that the trails would be more clear today, but there were still significant areas that were covered from one side of the trail to the other. 50 pounds per square inch was too much to have the same kind of good traction that 40 provides, but I chose to ride along the edges of the trails where there was less bare ice or in a few cases off on the frozen ground along the trail. The improvement in rolling resistance by having more air in the tires made up for a small amount of slow riding in the few really bad spots.

I have now had these studded tires for something like eight years - maybe more. Of course there was at least one year where I didn't use them at all, but I don't ride them much. Originally I thought that if I rode what must be cheap metal studs on lots of bare pavement that I would pound them flat (ruin them) in no time, but in fact they seem to show little wear at all.

Last year I realized that I had lost several on each tire - they are kind of like short thick nails, with a head at the opposite end from what sticks out of the tire. Nashbar sells replacement studs with a tool for installing them and that works fine. I am now riding with a full complement of studs.

I see that there are road tires with studs - the rows of studs are of course much closer to each other. I assume that overall in most urban conditions these would be faster but for now I will stick with the mountain bike approach.

Posted by michael neubert at 12:49 PM No comments:

A Bicycle Race as Analogy for Federal Budget-Making (1898)


From the cover of Puck magazine, 1898 (cropped version)

Image of the full cover.

I think it is correct that this is an analogy, but like most semi-educated folk (I have two masters degrees but was never able to open the door behind which I would have found a PhD) I am not always right in the simile-metaphor-analogy parsing process.

The illustration shows the Capitol dome off to the left; perhaps this "National Track" is supposed to be on Hains Point?
Posted by michael neubert at 6:12 PM No comments: 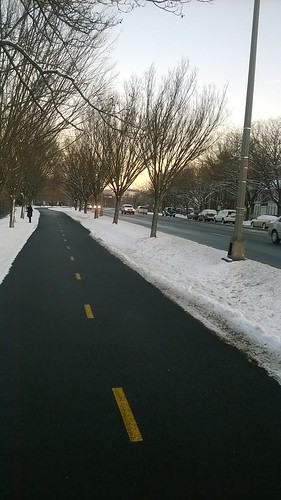 At long last, parity (if only in Arlington)

Clear roads and clear trails, on the same day. Thanks County government!! 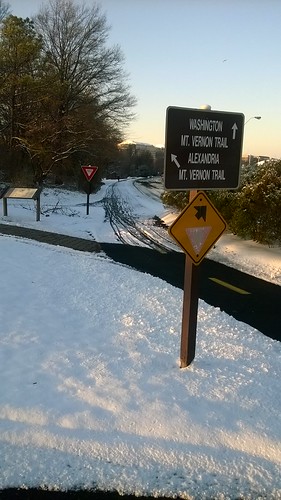 I stopped on my way home to take this photo. This is where Arlington County's trail clearing efforts came to an end - the Mount Vernon Trail maintained by the National Park Service has had nothing done and tomorrow will be an icy mess.

My photo doesn't show it clearly, but it is pretty funny (to me) how Arlington's mini-plow went in a nice little circle clearing the trail before heading back into Arlington.

I suppose the National Park Service will do something when hell freezes over.
Posted by michael neubert at 9:11 PM No comments:

The DC streets I saw, however, were not plowed at all. Crazy.
Posted by michael neubert at 9:42 AM No comments:

Tomorrow we may have and inch or two of snow, starting around 4-5 am. Maybe.

There had been discussion of more allocation of resources to clear snow from "mixed use" (that is, bike) trails, but I had not realized this could include pre-treatment before the snow. On my way home today, turning off the Mount Vernon Trail onto the trail along Four Mile Run, I noticed the tell-tale lines on the pavement indicating some kind of vehicle had come through and applied some kind of treatment in advance of the snow's arrival. 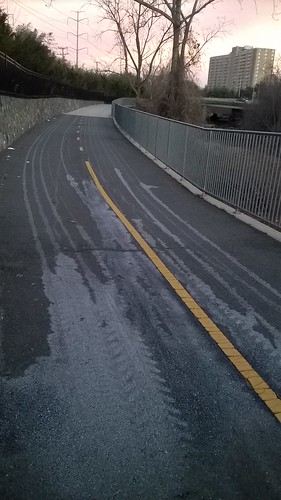 Looking away from Shirlington, you can see the application of some sort of liquid treatement both coming and going

Apparently this is where the vehicle turned around since a fair amount was spilled. 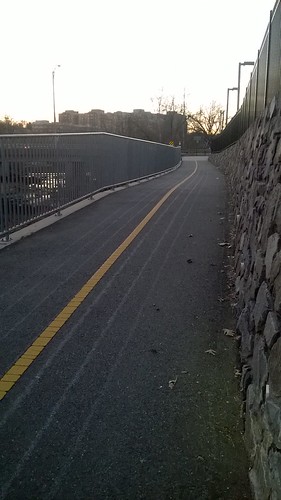 Looking towards Shirlington, you can see that the narrower trail means just one direction of application

I have no idea how helpful this will be. Find out tomorrow, most likely.
Posted by michael neubert at 10:59 PM No comments: