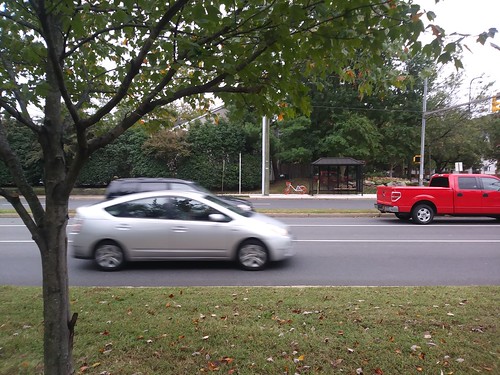 This bike arrived at this location last Sunday morning. (The photo was taken from the local multi-use trail across the street from the bike that is heavily used by walkers and cyclists.) It is at South Wakefield St and South Walter Reed Drive in (South) Arlington, VA, at a bus stop. Biking by most direct route, it is less than ten miles from Capitol Hill, which is the middle (assuming you look at it that way) of Washington DC. Not the distant suburbs, but not a quick bicycle ride either.

For the "docked" Capital Bikeshare system, this area is at the edge of the present network of bikeshare docks. The nearest station is now about one-third of a mile away. There are about (per https://www.capitalbikeshare.com/how-it-works) 3,700 Capital Bikeshare bikes available across the metro DC area with this network.

This orangy bike is part of Mobike's dockless bikeshare. In the DC area, Mobike has started with 400 of their "dockless" bikes. Mobike ("the world's largest smart bike sharing company" they say) has a press release with some details of their plans.


Mobike is a re-imagination and delivery of the ultimate urban bicycle with innovations such as the chainless shaft transmission, non-puncture airless tires, a lightweight aluminum anti-rust frame, an enhanced and durable disk-brakes and an auto-inspired five-spoke wheel. These functional design elements result in a maintenance-free bike, with each Mobike’s lifespan estimated at 4 years of fix-free cycling. Each bicycle is connected to the Mobike IoT network via GPS-embedded smart lock; forming one of the largest IoT networks on the globe.

Some of this isn't accurate for DC - apparently Mobike bikes are usually single speed bikes with a shaft drive (no bicycle chain, but rather a drive shaft like a car). Here, in their first US location, Mobike decided to have a three speed gear system and apparently for the time being they aren't able to combine a low cost durable three speed hub with their shaft drive system, so you get a bike chain (with chain guard to keep chain grease off clothes). Some of it sounds good in one way but is more about reducing the company need for bike maintenance than anything else - as they mention, they hope for "4 years of fix-free cycling." (Four years without lubricating the chain will be . . . interesting.) So the "non-puncture airless tires" (by which them mean flat proof) are mostly about avoiding any company time spent fixing flat tires and not because you are going to prefer the ride of a bicycle with hard tires. (Part of the genius of the basic bicycle design is that the shock absorbing system is built into the inflatable tire, which is mostly not possible with airless tires.) And the "auto-inspired five-spoke wheel" (that has five pairs of spokes, or ten spokes, but OK) is also about low maintenance since unlike regular bike spokes, no maintenance or adjustment of spokes like these is even possible. (The idea that people using bicycles want something inspired by automobile design is curious.)

To get back to the subject at hand. Mobike's PR continues:


Mobike’s distinctive silver and orange bikes will be initially deployed at key downtown locations such as DC Metro stations, university campuses, and public parks. To use the service, users simply need to download the Mobike app, register, and scan the QR code on the bike.

While they may have been "deployed at key downtown locations" this one has been ridden to an obscure South Arlington location where hundreds if not thousands of people have seen it there. Since use of the app is presumably still becoming commonplace, in the course of a full week no one has been interested in using this thing. And Mobike, which is presumably seeing it with their gigantic "Internet of things" network, can't be bothered to move it to some place where it might be useful since that would cost money.

Is there anything seriously wrong with this scenario? Not sure.

Post Script: After a week and a day, the bike disappeared from that location. Perhaps the Mobike people reacted to my tweet (to them) on the subject.

Posted by michael neubert at 10:34 AM No comments: 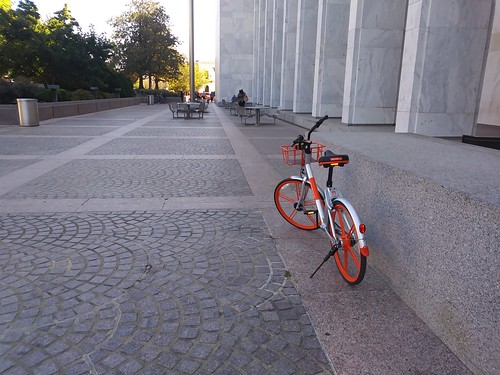 MoBike in front of Library of Congress Madison building

The most recent rider left it near the front door. The nearest bike rack is about 100 feet away, just barely visible in this photograph (if you click on it and zoom in). As it happens, the nearest bike racks were all full, but a plaza like this isn't intended for bike parking on a random basis like this.

Posted by michael neubert at 7:03 PM No comments: