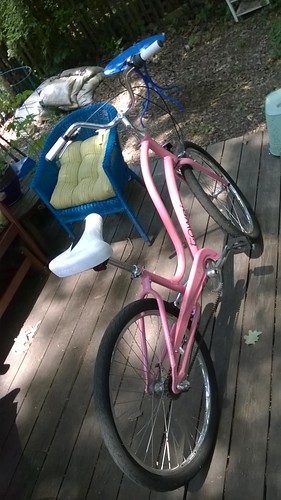 This bike belongs to my wife but I ride it to and from a shopping area that is about a mile away on the weekends sometimes. The three-speed hub shift reminds me of riding a bike-share bike except it has a coaster brake, which takes some getting used to - it also has a rim brake for the front wheel, which does most of the real work of stopping.

The odd geometry that makes it possible to put one's foot on the ground easily while sitting on the seat works for me OK but I sort of feel like I'm hanging on the handlebars somehow.

I guess some components are heavy - given that the frame is aluminum tubing, 31.5 pounds seems a lot. But then the kickstand probably ways several pounds . . .
Posted by michael neubert at 6:05 PM No comments:

This article provides a surprising type and amount of information compared to others I have seen from this period, particularly since it was intended as a tutorial for women readers assumed to know little about bicycles who would use this information to inform purchase of a bicycle. (While I think it is a interesting article, I'm not so sure that much of what is covered would be useful for a successful bicycle purchase, however.) I think it is worth looking at the entire article - here are some highlights:

HOW BICYCLES ARE BUILT. This article is written with a view of enlightening the purchaser of a wheel, who, as a rule, knows nothing about the construction and mechanical advantages of one bicycle over another.

Scientific men who have made bicycle-building their study all agree that the construction of a modern safety is one of the most delicate and intricate problems in mechanics, easily taking rank with locomotive or bridge-building. In most high-grade wheels there are about one hundred separate and distinct parts. Including duplicates, there are some seven hundred and fifty pieces in all. The puzzles and conundrums propounded by the wise men would seem easy of solution in comparison with the task of assembling the parts of a bicycle into one compact, rigid and smoothly-running machine. It is an undertaking requiring the highest degree of mechanical intelligence.

In a gun,"the factor of safety," as it is termed by engineers, is never lower than 12, which means that it is designed to be 12 times stronger than the strain it is calculated to withstand. In general machinery, the "factor of safety" is from 4 to 5; but in a bicycle it is but 1 1/4, in order that the machine may be as light as possible. It can therefore be readily understood that the greatest care must be exercised in its manufacture.

Guns are designed to be safer than bicycles?? Apparently.

More from "How Bicycles Are Built:"


A bicycle frame must be designed to withstand all manner of strains, such as longitudinal, tortional and vibrational, and their many combinations. It must stand up well in collision and the shock consequent to a fall at high speed. And right here let me state that too much rigidity in a frame is almost as faulty as not enough of it.

The bearings of a bicycle are perhaps its most interesting feature. The wear upon these parts is almost constant, and the material used should be of the finest steel tempered in oil all the way through, and not only case-hardened, because casehardening is merely hardening the outside of the metal. When such a temper is used, the hardened surface soon wears through; and the balls, reaching the softer metal of the inside, in a very short time eat away the bearing.

After the frame, the putting together of a bicycle wheel is the most important step in cycle-building. Each spoke is tested to support a hanging weight of not less than 1,000 pounds. The hub-the foundation of the wheel-is turned from a solid bar of steel. A hole for the axle is bored lengthwise through its center, as well as many smaller holes in the flanges around the outside of its ends, to hold the spokes.

In the wooden rim there is, of course, a hole for each spoke. These holes are "countersunk," and "washers" are introduced to prevent the spokes from pulling through the rims; for it is an interesting fact that, while the weight in a wooden wheel stands on the spokes, in a bicycle wheel it hangs on the spokes, the spokes above the hub supporting most of the weight. Were it otherwise, the wheel would quickly collapse; for while the tiny wires are capable of bearing an enormous lengthwise strain, they would immediately bend under a trifling compressional one.

Wheels with rims made from wood were still common at this point.


There is no device known to mechanics which minimizes friction to so great an extent as the ball-bearing. Running parts equipped with it may truly be said to possess the poetry of motion; yet how few among the thousands of wheelmen understand its magical workings!

The complete articlehas additional details about bicycle manufacturing practices of the 1890s.
Posted by michael neubert at 11:01 AM No comments:

A Norwegian Approach to Routinizing Climbing of Steep Hills

Pretty flat around Washington DC, but I can easily imagine having something like this in various places I have been.

It does not seem, however, to have caught on even in Norway where they developed it, so probably not very likely to been seen in this country any time soon.

Posted by michael neubert at 9:34 AM No comments: