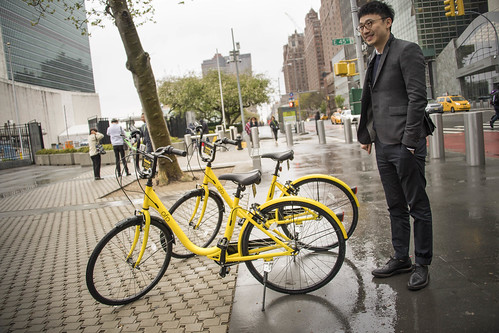 ofo bikes in New York City, not for use but for a press event (it seems)

An article in the Economist ("The Return of Pedal Power...") last week described a new (to me at least, but not entirely new it seems) bike share system that frees users from having to get or leave the bikes from fixed locking stations, rather a rider gets to a destination and locks the bike wherever, then other users can find it there and access it for their use with a smartphone app.

The ofo system is in use in China and Singapore and also San Francisco - in SF it is known as BlueGoGo. Not surprisingly there is a web site.

The Bluegogo Medium channel has a step-by-step description of the process for San Francisco usage. However the SF model, apparently reflecting a lack of enthusiasm for the "leave your bike any old place" model in a US city, does have docking stations - "When you finish the ride, easily return your bluegogo bike to any of the stations (list of bluegogo stations can be found within the app or here) and lock it." Except the link to a map for the stations is 404. Not very encouraging.


U.S. video of how to use BlueGoGo bikeshare bikes, which does not mention use of locking stations

After I published this blog post, then I found this blog post that explains more about BlueGoGo and its dockless competitor that is a company called Spin which is looking at setting up in Seattle, where the most recent publicly operated bike share failed.

Posted by michael neubert at 9:51 AM No comments: 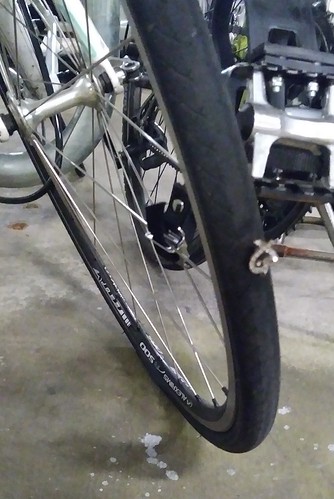 Another bike commuter showed up while I was parking my bike at work with this earring in her front tire - not her earring, of course. Anyway, it managed to stay in the tire while she rode briefly, letting all the air out just as she came up to the rack.

I hadn't seen that one before - flat tire by jewelry.

Not a great photo - I didn't realize the phone camera was not focusing on the right spot.
Posted by michael neubert at 11:06 AM No comments: 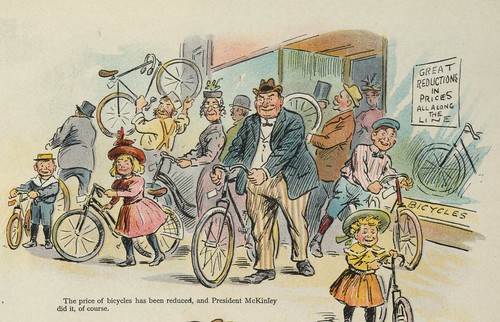 Title-He did it all / F. Opper. From Puck Magazine

Summary-Print shows a vignette cartoon with President McKinley standing at center holding a hat labeled "Inexhaustible Prosperity Hat" and a magic wand, behind him are "Joshua" and "Moses" who has beams of light emanating from his forehead; surrounding McKinley are vignettes showing the wonderful tricks he has managed to conjur since taking office, these include friendly relations between the "Prince of Wales" and "rich Americans", the "Klondike boom" gold rush in the Klondike River Valley, Yukon, an "alliance between France and Russia", the decrease in the cost of bicycles bringing them into the price range of mostly everyone, and a good year for farm produce and high wheat prices which are a boom to the farmer. 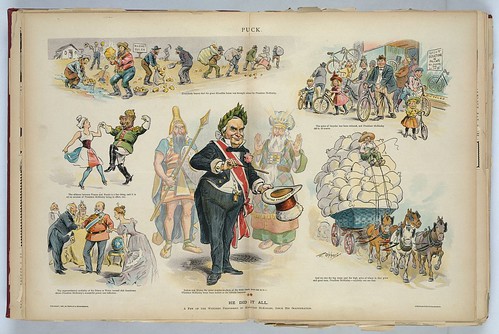 Apparently President McKinley earned credit for some things that Puck Magazine considered unreasonable, including the decline in the prices charged for bicycles. "The price of bicycles has been reduced, and President McKinley did it, of course."
Posted by michael neubert at 7:23 PM No comments: 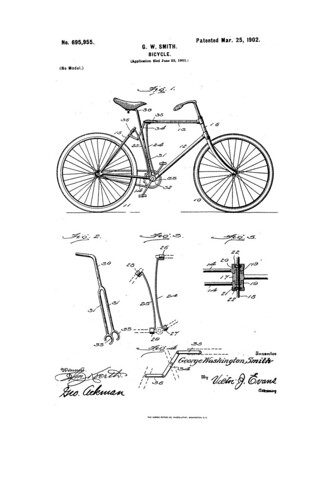 Patent for "...a bicycle-frame so constructed that it is adapted to yield automatically...thereby doing away with the necessity of using pneumatic and puncturable tires..."

The main drawback of bicycles in the U.S. at this time, aside from the continuing rise of popularity of automobiles, was that the tires most commonly supplied on bikes and their associated rims were not easily repaired by owners compared to modern tires with inner tubes. (The rims were relevant since switching to better, more easily repaired tires, required different rims.) As the patent application notes, flat tires were "the cause of great inconvenience to riders." This inventor (George Washington Smith - great name) decided that the main benefits of pneumatic tires was the shock absorbing aspect that could then be replaced by the insertion of what are somewhat like leaf springs in the middle of the bicycle frame. Clever, but perhaps too clever?

One wonders if he really equipped a prototype with solid rubber or otherwise solid replacement tires and tested this out. The pneumatic bicycle tire I suspect is one of those things that is hard to appreciate until you try some alternative. In particular, the amount of shock-absorbing done by a pneumatic tire is easily adjusted by how much pressure the tire is inflated to. A pneumatic tire can easily take most road buzz out of the ride that I think this system would transmit.

Of course the simplest judgment of this idea is rendered by history - while there are certainly some (in fact, many) bikes that have suspensions today, they all have pneumatic tires. 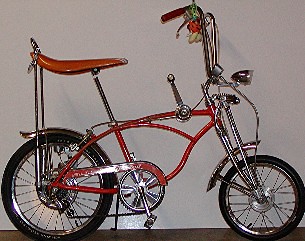 Posted by michael neubert at 9:49 AM No comments: 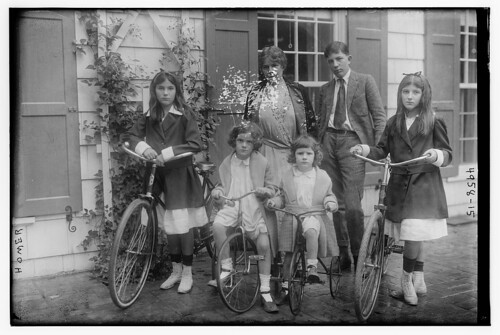 The smaller children have tricycles that are sized for their age, but the older daughters have what are I think adult bicycles. Fairly clearly they are not the same model of bike, or even from the some company, since the head badges are different.

The Homers were a fairly well-to-off family financially, it seems. Louise Homer was a opera singer and recording star and her husband was a composer. These photos and others were from the Bain News Service collection at the Library of Congress and perhaps were for some article about Homer's home life and family, thus bringing the bicycle and tricycles into a photo. 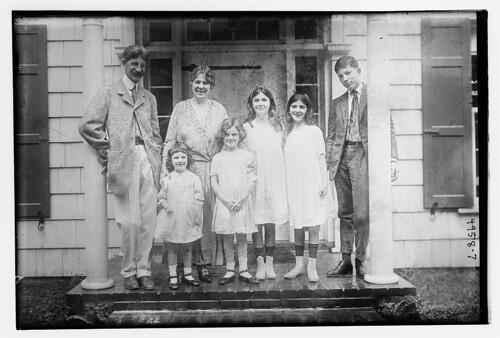 Here by contrast they are smiling
Posted by michael neubert at 12:49 PM No comments:

A True Daredevil Use of a Bicycle 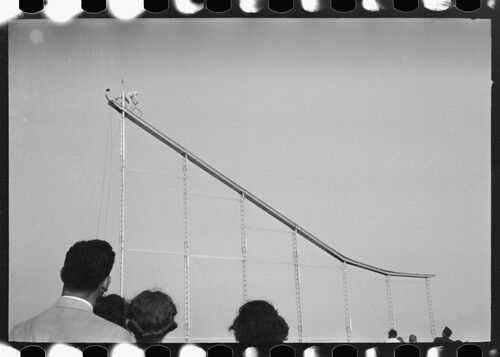 There is no photo in the collection of the pool or other container of water that was his target, or what the "dive" and resulting "landing" looked like. This looks like a crazy stunt, as far as an assured good outcome for the rider. Or the bike, for that matter.
Posted by michael neubert at 10:38 AM 1 comment: