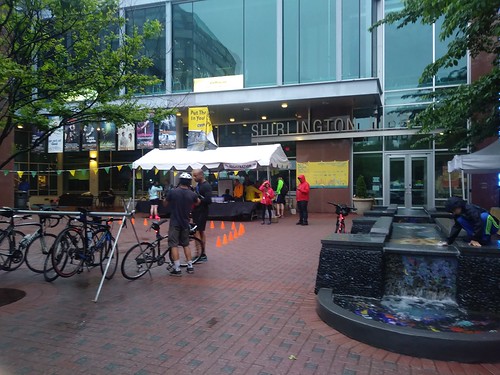 6:30 in the morning at the Shirlington "pit stop" for Bike to Work Day in Arlington, VA

I was surprised to read in the Wikipedia entry on Bike to Work Day that it was created by the League of American Bicyclists in 1956. I would have guessed much more recently. 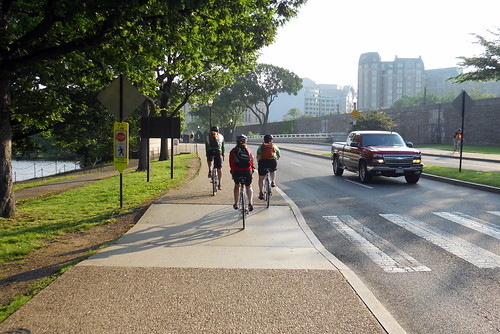 I have a somewhat ambiguous relationship with BTWD - I commute almost religiously; that is, I hardly get to and from work any other way than by bicycle. In theory I want more people to ride because it is the logical thing to want, but I have found in fact that so far for my commute, increasing use of the Mount Vernon Trail in particular has not led to significant improvements in the trail's usability. Most of the asphalt is the same as it was 20+ years ago - and this isn't because it is aging well or that there is enough of it (in terms of the width of the trail in particular).

Also, my sense is that the DC area BTWD has had amazingly bad luck in terms of weather - that is, more often than not, it rains. And in fact it rained yesterday for BTWD 2018 and it was fairly steady and heavy enough to keep many from riding. I had signed up and stopped at the local "pit stop" in Shirlington to get a free BTWD 2018 t-shirt (as I did last year, when the weather was better) as a way of showing interest and support (I suppose). It is inspiring (or something along those lines) to see the volunteers there, even at 6:30 am when it started. I was amused to see a small "convoy" of riders there right as they opened. A few seemed underdressed to me, given that it was wet and not really May warmth. (This turned out to be a ride where at the start the rain was light, but over the 10 or so miles it got more and more heavy, to the point that upon arrival at work I was pretty well soaked. Fortunately I have my own office and it is fine to have a clothes line, more or less. Well - fine with me, anyway.) 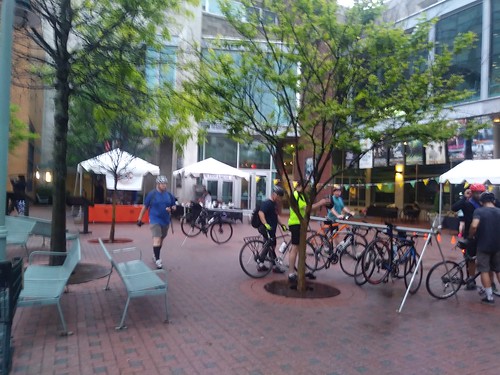 I was glad to get my yellow BTWD 2018 t-shirt. During the past year I have been amused how many times I have seen people wearing the lavender colored BTWD 2017 t-shirt - amused that I recognized it, as much as anything. I suppose eventually they will give away the 2018 t-shirts somehow but I assume most were not picked up by riders on the way to work, because I think many people took a pass on riding yesterday. Still, a good souvenir of what was not a bad ride - it was just another ride. The rides - they're all good.
Posted by michael neubert at 8:52 AM No comments:

Mikael Colville-Andersen has a strong set of views about urban cycling - I'm not sure I agree with all of them but it seems good to have a person able to voice a positive approach for urban cycling infrastructure and changes in attitudes so clearly.

http://www.copenhagenize.com/ the web site for Colville-Andersen's cycling infrastructure consulting company (in English) gives some flavor for what the book is like. Colville-Andersen is Danish but grew up in Canada, so he writes in English (as well as Danish . . .). 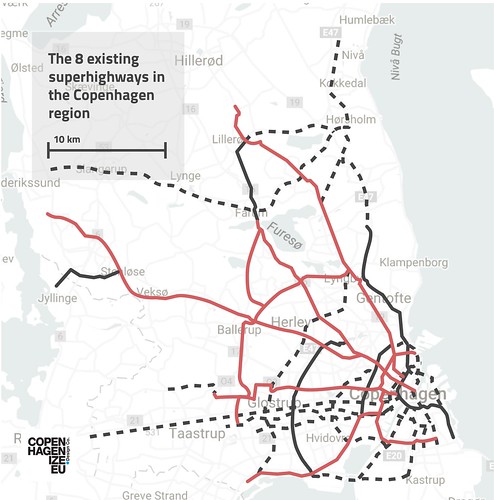 Here is the table of contents - the book is in three sections.

Introduction
1. The Life-Sized City
2. Bicycle Urbanism by Design
3. The Bicycle's Role in Urban Life
4. The Redemocratization of Cycling
5. Taming the Bull in Society's China Shop 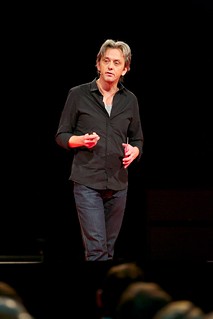 Most of the positive examples are taken from Europe, with some mention of Japan. From north America, Montreal and Washington DC are mentioned the most - I don't think either Seattle or Portland OR are mentioned. (The book does not have an index.)

As an American who favors development of better infrastructure for cycling along the lines of what is described here, the distance we have to go to get there is distressing. Also, according to Colville-Andersen, as a bicycle nut I am not the ideal advocate - that advocacy for cycling does better when it comes from "regular" people. Hmm.

Much of the current DC area bike cycling measures do not meet Colville-Andersen's approval - in fact, the center-0f-the-road bidirectional cycle track on Pennsylvania Avenue is specifically taken as an example of what not to do - of what is done by people who think they know what to do but who have really really bad ideas. DC provides several other such examples, alas - I agree with his analysis completely.

It was fairly late in the book, but there is some discussion of "vehicular bicycling" which was a theory from the 1960s onward that advocated strongly for cyclists to use the same infrastructure as motorists - which he dismisses easily enough. He also has a brief discussion of e-bikes - he is generally not thrilled with their typical use at relatively high speeds, creating a new hazard for other cyclists and even more so for themselves.

There is a brief discussion of bikeshare as a good "last mile" measure but dockless bikeshare is so new (outside of China) that it isn't mentioned - suggesting to me at least that even though bicycles have been around for more than a hundred years, we are having a period of change or evolution. Interesting.

The books is readable. The author as noted has strong views, but doesn't (in my view) hit the reader too hard over the head with them.

An odd complaint - the typeface used in the text for the book has very fine lines and I discovered my lighting setup for reading in bed wasn't enough to let me read this book comfortably, which was a surprise. I felt it was a kind of ironic statement that a book that advocates simple intuitive designs in one area (urban cycling infrastructure design) failed the test of simple access this way, making the book more difficult to read because of some font-fashion decision. (I read a lot - this is an unusual problem for me to have.)

There is a lot here to try to get one's head around - I should likely read this again in a few months. 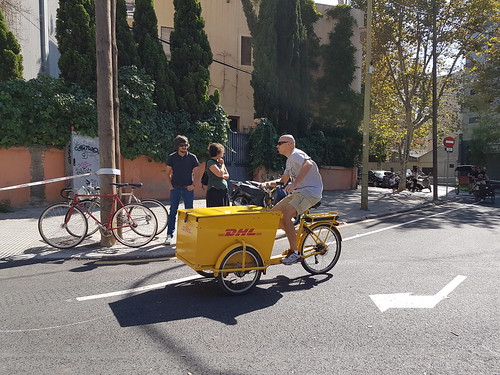 Posted by michael neubert at 9:31 AM No comments:

The summer of 1896 was the height of the "bicycle craze" of the 1890s - a price range of $60 to $75 at that time was fairly good (that is, inexpensive) compared to Columbia bicycles that were offering their most expansive models for $100.

"For Health & Recreation" is an amusing slogan to feature on this poster, given that the couple seems mostly to be enjoying one another's company. Also, the width of the byway upon which they are traveling seems fanciful - not realistic one suspects for the time (or any time, in fact). Still, cyclists were (ahead of motorists, who didn't yet exist!) leaders in the "good roads" movement. Well - some cyclists along with some bicycle manufacturing companies. There had to be some good roads in order for the product to be useful. 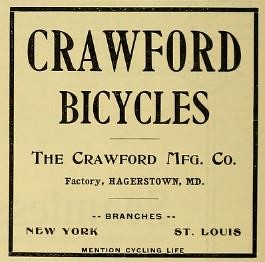 A modest ad for Crawford Bicycles - see how it appeared here: archive.org/stream/cyclinglife00test#page/n759/mode/1up in "Cycling Life," a trade journal. This small ad ran frequently in 1896-1897.

Crawford Bicycles had its factory in nearby Hagerstown MD. (Nearby from the perspective of the Washington DC area.) In 1902 the Crawford brothers sold their bicycle business to a larger bicycle company and proceeded to start up an automobicle manufacturing company, Crawford Automobile.


Posted by michael neubert at 7:53 PM No comments: