When Is an eBike No Longer a Bike?

This Gazelle (from the Netherlands) appeared on the bike rack in the garage where I work. 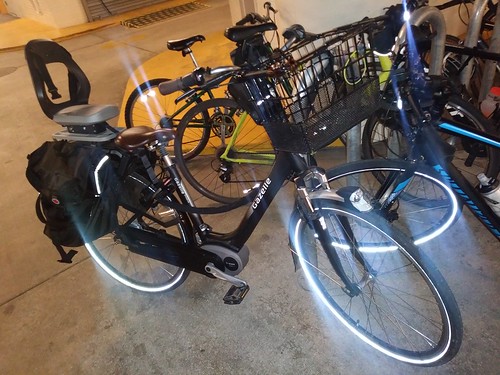 I am amused (or something) by the seat on the bike rack, which I guess is intended for a child too large for a conventional kid's bike seat. It would put a fair amount of weight relatively high up.

The entire bike is quite heavy. Out of curiosity I tried lifting it by the back rack and I would guess the whole thing is at least 60 pounds. So a certain amount of what the electric motor is doing is assuring all the bike's own weight gets down the road, before it starts in with the rider. Or riders, in this case.

Given the weight, I would expect hydraulic disk brakes, but it has conventional rim brakes. Perhaps you aren't expected to go that fast, but with this much weight and rim brakes, you would have less stopping power than you might want and go through brake pads at a pretty good clip. You would probably go through (expensive) wheel rims much more often than most people expect (which I think is typically never - people don't expect to wear through wheel rims with rim braking).

The Gazelle USA site suggests this kind of eBike costs somewhere upward of $2,500 - many of their models are around $3,500.

I guess because of the cost (value?), the owner of this thing has a chain that he uses to lock it to the rack. Most people do lock their bikes to the rack in this garage, but I don't see the point - there is no public access to this garage. I prefer to keep the time I don't spend messing around with bike locks. And certainly I don't carry a massive chain with me! Or any chain, actually. I use the strap on helmet through part of the frame to assure the bike doesn't fall down during the day - this is the worst sort of bike rack for that.

One realizes how things change looking at this - the Dutch Gazelle bike aesthetic (or something like that) for me was always a simple, mostly steel bike - utilitarian and simple. Ageless. This thing has heaps of plastic (that will most certainly age poorly) and I don't think "simple" is a word that comes to mind, although I guess it is utilitarian. 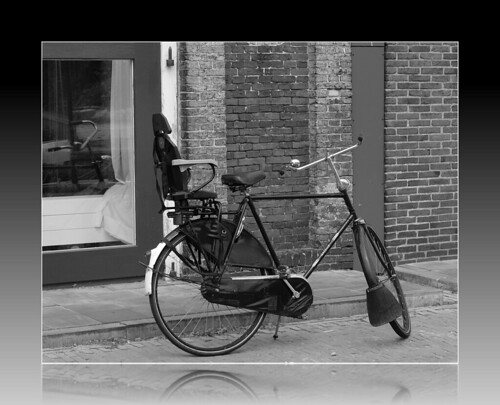 "A Timeless Classic" from user MacFred64 on Flickr (CC license)

This probably pigeonholes me as an aging cyclist frump of some kind. Oh well.
Posted by michael neubert at 10:00 AM 2 comments: