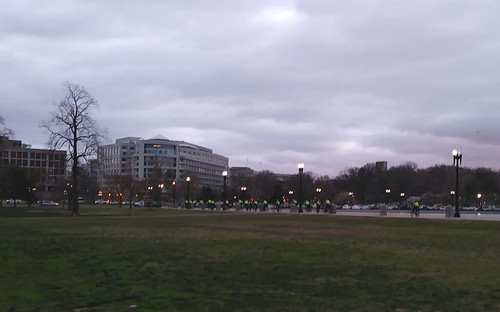 In front of Capitol reflecting pool

Yes, yes, they are some distance away, but about two dozen police officer with yellow reflective vests are practicing bicycle riding this morning. Who would have guessed they need practice.
Posted by michael neubert at 8:11 AM No comments:

The Cyclist Who Went Out in the Cold (Book Review)

The Cyclist Who Went Out in the Cold: Adventures Riding the Iron Curtain by Tim Moore


https://youtu.be/A5YVpF6PPm8 - is a video on YouTube by the author to the Russian (formerly the Soviet) national anthem with different footage of his trip, mostly taken by himself with his phone (which is remarkable in itself).


Author's video in support of the book on YouTube

Early in 2015 (I think that's right; books like this are often a bit vague on when they took place) travel writer/adventure cyclist Tim Moore set of to trace the route of the (former) Iron Curtain, the defacto border between socialist Eastern Europe (the "Soviet bloc") and Western Europe, much of which can be followed by riding the EuroVelo route 13 (EV13).

For reasons never quite properly explained, the author chose to start his trip in Finland in March, more or less guaranteeing that the part of the book describing his travails in Finland is about surviving when cycling in what most people would consider winter, with temperatures down to 20 below (Celsius - oddly this book was not edited for the US market, so temperatures are in Celsius and distances in kilometers - oh well). And to make things more challenging, Moore didn't select any sort of normal touring bike but an East German "shopping bicycle" with 20 inch (that is, small, like a folding bicycle) wheels - a pretty crappy, poorly made, heavy one at that. (This follows on his previous cycling bike where he attempted to follow the route of the 1914 Giro race in Italy in 2012 riding a bicycle that dated to that period, including wooden wheels.) With only two gears! And a coaster brake! OK and a crummy front brake. Which sets the stage for is self-deprecating tales of travel.


The author follows a tried and true approach to such travel narratives, mixing description of his adventures (or here, more often, misadventures) with digression on relevant history.

Probably the strangest aspect of this book is that the part set in Finland is dis-proportionally long compared to the rest of the trip, but then perhaps it is because it really took that much longer so it is proportional in terms of days of travel. He also provides more digressions into Finnish history and society than he does as he gets further south. (I'm not so fond of the history so this was fine with me.)

It's a long trip (three months, thousands of miles or kilometers) and over 330 pages, its a long book. I got through it, I enjoyed reading it.

Some of Mr. Moore's description of different nationalities (Finns, Russians, on to Austrians and Bulgarians eventually) would no doubt offend many people of these nationalities. Russians in particular. Hmm.

After Austria, it was a little more difficult to keep track of things - the EV13 goes in and out of countries and so border crossings become the main feature, along with some hill climbing escapades (followed by hair-raising descents) that are somehow less thrilling to read about than the descriptions of near-death-from-freezing-experiences towards the beginning.

Somehow Moore managed to travel this distance, including the slow snowy/icy parts near the beginning, in only three months. Amazing. And then with his book to relay it to us in the British version of ah-shucks humorous misadventures, including insights into a third of the nationalities of the former Eastern Europe and some thoughts about cycling thrown in.


View all my book reviews.

Posted by michael neubert at 9:54 PM No comments: 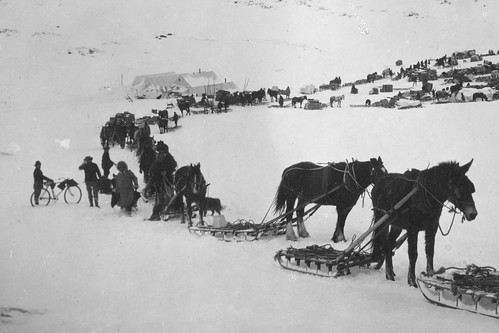 Bicycle as part of Alaska Gold Rush. One wonders what it was for. 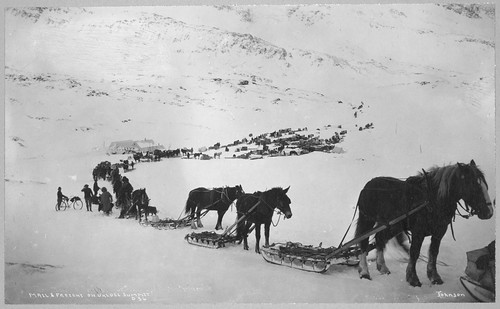 Mail and freight on Valdez Summit

Email ThisBlogThis!Share to TwitterShare to FacebookShare to Pinterest
Labels: snow

Smartphone Add-Ons - How Smart is That?

"Hexagon is a bike camera that turns your smartphone into a rearview mirror" - article about a new Indiegogo funding effort for the solution to end all solutions for bike safety and anti-safety, all wrapped up in one.

Perhaps it goes without saying, but I am not the demographic this sort of thing is supposed to appeal to - but it's still a free country so I am still allowed to express some opinions, right?

It isn't impossible that someone will come up with a good rationale for attaching a smartphone to your handlebars, but so far I have yet to see one, particularly for recreational riders. For one thing, most of the brackets that hold smartphones in place aren't going to keep the smartphone attached if you have a simple falling accident, so in many cases, the phone ends up on the pavement, smashed. But that is secondary to the contradictions of this particular device.

There are a slew of safety features described - you have a turn signal system, a tail light, a brake light, you have a rear view mirror when the camera's view is displayed on the smartphone, it can provide video evidence if something bad happens, and it even provides parents real time information about a child's ride (with its "new generation parental control system" - by which they mean parents who are out of control, I think). It can automatically notify your emergency contacts if you get in an accident! But then there is important anti-safety feature, that this device encourages live streaming of insane stupid bike tricks. ("Amaze your friends with new tricks through live stream functions.")

"Your rides with Hexagon will be more safe, connected, and fun" - apparently I am a curmudgeon.

Posted by michael neubert at 1:49 PM No comments:

Epic Bike Rides of the World by Lonely Planet


Lonely Planet seems to have decided to publish more specialized guides - although this isn't a take-it-with-you sort of guide but more of a this-may-inspire-you introduction to possibilities for longer distant cycling (generally at some non-trivial expense, by the way).

The format is puzzling. It isn't a coffee table book, but is large-ish format. Physically it reminds me of a high school text book.

The book covers in some detail fifty different possible cycling routes (as they call them) in thirty different countries, organized by region (Africa, Americas, Asia, Europe, Oceania). The number of routes per region varies widely, with all of two for Africa but nineteen for Europe and fourteen for the Americas. The rides are categorized "easy, harder, epic." For each route, there is a "tools" section that gives some information for someone who might actually be considering one of these rides, but since these are mostly not in one's neighborhood and would require considerable preparation, they are just a bare bones start at the research that would be required.

The photography is nice - again, with the idea to perhaps inspire you.

In a nod at how such information would be presented on a web side, each of the fifty routes ends with brief "more like this" section with another three routes covered in a paragraph. Some of these rides were more interesting to me than the ones covered in details - oh well.

The front cover has the blurb, "Explore the planet's most thrilling cycling routes" at the bottom of it. Perhaps I don't think of "thrilling" the right way. Clearly a few of them are in what I would consider attractive for a thrill seeker, but I would say a more accurate blurb would be "the planet's most satisfying cycling routes." But I guess inspiration needs to be for thrills, not satisfaction.

Posted by michael neubert at 8:15 AM No comments:


The sub-title of this book is, "The Story of the TransAmerica Bicycle Trail." This is a coffeetable format book published by the Adventure Cycling Association, which I learned from reading this book, came into being as the organization headquartered in Missoula, Montana, that led to the 1976 "Bikecentennial," an organized effort to celebrate the bicentennial with an established route and some support for participants to ride across the country - about 4,100 cyclists did so. Wikipedia has a good short entry about Bikecentennial.

The book mixes history of the Bikecentennial and descriptions and photographs of that event in 1976 with description of the TransAmerica Bike Trail that resulted with coverage from the 1970s through to today, as well as profiles of different riders. It's quite well done. Although it is the kind of thing you don't usually sit down and read cover to cover, I have ended up reading a lot of it. The photography is good with the authors having successfully dug up quite a few photos from the 1970s.

Oddly the Adventure Cycling Association doesn't do anything to make this book available to vendors that provide books to public libraries, so I don't think you will find this in any public library. In fact, it doesn't seem to be available from Amazon, even. To get a copy you have to go to the Adventure Cycling Association web site. (I sent the ACA people an email pointing out it would be a good idea to provide a book like this to vendors that sell to libraries - they could probably sell several more copies of the book and get the word out about their association too.)

Posted by michael neubert at 5:58 PM No comments: