In Paris for a week, I commuted about 3-4 kilometers back and forth to the National Library every day from the hotel to attend a conference. I would wear the clothes I would be in all day and didn't take a helmet to Paris, so no helmet. I mostly rode at a much more leisurely pace than I do at home but then the bikeshare bikes don't support much in the way of speed (or braking either, so perhaps that's good).

In my Arlington-Washington commute, I spend most of the time on trails and wear bicycling garb (ie, lyrca etc.) and try to maintain a high rate of speed - I work up a sweat. I shower and change at work. But then the distance is more like 17 kilometers one way. And I wear a helmet.


Parke Davis employees of 1899 leaving work, many on bicycles

Before cars become popular and extremely inexpensive, bicycles were briefly used by some for commuting much like Parisians do now, or so evidence like this short film clip seem to suggest.

I have given some thought about the similarity and differences between the commuting I did in Paris, which is less of a production (in the sense of not wearing special clothes, helmets, etc.) and what I do at home. I have concluded that the similarities (it is still biking) are more important than the differences. I regard Capital Bikeshare riders here as fellow travelers, so to speak, in a real sense.

One thing I really enjoy about bikeshare biking, which I have done in Paris several times and in Boston, is that I immediately lose any concern with my rate of travel - unlike when I am on a road bike and I sometimes have to fight a desire to go fast (or as fast as I can, anyway). A typical bikeshare bike immediately says to me as I sit on it something about the improbability of going fast (I guess) so I don't think of the experience in terms of speed, but simply of pleasing forward motion. Since my misguided competitive urge that appears while sitting on a road bike disappears, the experience seems better than riding a road bike! (But I may be reading too much into this since I have done most of my bikeshare biking in Paris, and being in Paris may have something to do with this.)

Posted by michael neubert at 9:58 AM No comments:

Velib' - the Best Part of Paris? 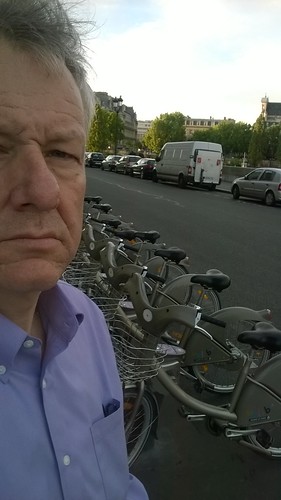 Getting a bike near the hotel 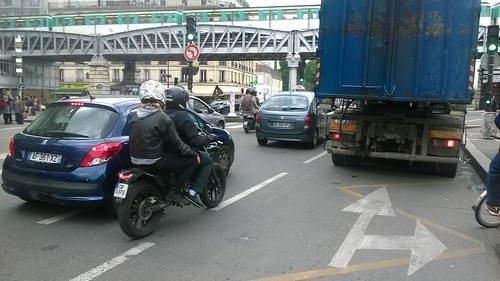 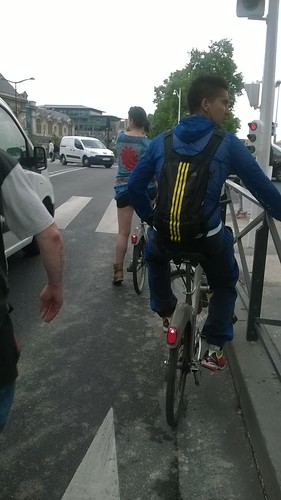 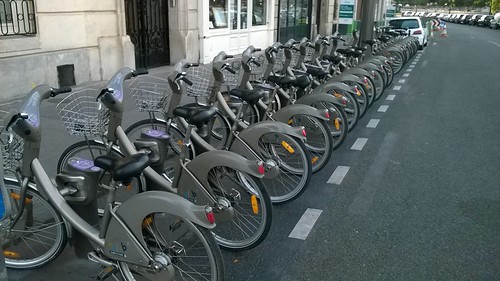 All the slots are full!

Posted by michael neubert at 4:31 PM No comments:


Me some years back with a Velibe bicycle in Paris

I have already purchased my seven day subscription for Velibe when I will be in Paris. The cost is only 8 Euros for a week. By comparison, CitiBike in NYC is 9.95 (plus tax!) for one day and $25 (again, plus tax!) for a seven day "access pass." Capital Bikeshare here in the DC area is at once more and less - $7 for 24 hours but there is no seven day option, rather one can pay $15 for three days - uck. (Taxes are apparently included for Capital Bikeshare.)

The American view of pricing bikeshare is that the operational costs are supposed to more or less be covered by the user fees - but typically the short term rental folks are subsidizing those with annual subscriptions so it is all relative. In Paris they must be taking the view that bikeshare is more like public transit, where typically "the farebox" (revenue direct from users) is only a portion of the support. This so-called farebox recovery rate can be all over the place - in Austin Texas, it seems to be less than ten percent! - while in Chicago it is more than 50 percent. But for now Americans want bikeshare to pay for itself - 100 percent.

Hmm. Ironically my use of Velibe in Paris will be covered by the American taxpayer who will be funding this incidental expense of my trip, so the French taxpayer is, in this very very minor way, subsiding the US of A.
Posted by michael neubert at 9:41 AM No comments:

Today I read in the NYTimes that the Marxist Internet Archive site (Marxists.org) was forced to pull down their texts from the English version of the complete works of Karl Marx because they are under copyright and defended vigorously from infringement. Hmm. Hard to imagine.

Thinking about Marxism and so on, I was reminded that Vladimir Lenin was a sometimes-cyclist, at least before he returned to Russia to lead a revolution.

In 1910, leaving in exile in France, Vladimir Il'ich had an accident while riding his bike and followed up with a lawsuit against the offending motorist.


I have received your postcard—merci for the news. As far as the bicycle is concerned I thought I should soon receive the money, but matters have dragged on. I have a suit pending and hope to win it. I was riding from Juvisy[?not sure] when a motorcar ran into me and smashed my bicycle (I managed to jump off). People helped me take the number and acted as witnesses. I have found out who the owner of the car is (a viscount, the devil take him!) and now I have taken him to court (through a lawyer). I should not be riding now, anyway, it is too cold (although it’s a good winter, wonderful for walks). Letter to his sister Masha written early in 1910

Pretty good accident avoidance technique jumping off the bike during a crash for the father of the October Revolution. . .

Apparently justice in France at the time was swift, even for the to-be leader of the Russian proletariat - by the end of the month, he writes, "My bicycle case ended in my favour." (Letter to his sister also in January 1910.

It seems Lenin was not crazy about Paris and cycling, writing to his brother that, "I have often thought of the danger of accidents when I have been riding my bicycle through the centre of Paris, where the traffic is simply hellish."

Almost 100 year later in Vladivostok, I encountered this entrepreneurial young post-Soviet Russian who was earning a living selling chances to ride a trick bicycle three or five meters successfully - the steering was rigged up so that left is right and vice-versa. This, it turns out, isn't easy (at all) to do.

Yes. Or rather no, I don't know what the significance of this is.
Posted by michael neubert at 6:42 PM No comments: