Washington, D.C. clip of Pennsylvania Avenue in 1907 from GhostOfDC

In two different earlier blog posts, first this one and then this one I looked at bicycles that appeared in two short videos of DC streets in the summer of 1903. I have now found the above video of Pennsylvania Avenue in DC, with the U.S. Capitol in the background, from 1907. One can see a lot of change in the four years!! 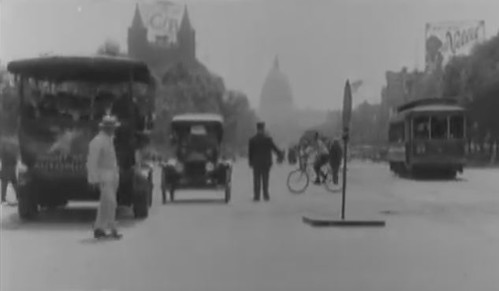 At about 25 seconds in, a cyclist first appears riding from right to left

The main impression of change is WOW there are a lot more cars carrying passengers on a main thoroughfare in Washington DC in 1907 than there were in 1903, and far fewer horse-drawn carriages. The fellow with a hat facing the Capitol is apparently a traffic policeman who casually directs traffic and to some limited extent, pedestrians. 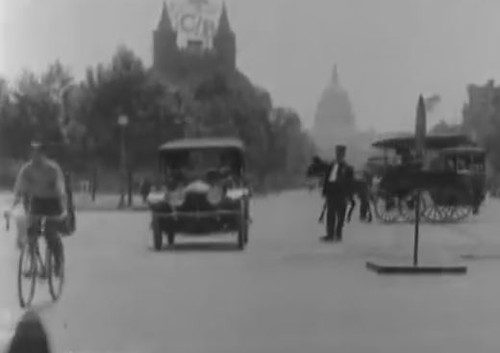 This is the same cyclists as above, having made a left turn in the intersection and now proceeding away from the Capitol

The cyclist proceeds as any other vehicle, motorized or horse-drawn, riding in the main part of the street. 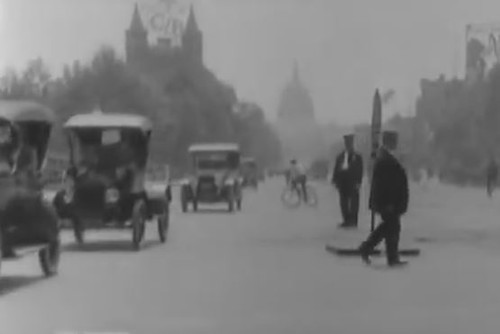 There are some small breaks in the film - it isn't clear how this cyclist got to the middle of this intersection, but probably he was riding away from the camera and towards the Capitol, then stops or slows to turn to the left. 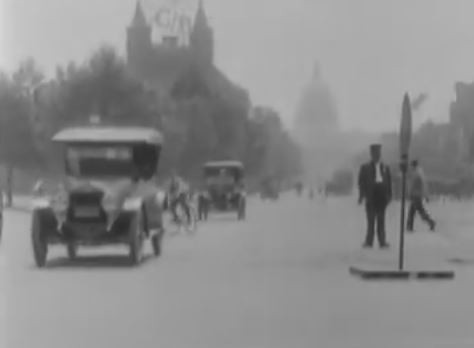 Because of heavy traffic, the cyclist starts to ride away from the Capitol but then turns to his right

The cyclist makes his left turn in two stages - first, he makes a U-turn, then once he is established heading in the reverse direction and traffic clears to his right, he makes a right turn to complete his original left turn. The traffic policeman plays no role in this maneuver. Note that cyclists in this intersection would have had to navigate safely tram rail tracks in two directions, crossing those at as close to a 90 degree angle as possible. 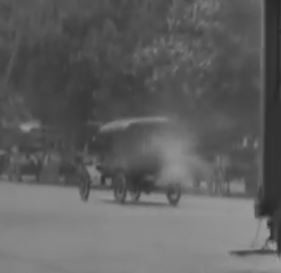 One of several vehicles spewing vast amounts of exhaust, which can't have been too pleasant 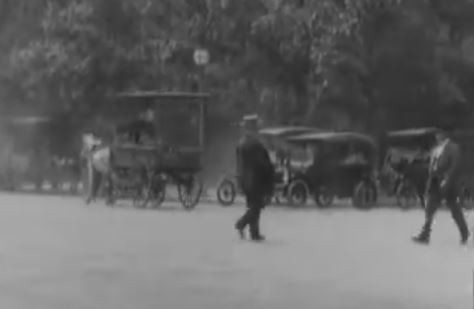 One of only five horse-drawn carriages in the short video

Cars carrying passengers have skyrocketed and horse-drawn carriages, all appearing commercial in nature, have dropped off in number from 1903 to 1907. There are still many streetcars in this urban setting. And there are still bicycles, but the ease with which they can be navigated is much changed for the worse, which probably meant fewer were riding as shown here (although these short videos are of course a very small sample).

Posted by michael neubert at 9:44 AM No comments:

In an earlier blog post I looked at a short film available as a video via the Internet meant to show US Post Office operations from 1903 in Washington, DC. I found another.

The default viewing version is poorly rendered here but the downloadable mp4 file is acceptable.

In this film, meant to show Post Office operations, you can see a certain amount street traffic as well. (The video is apparently meant to show how bags of mail are transferred between a street car and a Post Office horse-drawn wagon.) There is less than a minute and half shown of a major street in Washington DC. Whatever time of day this was, filmed in July 30 1903 (a Thursday), there wasn't much traffic generally, however I am struck by the number of bicycles. It isn't a vast number, but they are clearly being used for transportation by adults. 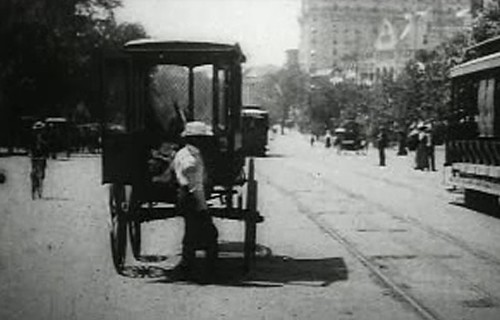 Cyclist appears suddenly at left, proceeds at measured pace out of view 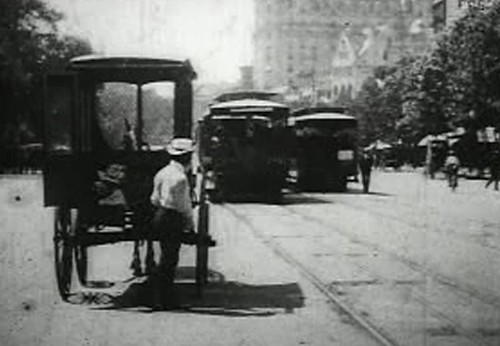 Next cyclist appears at right, again riding at a measured pace 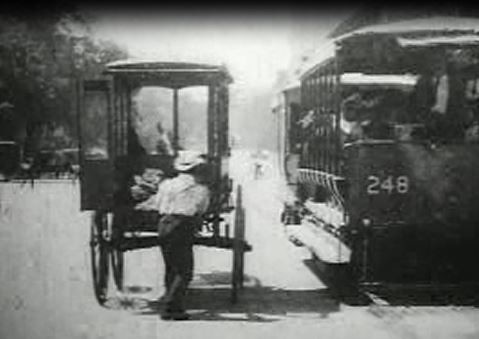 Due to low resolution, it isn't obvious but a cyclist is proceeding right to left on the next cross street in the distance and is just visible in the space been the streetcar and the Post Office wagon. 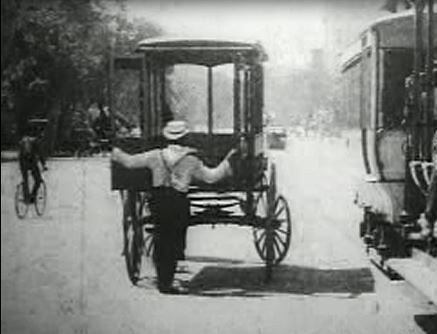 Cyclist rides into view, apparently against the flow of traffic on this side of the street