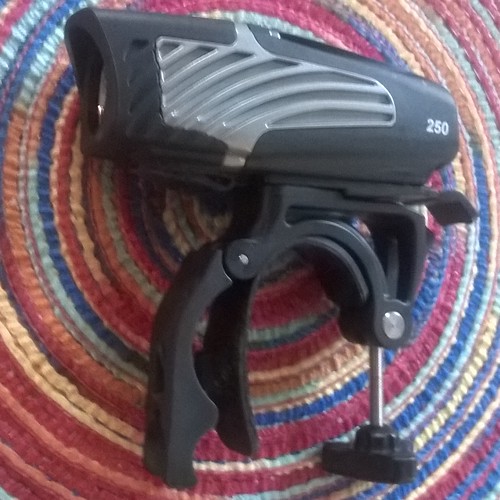 I think it more to do with categories - with cycling clothes, it is simpler for others to think of something that I will enjoy and use than it is for a basic bit of hardware like a light.
Posted by michael neubert at 5:27 PM No comments:

I found the above video on VeloNews - I found it interesting because in some respects it reflects many of the differences between the two different bikes I use for commuting to and from work. I have a 1982 Bridgestone road bike and a 2006 Scattante CFR. The difference in the age of the two bikes I have and the bikes discussed in the video is roughly the same, but obviously a 2014 road bike has some technical advantages over my 2006.

This is not a "period correct" 1982 road bike - the frame and the fork are original 1982 Japanese steel but the rest of it varies by period. The stem and handlebars are from around 1982 but the drive train and brakes are from the late 1980s - I wanted something more advanced, particularly for the brakes. The wheels, seat post, and saddle are new. I added fenders to make it a good bike to ride in rainy weather.

(I have blogged about this bike before - anyway, I find it pleasing because I bought the frame for less than 100 dollars on eBay and it has a number of rather amazing features, including the Tange headset, fork and crown, and Tange lugs. The doublebutted tubes are from Bridgestone. But this Bridgestone precedes Grant Petersen's association with Bridgestone road bike design, alas.)

There is nothing special about this frame as such except that at the time I bought it, it was the entry level all carbon fiber frame from Performance Bike - the bike came with mostly Ultegra or other reasonably good components and no Performance house brand junk.

My carbon fiber bike with pedals weighs around 20 pounds while the Bridgestone weighs about 25-26. (On the video they also talk about a five pound or two kilo difference, but I think they are talking about 15-16 pounds for the carbon fiber bike and around 20-21 for the steel bike.) I sense that the weight matters mostly when trying to climb hills, but that isn't generally a problem with the rides I do around here. The video describes the introduction of integrated brake lever-shifters as of almost as much significance as the introduction of derailleurs, but that seems a little crazy. If you ride bikes with downtube shifters (like the older one has) regularly enough it isn't that big a deal - the downtube shifters are located right along an arc that your hand travels down in that direction so I never have to look. Even when braking, mostly one is braking with the left hand and shifting down with the right hand - no problem. And I find the maintenance for a road bike that is used for commuting is much less with the downtube shifters than with the brifters, which can be annoying to maintain and expensive to replace (and generally not easily repaired) if something goes wrong inside of one.

I think it is interesting that he the guy on the older bike says that the leather soled shoes give up "80 watts every revolution" but that the clip-in pedals otherwise are not better than using toe-straps. It isn't even that clear that having your feet secured to the pedals (however it is done) increases overall efficiency in pedaling.

I am certain that I am able to average a higher speed when riding the carbon fiber bike, but I think it is largely because it has an 11-25 set of ten rings in back while the steel road bike has only 7 rings, running from 28 to 11. My optimum cadence is apparently narrow because it isn't that unusual that I find on the steel bike that I am not challenged by a particular gear but am uncomfortable with the next one up - this is rarely a problem with the bike with 10 rings.

Some of the modern differences don't affect their relative performance as far as I can see. I understand that the modern threadless headset is intrinsically stronger than the threaded headset in the steel bike (that is original, from 1982) but it isn't obvious to me that it matters in every day riding. One comment the rider on the older bike in the video makes is that the small steel tubing looks less strong to him compared to the oversized carbon fiber tubing - this is amazing to me since I get my sense of the strength of the materials from pinging the tubes with a finger - the carbon fiber feels like nothing, while the steel tubing feels like (duh) steel!

At some point the fellow on the steel bike comments on the smoothness of the ride, apparently attributing that to the steel frame. I guess I am somewhat doubtful - I understand that aluminum frames transmitted road roughness a lot, but my impression is that my carbon fiber and my steel bike are mostly differentiated in how they smooth the road by how much air I put in the tires, and the size of the tires. I have 25 mm tires on the steel bike - if I take them up over 100 pounds per square inch, the ride is pretty stiff and picks up everything. The 23 mm tires on the carbon fiber bike can go much higher, but anywhere over 110 pounds per square inch and the ride just picks up too much road noise to be pleasant. Apparently frame stiffness is a fairly complicated issue but I think both my steel bike and carbon fiber bike flex enough. But not too much.

I don't have the desire right now to complain about this bike that I also own (but it now in an unusable state), which I am suspicious suffers from an overly stiff tube design. And is too complicated in a number of ways. Ugh.
Posted by michael neubert at 8:53 PM No comments:


Christmas of 1930. Norma Horydczak on bicycle in front of Christmas tree, wide view


A DC scene with bicycles from Horydczak, exact year unknown
Posted by michael neubert at 9:29 AM No comments:


Detail from photo shows two boys with their bicycles

While children's bicycles were certainly produced during this period, like many photographs one sees of children with bikes, these boys have bicycles intended for adults that are by the usual sizing guidance much too large. Apparently once one was ten years old or so, an adult bike was considered close enough in size to work.
Posted by michael neubert at 10:30 AM No comments:

For some reason this item has not been "evaluated" for its "right status" so the higher resolution images are not generally available for download off site. However obviously 1895 is before 1923.

Posted by michael neubert at 6:16 PM No comments: