The Cyclist's Bucket List: A Celebration of 75 Quintessential Cycling Experiences by Ian Dille


The inside of the dust jacket states that the book "catalogs both the iconic and little known-the accessible and aspirational-sensory and emotional experiences that instill cyclists with a deep passion for the sport."

Well, perhaps. The book is organized geographically, by continent (more or less). The number of "experiences" described per region varies considerably - Africa gets one (although it crosses the entire continent north-to-south) while North America gets 33.

The type of "cycling experiences" described range from truly iconic professional races such as Paris-Roubaix to identification of places that would be nice to ride, such as the San Juan Islands of Washington state or Moab of Utah. The length and quality of the descriptions also varies widely.

For a coffee table sort of book, there are, when you stop to think about it, remarkably few photographs. Several of the two or three page descriptions, such as of RAGBRAI, have no photographs at all. Other than a few photos of the Tour d'Afrique at the beginning (provided by the Tour's organization) the rest seem to be purchases from Getty Images or the like, not produced for this book, shot by different photographers. They all meet the requirements of typical Bicycling magazine "dramatic place bicycle photography."

There is some "get there" and other on-the-spot information that might be helpful to someone who chose to read about one of these rides with an interest in actually doing one, but not much - this is in no way (OK, perhaps in a slight way) a reference book for embarking on these rides.

A public library near you may have this book. Sure, check it out, look through it, return it. It won't disappoint in that case. But this is not a cycling book to own and return to again and again.

View all my reviews in GoodReads of cycling books.

Posted by michael neubert at 1:15 PM No comments:

Official Handbook [of 1890] of the League of American Wheelmen

Official hand-book / League of American Wheelmen
Published in New York City in 1890. From the collections of the Library of Congress.

Explanation of the contents on the title page:
COMPLETE LIST OF LOCAL CONSULS, LEAGUE HOTELS AND RATES, AND REPAIR SHOPS IN THE UNITED STATES; THE POLICY OF THE NATIONAL GOVERNMENT FOR 1890; SYNOPSIS OF STATE LAWS REGARDING WHEELMEN; THE L. A. W. CONSTITUTION AND BY-LAWS; RACING RECORDS, REGISTER OF BICYCLE CLUBS IN THE COUNTRY, NAMES OF OFFICERS AND NUMBER OF MEMBERS; ARTICLES ON THE ROAD QUESTION; TOURING, ETC.

In my previous blog post I linked to a book "Tourists' Manual and Book of Information of Value to all Bicyclers" published in 1892, two years after this time. The illustrations of the two books show the evolution during this brief period so that by 1892 a "safety bicycle" already looked much like a modern bicycle, as opposed to the safety bicycles of 1890, which look a little odd or strange by comparison.

Posted by michael neubert at 10:23 AM No comments:

Tourists' manual and book of information of value to all bicyclers, by Pope Manufacturing Company
Published in 1892. From the Library of Congress.
Posted by michael neubert at 11:27 AM No comments: 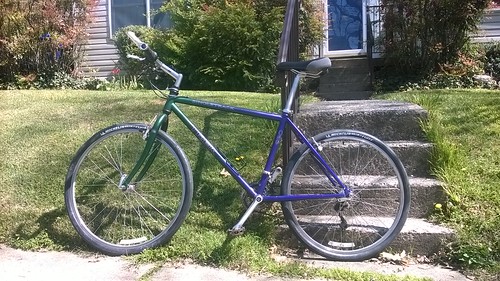 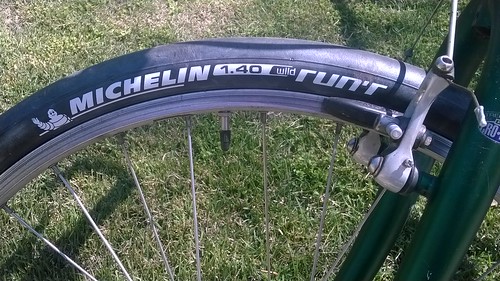 When I bought this bike, it had some Kenda knobby tires that are 1.95 inches wide (according to the sidewall) installed. Ths rims of this bike are a little narrower than the wheels on newer mountain bikes I have and the 1.95 tires looked a little odd on the more narrow rims. Also, they are noisy when riding, even when pumped up, and likely do little to make the bike zippy.

I found these Michelin Runn'r tires at Bike Tires Direct. There are supposedly made of the same rubber compound as road bike tires (although lots more of it) and yet only cost around 16 dollars each. The sidewall says that the max inflation is 87 psi, but at 75 they seemed plenty hard enough. Bike rides great with these.
Posted by michael neubert at 12:20 PM No comments: 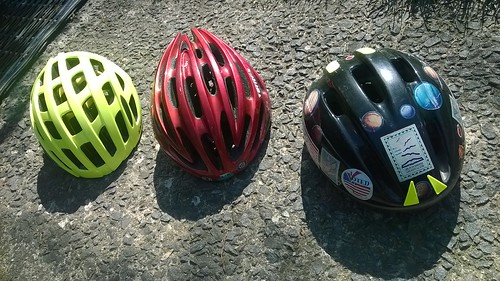 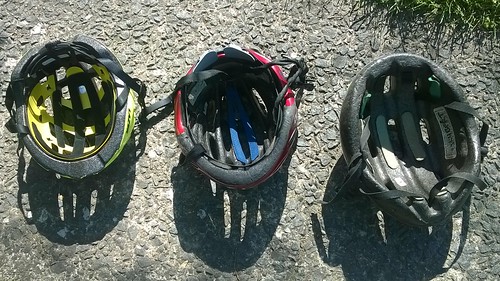 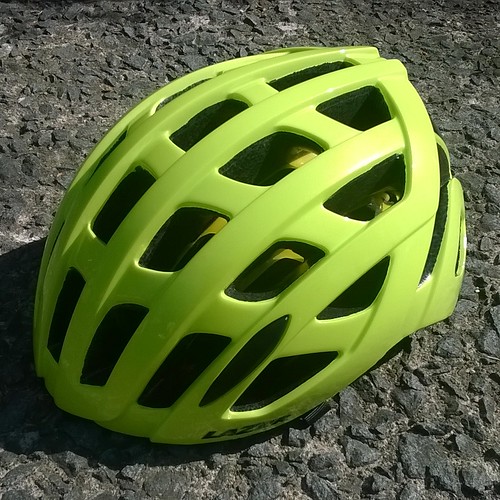 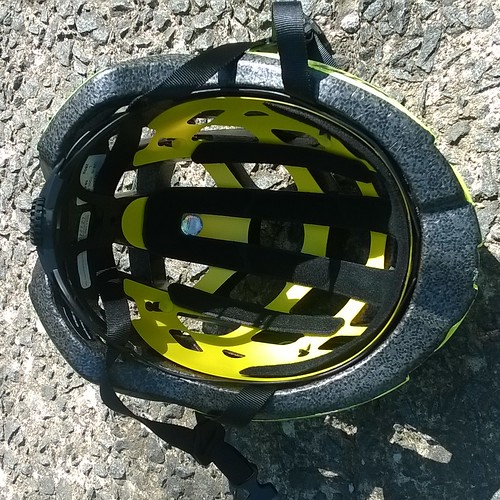 Posted by michael neubert at 8:34 PM No comments:

What I find pleasing is the variety. 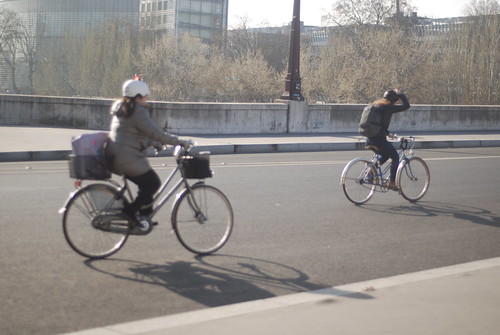 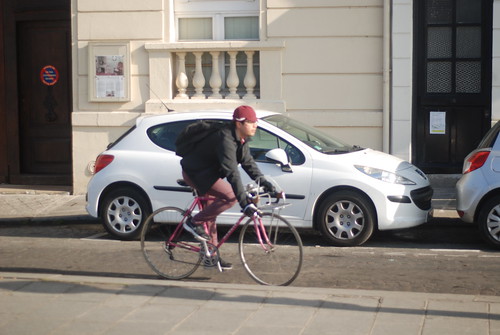 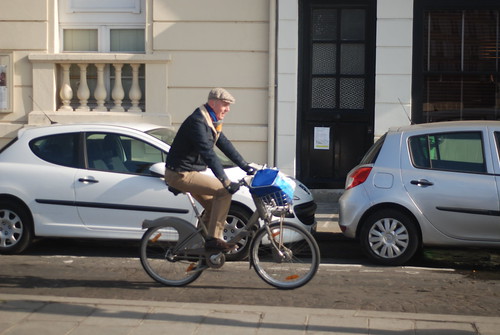 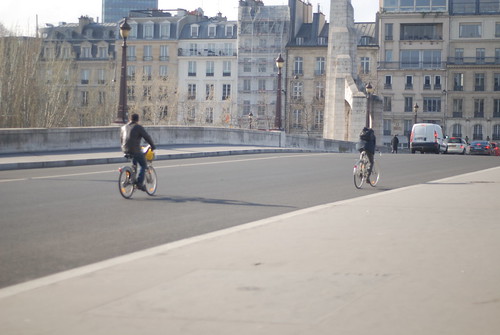 Posted by michael neubert at 8:45 PM No comments: 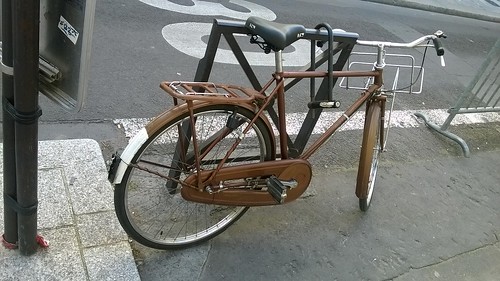 Raleigh Sports bike from 40 or so years ago, much like one I have at home

I have a very similar bike from what must be about the same time period. This one, parked on the streets for many years (one assumes) is in remarkably good condition - much better than the one I have (which I got only a few years ago from someone giving it away). It has some superficial differences - the rear rack that clearly came with it, for example, and the full rather than partial chain guard. But it also has a very surprising (to me) difference - the brake system is not a cable-pull system with caliper braking front and back but rather front and back rod-driven brakes that bring brake pads up against the inside of the rim. Just as a traditional caliper brake uses the rim like the disk of a disk brake system, this is like an open drum brake using the entire rim as the drum, but only pressing on one side. I don't even know what this is called. I am quite doubtful as to how efficient it might be. 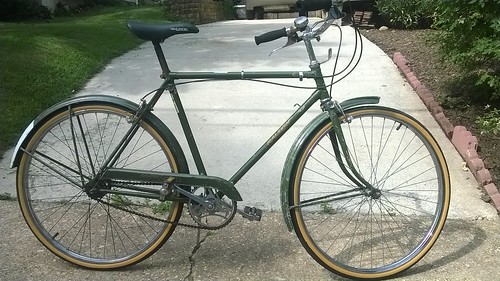 My 1973 Raleigh Sports, much the same except where it is completely different 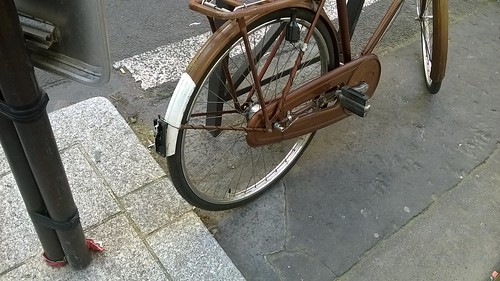 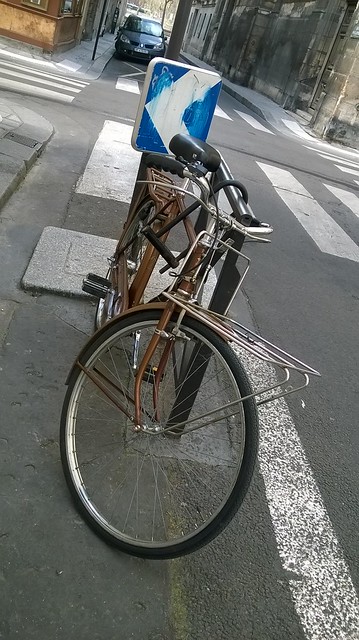 Impressive front porteur rack - that would look good on mine! 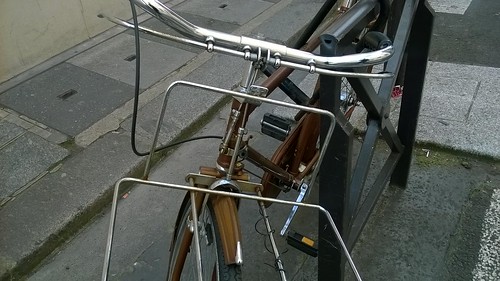 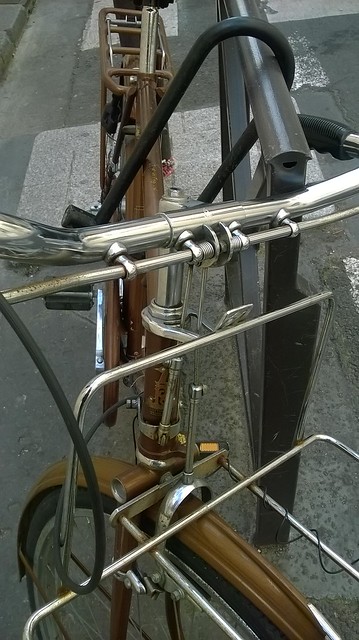 Between the rack and the rods for the brakes, there are a lot of chrome bits of metal here 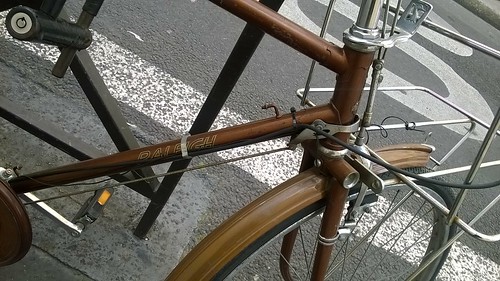 Note rod to activate rear brake under down tube

Posted by michael neubert at 10:11 AM No comments:

Sunday Ride Along the Seine (March 20)

On Sundays in Paris various streets and roads are closed to vehicular traffic, including a stretch along the Seine river.

My wife and I were in Paris for a week in March. The weather was seasonal - so it wasn't too warm, but not cold, either. We didn't have any rain until the day we left. We were right in the middle of the city. One of the lovely things about Paris is that you can rent a Velib bikeshare bike for almost nothing for a week - 8 euros. Yes, 8 euros for an entire seven days! This can be done easily online in advance, and you get an account number and a pin number (which you have to keep track of). It is very nice to have available as a travel option. 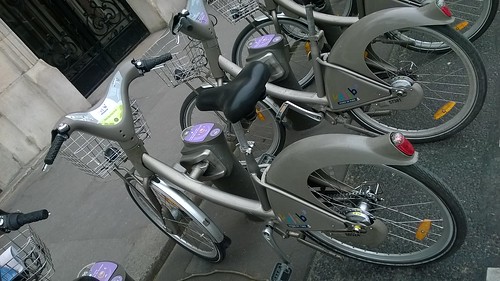 These are the best not-very-good bikes in the world! 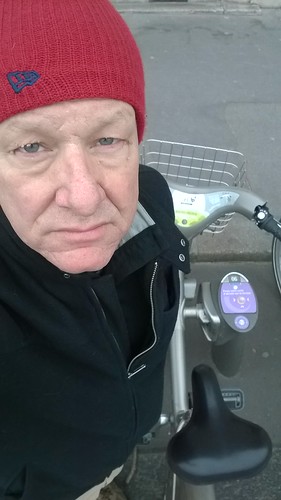 It was a little cool 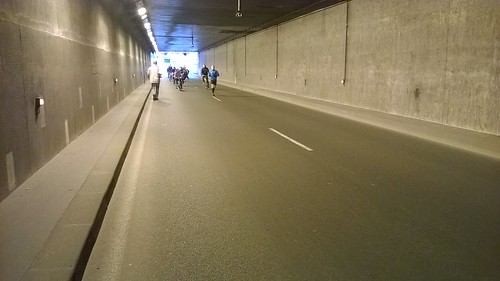 One of the traffic tunnels that are part of the route 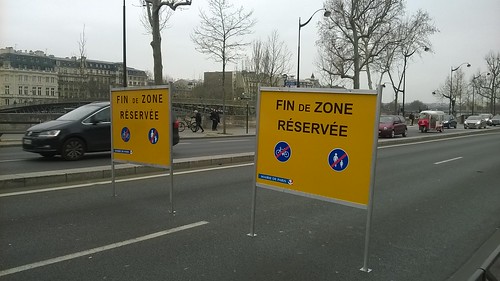 Marker for the end of the closed off section 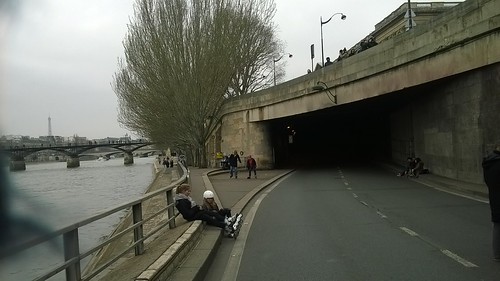 Entrance to traffic tunnel near northwest end of route

I didn't take photos with very many people in them, for some reason, but I thought for a cool cloudy Sunday that there were a fair number of people out, on bike, skates, hoverboards (a hoverboard training class), skateboards, and of course walking. 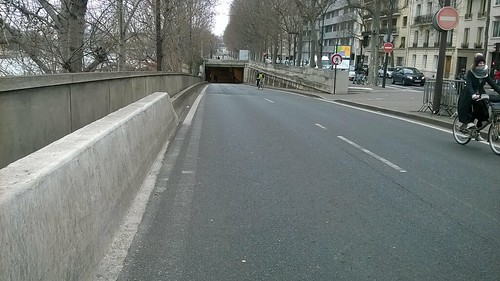 Looking back into another tunnel 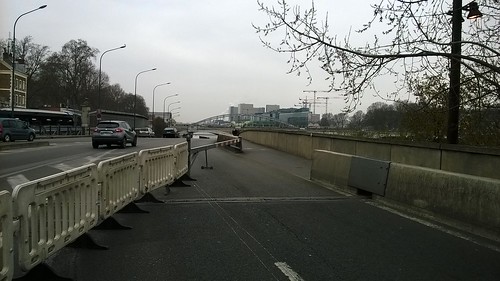 Other end of the ride

In the distance, along the far side of the river, the four towers of the main building of the National Library of France are visible.

Posted by michael neubert at 8:53 AM No comments: