This short movie from the collections of the Library of Congress shows two post office boxes on a street corner and was apparently intended to show how the Post Office employees serviced them. Separately the video shows something of what street traffic was like, including persons on bicycles, which from my perspective is far more interesting. (The video is not identified with any tags or other access points suggesting cyclists are part of this. Typical.) 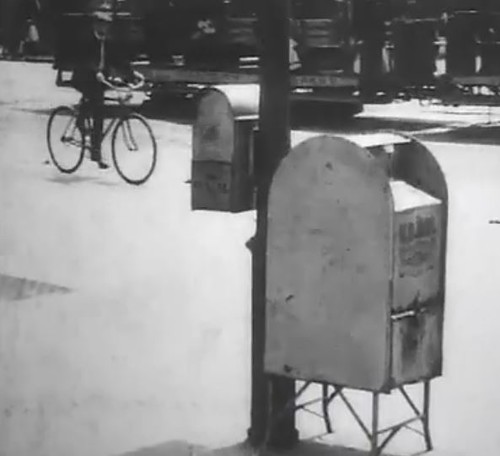 First cyclist enters screen from left at around 15 seconds, riding parallel to a streetcar

The first bicycle rider shown looks to be an adult man riding at a moderate pace, likely to get from one place to another - bicycle as transportation that is faster than walking and less elaborate than using a horse-drawn carriage. 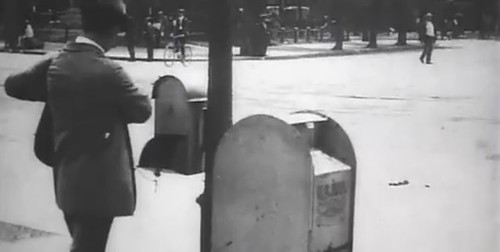 At about 20 seconds, second cyclist appears in upper middle of screen as traffic clears, riding across intersection from cross street

Much like the first bicycle rider, bicycle as transportation. I was amused by the man walking across the street in another direction, who ambles rather casually.

At 28 seconds, third cyclist appears from left, who has a boy sitting on the handlebars as a passenger

All the cyclists shown are traveling at a moderate pace. If you look closely, you can see the rider here pedaling steadily. It is almost certainly a single-speed bike. 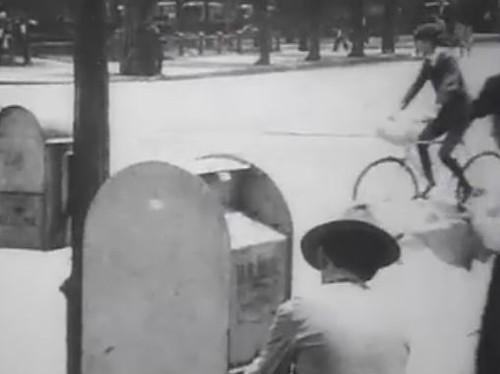 At 32 seconds, fourth and last cyclist appears from right, cutting through the intersection

A little hard to tell, but this appears to be a younger rider, moving at a faster (but not that much) pace. He seems to ride in front of two women who are going to cross the street. He has a bag of some kind in his hand held to the handlebars.

No bicycle shown here, but you can see four different horse-drawn carriages at once near this Washington DC intersection in 1903

Most of the "traffic" shown during the video consists of horse-drawn carriages. Two different streetcars pass, one in either direction. There are a moderate number of pedestrians, and then the four cyclists, one with passenger. All the traffic is moving at a moderate pace - the horse-drawn carriages in particular. Most of the pedestrians are shown walking briskly and enter the intersection without pause - one suspects that absent many cars, concern about entering intersections was much more casual.

One assumes that this was shot during the middle of the day and that the various traffic elements are representative. The use of bicycles looks pretty high. Interesting.