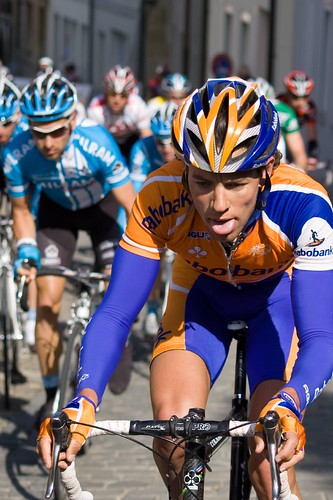 Apparently there is a sub-category now of cycling literature, the "I was a great bicycle racer, but then somehow I became a doper and it all went to hell" tell-all, as-told-to-someone-who-can-write memoir. We have Tyler Hamilton's "The Secret Race: Inside the Hidden World of the Tour de France: Doping, Cover-ups, and Winning at All Costs" (2012) and then there is David Millar's "Racing Through the Dark" (2011). Mr. Dekker is a little late to this activity, since all three are reporting on much the same period of doping, but Dekker attempted to continue his career later than the other two so only got around to publishing this late in 2016 (in Dutch; the English version was published in the US about a year later).

As a highly successful Dutch bike racer in a land of cyclists, Dekker was presumably as much of a name there as Lance Armstrong had become here. In Dutch, the title of his book was "mijn gevecht" which apparently translates to "My Fight" (or maybe "My Struggle"?). With himself, I guess.

I thought that to be clever they used "descent" as the title in the English version since cyclists who win typically have to be good at descending mountains as well as racing up them, to give the title kind of a double meaning, but in reading it I eventually decided that was just coincidence. The cover of the Dutch version has Dekker in 3/4 profile, looking as come-hither as a sanctioned cyclist-doper can for his Dutch admirers. It's a little . . . odd.

I gave this two stars because . . . well, I didn't really like this book. It was pretty depressing, in fact. The main plus is that it is just over 200 pages with fairly large print - it is a fast read.

Tyler Hamilton's book was not so heavily focused on doping, he talked a lot about racing. The discussion of doping was mostly amusing since it became clear that he ran into problems largely because the team he was on after being with Lance Armstrong didn't spend the kind of resources organizing doping and that Hamilton realized eventually that poorly organized doping is not a good idea once he accidentally ends up with someone else's blood transfused into his system instead of his own. Oops! David Millar's book is hideous because it talks way too much about David Millar - but even he has more blow-by-blow description of races he was in than this book. "My epic fall from cycling superstardom to doping dead end" means you read far more about doping as well as drugging and drinking and sleeping with hundreds (his word) of women than about any races he was in. One wonders why VeloPress thought it was publishing a book about cycling. There are endless examples of how he wasted money, giving Euro values in most cases - 25,000 Euro for this evening, etc. Ugh. Simply ugh. (The apparent need to list his Euro salaries for all the different years he worked is just plain weird. I half expected him to say how much he got for writing this book.) And there is certainly far more detail about the mechanics of doping as he practiced it, and a fair amount of description of how members, managers, and others of his now defunct Rabobank cycling team supported his and others' doping.

I read to the end - now not sure why. Does he make some statement or apology at the end that redeems himself at the end? Spoiler alert that probably isn't a surprise - no, he doesn't.

I might have felt better about investing the time to read this if I had come away with some understanding (or feeling of understanding) of why someone would do this, why he did this. This is almost entirely missing, other than that it was the culture of the team and (in effect) "everyone did it" (although he does mention at least one other rider who didn't, but who only had moderate results). He describes the trip down but makes no attempt to explain what we might be able to learn from this from his perspective.
Posted by michael neubert at 10:15 PM