Lance Armstrong in the Public Domain & Other Finds in "The Commons"

The Flickr Commons has many interesting digitized historical photographs of cycling and also the (very) occasional original "born digital" photograph as well - these are believed to be in the public domain or otherwise under some Creative Commons type license and available for use in things like my blog. So occasionally I go through the search results in the Flickr Commons for "bicycle" just to see what is there. Since the search results include items in Flickr where users have added tags, the available search terms are often more than if one did searching in the "native" system. So for example, a user may tag a photo from the Library of Congress with a bicycle in the background with the word "bicycle" when the Library of Congress would not have that as a search term associated with that photograph. 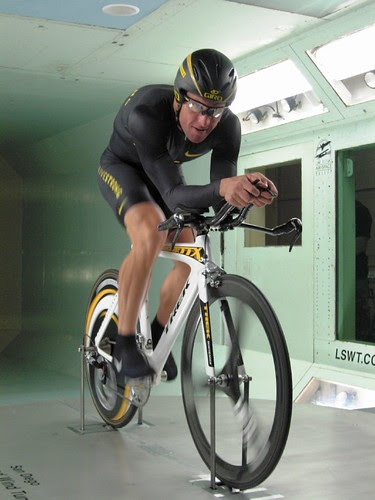 The San Diego Air & Space Museum Archives has an unusually large number of photographs, both digitized and "born digital," in the Flickr Commons - about 166,000. Among those are a few tagged with "bicycle." The photo above is unusual generally for the Flickr Commons because it is a photograph of a public figure, Lance Armstrong, taken relatively recently (2008), and in the public domain. Or anyway, the statement is that, "there are no known copyright restrictions." Perhaps in their hurry to put material online, the amount of metadata supplied for any item can be minimal - here the title is "wind tunnel (2)" and that's all there is - Lance Armstrong is not named (or searchable). 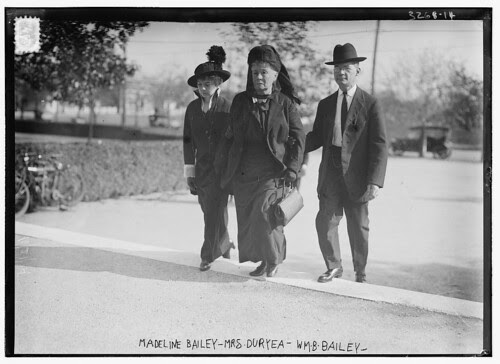 Blurry bicycle in the background, off to the left

Above is an example where the user-added tags include bicycle, resulting in a "hit" for this photograph, although most users will not find this particularly helpful since the bicycle is so blurry as to be unidentifiable other than that it is a bicycle. Although perhaps someone might find useful the presentation of the opportunistic nature of bicycle parking in 1910 (as compared to today). 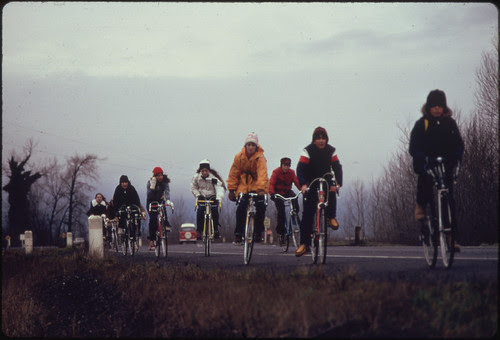 The National Archives has some digitized photographs (including a few with bicycles) from after 1923, after which U.S. published materials (well other than music . . .) are generally not in the public domain. I am particularly amused by some photographs that document life during the "gas crisis" of the 1970s. The caption for the above photo states that, "School Children, Were Forced to Use Their Bicycles on Field Trips During the Fuel Crisis in the Winter of 1974. There Was Not Enough Gasoline for School Buses to Be Used for Extracurricular Activities, Even During Dark and Rainy Weather 02/1974." Apparently (and perhaps not surprisingly) things were more dire in Oregon in this regard than they were in Washington DC - I don't remember this level of deprivation around here. The children depicted all seem to have road bikes - was that typical in Oregon? It sure wasn't here. That I recall.