The "American Girl" of 1897 - to be Thankful for on Thanksgiving

In the St. Paul Globe newspaper this article was titled "The Queen of Thanksgiving" but the same article was published in a number of newspapers across the country (with various titles). The article has a large illustration portraying the American girl (or woman, really) of 1897 in various settings. 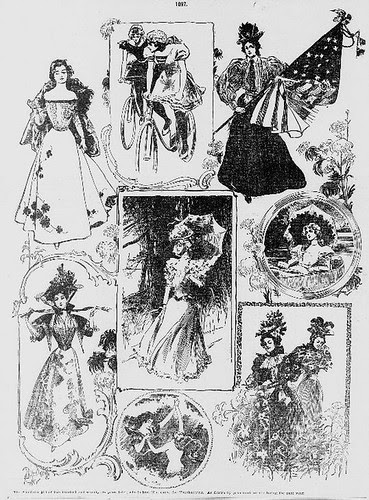 The full text of this article in the Sunday November 21, 1897 issue of the St. Paul Globe talks about many positive aspects of the "American Girl," stating that, ". . . Thanksgiving day, '97, will find the American girl, as all other Thanksgivings have found her, not emancipated, for she never was enslaved, but free as the bright, frosty air that wooes her athletic frame, sending the bleed coursing swiftly through her veins and imprinting the charming tinge of robust health on her cheeks." One can argue that point, of course, but the description of women and cycling that follows seems to suggest that some things have been changing:


A good place to view her at her best will be from the sidewalk of any smooth-paved street of our cities, or from the pathways of macadamized country roads. Here, in the nattiest and newest of bicycle rigs, she will be seen, with her cheeks aglow, her bright eyes sparkling, her pretty hair dancing merrily in the wind, bowling along a-wheel at a pace that surely has nothing in common with chains or fetters, unless it be the bicycle chain that enables her to challenge the wind to a trial of speed and beat the old flirt in a canter. The manner in which the American girl has taken advantage of this glorious sport bears ample testimony to the fact that when she wants a thing she will have it and knows how to take the fullest advantage of what is hers by right. If the shades of the dear old grandmothers of the days of wheel and distaff could return to earth next Thursday and gather along the highways and byways where laughing, chaffing, free and happy columns of wheelwomen fly by, they will surely return to the land of shadows with feelings of regret that their lot was not cast in an era when women find more healthful means of employing their time than the laborious and confining duties of the old-fashioned home life. That the change is vastly for the better even the most disgruntled and cross-grained critic of the up to-date womanhood will admit. Instead of the pale-faced, narrow-chested woman of the wheel and distaff era, the spectator who chooses a front seat to view the passing show of Thanksgiving day '97 will see a long procession of rosy-cheeked, lithe-limbed, happy, healthy and wholesome specimens of femininity that speak contentment in every action. 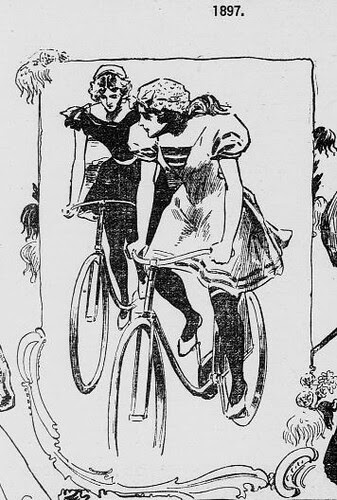 Bicycling "American girls" - to be thankful for on Thanksgiving

There is a certain polemical aspect to this that speaks to the power relationship between men and women at that time which I think it is possible to separate from the way that women and and cycling are portrayed. In other words, trying to say that women are don't need emancipation because they enjoy the benefits of cycling is not a terribly good argument against emancipation, but the way women and cycling in 1897 are described here (aside from the period writing style) tells us that cycling was in fact a change for women at that time. Just not the last change . . .

Posted by michael neubert at 11:19 AM