Paging through issues online of the 1898 "Cycle Age and Trade Review" I found in the November 10, 1898 issue a remarkable article with two illustrations of what seems to be a monster cargo bike - but alas, by this time, this "cycling" journal was starting to include articles about various motorized vehicles as well.

The eye-catching cargo trike - with gasoline engine, it turns out 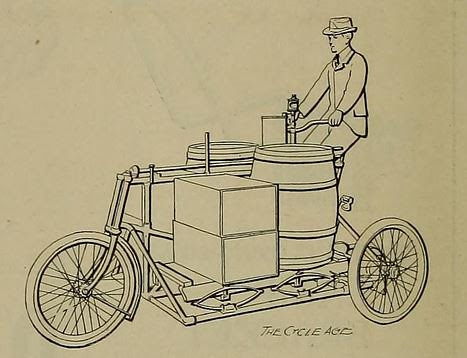 Detail view, that hides the engine from inspection

Pope Mfg. Co. of Hartford, Conn., has published a pamphlet describing the carrier vehicles shown in the accompanying illustration. The merchandise capacity of the vehicle is rated at 500 pounds under which it will give its regular speed and power. The structural strength, however, is sufficient to permit a load of 600 or 650 pounds, although under this extra weight the motor will not develop its normal speed. The form and design of the carrying bodies are not necessarily as shown, but may be varied to suit different requirements. The two styles illustrated show wide variation between a light motor truck wagon and a closed-up affair such as would be suitable for a dry goods establishment. The motor is a specially designed gasoline engine for which no water jacket or other cooling device is necessary, thereby saving many complications and much weight, says the company. A supply of gasoline which is sufficient for about 100 miles travel is carried in a tank attached to the frame between the boxes. Like all gas or gasoline motors, the first explosion must be obtained by physical effort, and bicycle cranks and pedals were adopted to give the desired result in the easiest and most satisfactory manner. By the attachment of a clutch with chain and sprocket to the shaft of the driving wheels, foot power may be used to assist the motor when on steep grades, obtaining higher speed than the auxiliary low gear of the motor would normally produce. When the cranks and pedals are not in use they remain stationary. The normal weight of this carrier vehicle is given as 750 pounds.

Pope was the manufacturer of Columbia bicycles (I was not familiar with this identity, "Pope Motor Carriers") and I had not realized the degree to which some of their motorized products were hybrids with their products as this one is. Of course this may only have been a design prospectus and never produced or sold.

It's an interesting idea, to have the pedals used for the kickstarter function to start the gasoline motor and then as a supplementary power source when useful.