Kickstarter Your Way Out of Sweating

One of the "problems" that apparently needs solving is to create a bicycle that requires less effort to pedal. One doesn't want to "break a sweat" after all.

Electric bikes have been increasingly popular worldwide - even (or particularly) in places where bicycles are a more serious form of everyday transportation than in the U.S., such as the Netherlands.

"Smart Wheel is a pedal assist which means it helps you ride your bike effortlessly. The motor turns on when you start pedaling and begins accelerating to your desired speed. It stops when you stop. It saves you time by getting you to your destination faster and gets you there without losing your breath or breaking a sweat. There’s no need to worry about what to wear to that business meeting or 8 o’clock date."

The clever aspect of this Kickstarter, which is aimed at urban residents who already have a bicycle but aren't always interested in using it as much as they perhaps hoped and for any one of several possible reasons don't want to buy a purpose-built electric bike, is that it supports an easy and not too expensive conversion of an existing bike to an electric bike. In fact, one can easily switch back and forth by swapping in the standard rear wheel or the e-wheel! Oh and the whole shebang is controlled by your smartphone that you attach the handlebars. And a smartphone recharging system is helpfully part of the deal.

Of course the only fun in looking at Kickstarters like this is in critiquing them. Yeah.

* Purpose-built electric bikes are typically heavy. This wheel weighs only 9 pounds and has both the motor and the batteries in it - in fact, nothing more is required than the smartphone to control it. So leaving aside the phone, it only adds 7-8 pounds to the previous weight of whatever bike you use it with. But a reason that electric bikes are heavy is not just because their electric bike specific components (batteries, motors, controls) add more weight (than this one) but also because the whole bike is built up to support heavier loads since the force propelling it is now not just your legs. In particular, the brakes of your average bike intended to be ridden around at 9-10 mph are going to be working hard to stop a bike that now weighs 1/4 to 1/3 more that is routinely going 15-20 mph. So you would likely end up having more maintenance issues with a bike not designed with such use in mind and some safety issues with stopping, at least potentially.

* Carrying the bike up stairs - an obvious advantage for urban residents in apartments is a bike that isn't so heavy that you can't easily carry it up stairs. Arguably taking the typical bikes they are showing that weigh 25-30 pounds as manufactured and then adding 7-8 more pounds will result in a bike that can be carried easily by some people up stairs but by others not so much.

* Smart phone controlled - OK, I'm not strictly speaking a Luddite but the idea that I need to manage my bicycle through my smartphone takes away a considerable amount of the elegant simplicity of what a bike is. However since many if not most people now have some such device with them anyway, avoiding the extra weight of a specific control system for the e-wheel makes sense.

* The smart phone charging system - the cell phone charging system relies on a wired connection to a type of generator that is still used in Europe but is not very commonly seen now in the U.S., where a small wheel presses against the tire and drives the generator - a so-called dynamo generator. I had one of those on a bike when I was a teenager! On some level, given the rest of it, the thing is charmingly retro. I guess. But arguably it is a necessity only because your bicycle, with this wheel, requires your working smartphone and that in turns requires it is juiced up. So one is stuck by extension with providing an independent charging source for the smartphone.

* Anti-theft system - locking the wheel. Uh, they must be kidding. You would still need to lock this thing up, and in NYC that would require a locking system that weighs as much or more than the wheel. (In fact, a bike like this would be a high theft target, with its exotic wheel.) While in a certain way it may be helpful to have the GPS to find it when it is stolen, this is a poor substitute generally for not having it stolen in the first place.

* The gearing - in response to a question on this point, it says, "Smart Wheel is actually fully compatible with multi-geared bikes since the rear gear cassette gets removed together with your old rear wheel once you replace it with the Smart Wheel. This of course turns your bike into a single-speed bicycle but we don't see that being much of a problem since shifting is no longer necessary beause Smart Wheel is already doing most of the work for you." Leaving aside a bike with a front derailleur (that would remain and could presumably still be used) it appears that the e-wheel has 18 teeth, so in order to ride the bike with its pedal assist at 20 miles per hour you would have to maintain a pretty high cadence (how fast you turn the pedals) even if you aren't using much force to do so. This assumes that smart phone control aside that "pedal assist" means that in order for the motor to apply force, you have to be pedaling.

* Riding in the rain - the photo in the Kickstarter shows a woman riding a bike with no fenders, just of those plastic things that sticks out vaguely over the rear wheel. What one learns after riding a bike with properly fitted full fenders is that it is really the front fender that does the most useful work, keeping your feet dry by keeping water from flying from the front wheel into the frame of the bike and then down onto your circling feet in a more or less continuous stream as you ride. This isn't so much a drawback of it being an e-bike, but it would seem to me that in order to have a good example of an all weather bike they should have shown the rider in rain with full fenders.

But no worries - this thing is well over-funded by folks looking forward to early delivery of their own one of these things from the Kickstarter store as a Kickstarter "reward."

Interestingly while FlyKly.com is now all about their Smart Wheel for bikes, they have also worked on e-motor scooter development as evidenced by photos of the things in Flickr. Good e-scooters would seem in some ways more helpful for society since the gas powered scooters that are increasingly popular around here with folks who can't afford cars and don't want to use transit seems problematic in various ways, some of which would be addressed by a electric version. 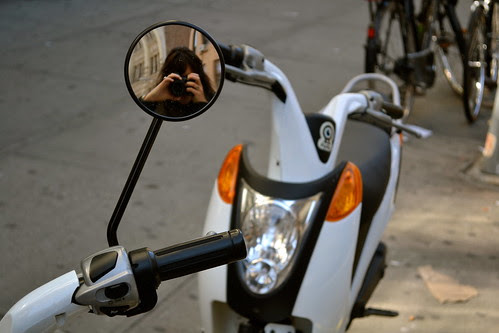