Today the NYTimes has an opinion piece titled, "Is It O.K. to Kill Cyclist?" It takes a meandering approach to the subject, so summarizing it accurately isn't something I am going to try to do, but a few aspects jump out at me.

It's a step in some direction (whether forward or back may vary depending on one's perspective) that someone has published something in a broad circulation publication that says we have a car culture that tolerates cyclists getting killed on a pretty regular basis with no legal consequences for motorists who are at fault, unless the motorist flees (hit-and-run) or was drunk. And he ties this to the obvious point that in car-cyclist crashes, "only cyclists have much to fear." The apparent answer to the question in the title of the piece is, "yes, generally it is OK to kill cyclists with your car." That's radical, even for the NYTimes.

In fact, it reminds me of one of the reoccurring rants from Bike Snob NYC, who in recent months has revisited the lack of culpability for motorists who kill cyclists often. But Mr. Snob brings approaches the subject with several differences that I think are significant.

For one thing, Mr. Snob usually brings in the pedestrians, and points out that the better way to think of this problem isn't "all powerful (and protected, in several senses) motorists vs vulnerable cyclists" - he adds in the vulnerable pedestrians. Because when you look at the highway statistics, what you see is that motorists kill a lot more pedestrians than cyclists. The way to look at this is to use the "Complete Streets" model - not reducing the conversation to "a vs b" when it really should be a discussion of what serves all the road users so that none are at high risk is better, and to his credit, that is the way Mr. Snob approaches it (even though he is not particularly pedestrian oriented otherwise).

I find it exceptionally annoying that the NYTimes' author drags into his discussion that he sees cyclists routinely "ignore traffic laws" - that much of the problem must come from that. This seems to come up all the time - those scofflaw cyclists, it's all their fault. Strictly speaking, the scofflaw aspect only means that the cyclist is at fault when the cyclist (let's say) doesn't stop for a light and gets into an accident. That one breaks certain laws from time to time and then is in an accident that is the motorist's fault does not absolve the motorist because the cyclist can be presumed to have been breaking laws frequently elsewhere. 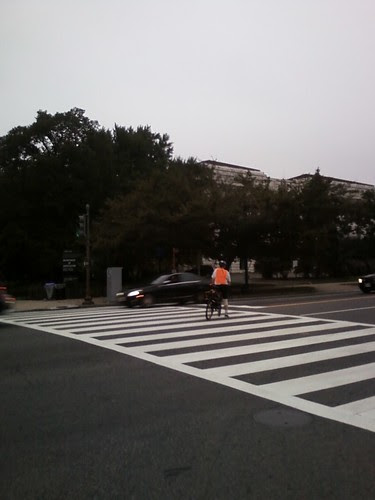 Under the NYTimes writer's logic, this dopey cyclist who is "running" (slowly) a red light is inciting motorists

This fixation on getting cyclists to "obey the law" can be seen in news publications often - yesterday, for example, the "Kearney View" (of Nebraska) has an opinion piece Follow Safety Codes Bicycling on City Streets that is a very politely stated reminder from a motorist that cyclists have rules that they need to follow - but based on the two-times wrong statement that "unsafe cycling puts everyone on the road in danger." Uh no - it isn't all on the cyclists and it isn't the same risk for everyone.

The NYTimes writer closes with this: "So here’s my proposal: Every time you get on a bike, from this moment forward, obey the letter of the law in every traffic exchange everywhere to help drivers (and police officers) view cyclists as predictable users of the road who deserve respect. And every time you get behind the wheel, remember that even the slightest inattention can maim or kill a human being enjoying a legitimate form of transportation."

For me, this "we cyclists can (or gotta, more like it) earn the motorists' respect!" approach is just baloney. The only legislative change advocated for in the piece, stronger penalties for motorists who kill cyclists, is made dependent on that "obey laws/earn respect" mantra.

I am reminded of the Norwegian video that looks at motorist-cyclist interactions that I blogged about recently. The video carefully avoids strong suggestions of fault and rather draws out the often ambiguous nature of cyclist-motorist interactions. It is a "be careful out there" message without the "be legal" argument thrown in.

If we want to focus on passing laws to improve this situation, I think budget laws that direct more resources to Complete Streets style infrastructure is more important long term. And short term.

Posted by michael neubert at 11:08 AM