Riding in snow and ice even with studded tires can be challenging - also if one has any sense, it is important to clean up the bike fairly soon after to get the road salt mix residue off the bike. Wheel spokes in particular are vulnerable to the corrosive effects of that stuff; I am embarrassed (I guess) to admit that one year I rode in some bad weather and then parked the bike in my shed and forgot to clean it - much later I discovered the road glop had eaten its way into several spokes enough that when I gave them a wiggle, they snapped! Lesson learned. Ouch. 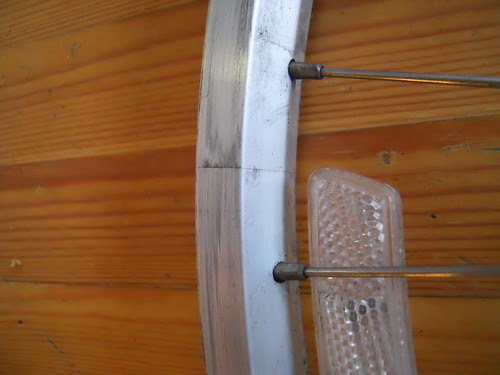 Crack discovered while cleaning the rim

So I took the old mountain bike (a Giant Boulder SE, more than ten years old) that I rode in the snow and cleaned it up and while cleaning the rear wheel I found that the rim had a crack in it. Aggh! What I actually had found, as revealed in a helpful comment (below) is an artifact of the manufacturing process that I had not noticed before. Oops. 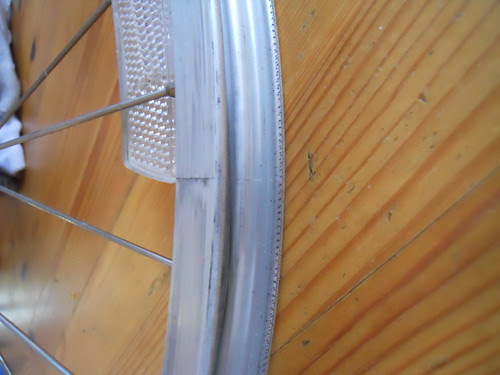 Not surprisingly the crack goes through to inside of rim

Fortunately I have another mountain bike around that I can borrow a wheel from, but I will have to buy a new wheel. 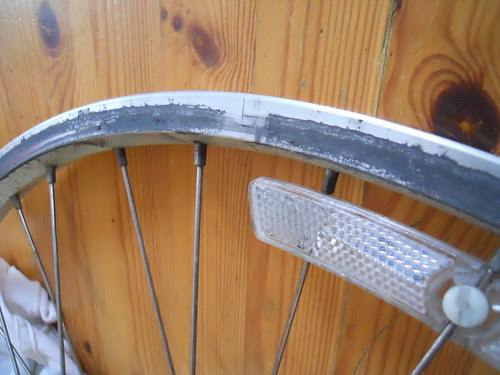 In gloppy weather, brakes make a mess of rims

I didn't need to clean the other side of the wheel now! You can see just how much of the brakes end up on the rims in sloppy weather. I suppose I could buy better brake pads, too.

Anyway, this provides something of an answer to the question of why one gets something better if you spend more on a bike. This is a perfectly OK entry level Giant mountain bike but aside from being fairly heavy none of the components are terribly good (although none are terrible, either). In short I am not particularly surprised to have a cracked wheel on a bike like this. The question arises, at least in my mind, of whether I now take back this comment about low cost bikes and their quality quotient. After some ten minutes of contemplation (intermittently) I guess I would have to say no. I don't.
Posted by michael neubert at 11:58 AM