This book, The Out of door library. Athletic sports. published in 1897, has several chapters about cycling, including "Woman and the Bicycle" by Marguerite Merington. Apparently Ms. Mergington was a playwright. And the bibliographic record tells us that "The chapters in this volume originally appeared in Scribner's magazine."

The text is a little high-flown, or something.

Woman and the Bicycle
By Marguerite Merington

The collocation of woman and the bicycle has not wholly outgrown controversy; but if the woman's taste be for the royal pleasure of glowing exercise in sunlit air, she will do well quietly but firmly to override argument with the best model of a wheel to which she may lay hand.

Never did an athletic pleasure from which the other half is not debarred come into popularity at a more fitting time than cycling has to-day, when a heavy burden of work is laid on all the sisterhood, whether to do good, earn bread, or squander leisure; no outdoor pastime can be more independently pursued, and few are as practicable as many days in a year. The one who fain would ride, and to whom a horse is a wistful dream, at least may hope to realize a wheel. Once purchased, it needs only to be stabled in a passageway, and fed on oil and air. 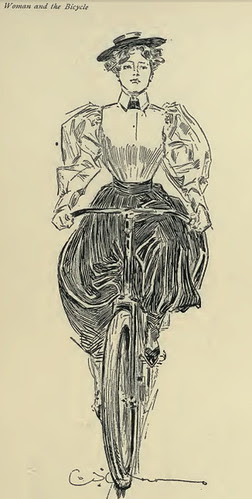 No, this is not nearly as readable as Bicycling for Ladies written by Maria Ward and published in 1896.

Interesting that the text does reveal something about the anticipated pace of riding for a woman rider:

An hour of the wheel means sixty minutes of fresh air and wholesome exercise, and at least eight miles of change of scene; it may well be put down to the credit side of the day's reckoning with flesh and spirit.

Also, as usual much time is spent discussing the best attire for women riders. Here the author indicates that for some riders, special attire was not practical since they might be riding to or from work (for example) that would obviate the ability to wear anything other than clothes suitable for the destination - and that this is OK.

Short rides on level roads can be accomplished with but slight modification of ordinary attire ; and the sailor-hat, shirt-waist, serge skirt uniform, is as much at home on the bicycle as it is anywhere else the world over. The armies of women clerks in Chicago and Washington who go by wheel to business, show that the exercise within bounds need not impair the spick-and-spandy neatness that marks the bread-winning American girl.

The phrase, "armies of women clerks" reminds me of the 1899 video of Parke-Davis employees leaving at the end of the work day that shows a fair number of bicycle riders, both men and women - dressed not in special cycling clothes but in their regular work attire (or so it appears). 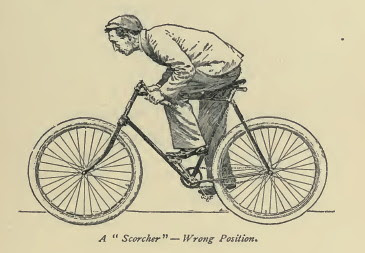 As usual, poor cycling posture is subject to criticism, but a man is used to model this rather than a woman
Posted by michael neubert at 2:46 PM