I took up this blog for various reasons - one was that I kept bumping into "factoids" about cycling history that I felt others would find interesting; also, I thought it might teach me a few things about using certain web-based resources (that otherwise I imagined I understood but didn't have hands on experience with).

I started the blog in May 2009. Some time during the past six months or so, there was a day when I went into Blogger and my blog posts had mostly disappeared. Given how much time I have put into creating them and that I don't have them backed up locally in any way, I remained remarkably calm - anyway, later the same day the posts reappeared, however it now appears that the dates were somehow screwed up. Blogger's cumulative page views now thinks I started getting page views in 2008 when the blog only started in May of 2009. (I hadn't noticed this until now.) Conversely now none of the blog posts themselves are dated before July 31 2010 - during the first bunch of posts (as dated now), there are many instances of multiple posts on one day, which I don't think I was doing. So somehow the dates assigned to the posts got messed up. Since all the posts still seem to be there, I guess that's not a big deal, but it's . . . weird.

I had a blog post in June 2011 when I talked about having blogged for two years with some statistics - this earlier post confirmed I wasn't losing my mind.

Blogger stats from March 2012, when the blog had a lot of growth

Since April 2012 I have had a significant drop in average daily page views - it was around 150 per day and now it is more like 90-100. Most of my page views are driven by Google searches, so I can't imagine what change occurred that drove the page views down. I have only added "content" that can be the target of searches . . . One change I made in 2012 was to add the "widget" on the right with "popular posts" that drives traffic to those pages from any blog entry that someone comes upon from searching. The Soviet time trial blog entry is by far the most viewed because (apparently) it attracts interest from visitors who came to look at something else but I also see it as a search target (see below).

Highest number of fixed search arguments that brought in users

Of course there are many variants that I see of these search arguments. ("Bicycle patents" or "old bike patents" and so on and not just "bike patents.") 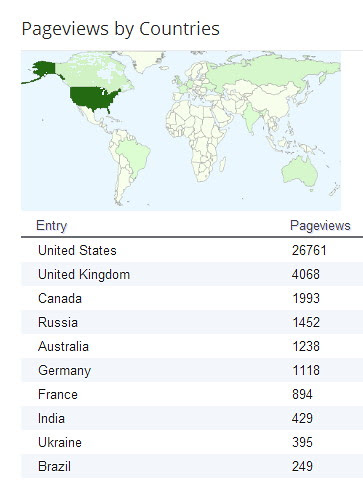 Mostly North American users but a fair number from elsewhere
Posted by michael neubert at 11:16 AM

Email ThisBlogThis!Share to TwitterShare to FacebookShare to Pinterest
Labels: blogging