There was a rather indefinite forecast that there might be snow this afternoon - so I rode this rather heavy old bike with studded mountain bike tires that are about two inches in diameter. If there is ice and snow, they are good to have, but this morning it was mostly clear, so the bike felt like a burden. However a couple of years ago I fell during a snow storm ride so I am trying to be more cautious.

Coming home I was glad to have this bike with its studded tires. The icy spots visible this morning were now covered in snow so it was harder to avoid them but with these tires it isn't necessary. I trundled along at a steady if slow pace. The most annoying aspect was the strong wind from the SW (or thereabouts) along the river.

Just on the DC side of the 14th St Bridge there was a rider in his sorta winter racing/training kit on a Cervélo who let me go ahead of him. Really, a Cervélo in the snow? So this will be the one time I completely drop a character on a bike like that. And while riding a heavy crap-cycle - that uh happens to have the right tires. So maybe not so crappy. 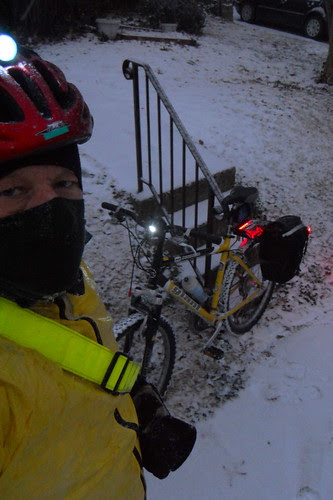 Made it home! Let the weekend begin ~
Posted by michael neubert at 6:51 PM