The Urban Biking Handbook: The DIY Guide to Building, Rebuilding, Tinkering with, and Repairing Your Bicycle for City Living by Charles Haine

"Urban biker" can be considered to be like "cycling hipster," thus the intended audience for this book are younger urban types who would be interested in getting in this growing kind of cycling. (Perhaps it isn't growing - that's just my assumption.) 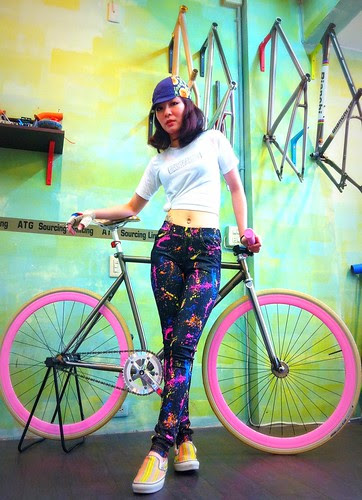 The lengthy sub-title of this book is "the DIY guide to building, rebuilding, tinkering with, and repairing your bicycle for city living." As is often the case with comprehensive guides that are only several hundred pages (and which have lots of photos) this is more like "here are some issues to know about and some reading to start with" to give a flavor of all the what's what, then you can go to the Internet and search for more detailed information as may be needed (or talk to a cycling friend). A book that spends one quarter of its length simply introducing the basic parts of a bicycle obviously isn't going to have much detail on "building, rebuilding and tinkering with" a bike - only a few problems are presented fairly clearly and fully. Many bicycle owners would end up in a "but my bike isn't like that" situation. There is quite a bit of detail on fixie conversion, including a table for teeth in the cog and the ring to achieve a particular gear ratio, but this is the sort of thing where I'm doubtful anyone would be relying on this book alone - but it can't hurt.

Unlike Urban Bikers' Tricks & Tips that I read recently, this presents a much more sensible approach towards motorist-cyclist relations and doesn't advocate idiotic behavior - this book recommends, "know the law, and follow it" and says, "your first job as a cyclist is to keep yourself alive and do no harm to the image of cyclists." Good! (Bizarrely my local public library in Arlington Va has eight copies of the hideous "Urban Bikers' Tricks & Tips" and only three copies of this title. But at Amazon.com, you can get the first title for five bucks new and the good one costs three times as much, all of $15. You get what you pay for?)


The "Tricks & Tips" book reminds me of this video - at about 5:40 in the video there are examples labeled "never do this," some of which are recommended in the book!

Anyway - back to the book Urban Biking Handbook - it has a lot of color photography - some is to provide flavor (of urban cycling) but most of the photographs are to illustrate something in the text. Some of the examples aren't ones I would choose and somehow the photo of a caliper brake is labeled as center pull brake and on the previous page one finds a photo of a center pull brake that is labeled caliper brake - but both photos are too close in to properly show the differences well in any event. So while the photography is pretty, it isn't always as helpful as one might hope.

View my list of cycling books and reviews
Posted by michael neubert at 8:20 PM