Before the winter was "scheduled" to start (which never appeared here in Arlington VA) I switched my tires on my "bad weather" bike. Because of the mild not-very-winterish weather and because of some trouble with my steel road bike, I ended up riding my carbon fiber Scattante commuting more than I would have expected. I did spend a lot of time cringing, because there seemed to be considerable amounts of broken glass lately on the trails, but I think I only had one flat on this bike - actually, I don't think I had any on this bike at all, but that can't be possible, can it?

As spring has sprung, I was eyeballing the Scattante's tires after another week riding it every day and observed that the front tire, while having plenty of rubber, looked like a grit magnet - see below. Small bits of stuff that have stuck to the tire over time have opened up small holes but perhaps more worrisome, the tire surface has a grainy aspect (not so visible in the photo) that doesn't look the way one would want a bike tire to look. 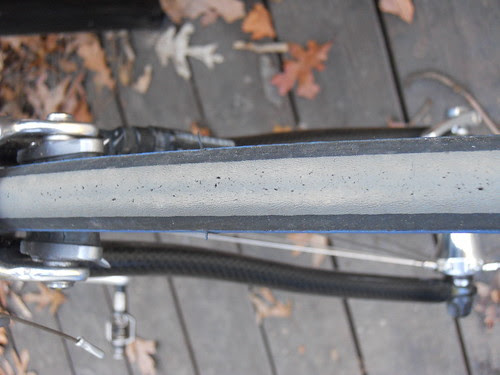 Anyway - this is the front tire. When I last switched tires on this bike, I decided to have one manufacturer's tire on the front and a completely different tire on the back. Michelin road tires, when new, are very rounded, so that without a rider, the bike sits up on a very narrow strip of tire. Of course, with a rider, this flattens out - still, in my mind this seems good for lowering so-called "rolling resistance." However these Michelin tires, when mounted on the rear, wear out that raised area at a terrific rate, so that rotating front-to-back (and back-to-front) just means that much of the time you have at least one tire if not two with significant center-line wear.

So I was at Performance Bike and I saw these Vredestein Fortezza SE tires for thirty dollars. As a road tire, these were a but odd looking compared to the Michelins I have used - a very flat surface meets road, even new, even without a rider. In my idiosyncratic thinking, it seems reasonable for the rear tire to be flat(er) since it is providing the traction to push the bike (and rider) down the road. And after a not while, based on my experience, it will be flat anyway, so why not just start that way? So I bought a couple of these tires and put one on the back the same time as a new Michelin Pro-Race 3 on the front. 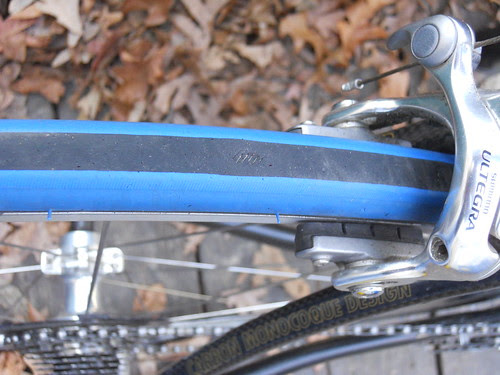 Vredestein Fortezza SE after a couple of thousand miles on rear

I guess Vredestein makes serious road tires, but this "Fortezza SE" model is something that is peculiar to Performance, near as I can tell. That isn't necessarily bad - and after all, my Scattante is a Performance Bike house brand bike, although none (zero) of the group are Performance house brand stuff, just the frame. But I thought I might get only so-so results. In fact, I figured I would end up replacing the Fortezza on the rear relatively quickly, but instead I have decided to replace both the front and the back tires at the same time. Mostly the Fortezza looks better than the Michelin on the front - it certainly doesn't have all those holes. Whatever it is made of sheds grit more consistently. But there is this one spot (visible in photo), and another smaller one (not in photo), where the rubber has worn through so you can see the material below. Uh-oh! And checking with a caliper, about 1/3 or more of the material in the center area of the tire is worn off generally. So it's time to change this tire, but I have gotten pretty good results from it, I think. 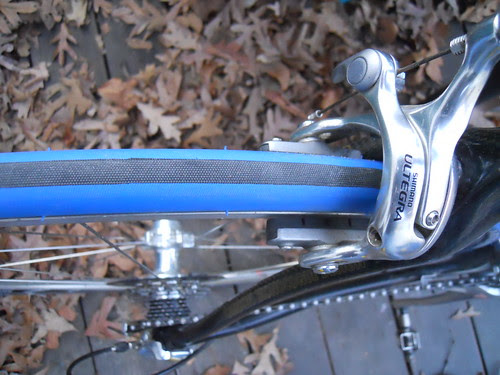 The new Vredestein Fortezza SE mounted on the rear

The Vredestein, for whatever reason, has a somewhat pebbly pattern when new down the middle and some fine angled tread-like lines in the blue area just next to the rubber in the center - this helps give some sense of tire wear but contributes nothing to traction (I assume) but isn't enough to slow things down, either.

1890s bike tires were mostly smooth, and in those days the early tires with any tread used that as a marketing feature.

Part of a VIM tire ad from 1897, praising the "pebbled tread"

Of course, the VIM tire people were very big on clever marketing - they were the ones who built the giant tricycle that required nine "riders" to operate it as a way to push their product.
Posted by michael neubert at 8:34 AM