Americans & Narrow Tires in the 1890s

It is not so easy to come up with certain kinds of historical information about cycling, but mass digitization of many out-of-copyright books has certainly offered up material to plow through looking. 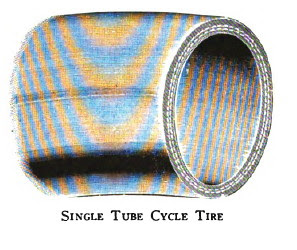 The basic (really basic) view of the single-tube tire, popular in America

In reading Peddling Bicycles to America recently I came to understand that most Americans in the 1890s and into the 20th century used "single tube tires" but I really didn't understand much about them - But I then found Pneumatic tires, automobile, truck, airplane, motorcycle, bicycle: an encyclopedia of tire manufacture, history, processes, machinery, modern repair and rebuilding, patents, etc., etc. ... in Google books, by Henry Clemens Pearson, published by the India Rubber Publishing Co. in 1922. While it talks a great deal about car, truck, and other tires, it also has a section about bicycle tires.

It starts with this introduction:


History Of The Bicycle Tire

The history of bicycle tires has not been studied as carefully as it deserves, because the majority is not so much interested in historical development as in actual results. Inventors and a few who are students by nature may be interested, but they generally prefer to read their history at first hand, which is in the patent office reports.

Ah yes, actual results. After some discussion of this and that, it continues:


The Single-tube Tire In America

. . . Nevertheless, it was not the Morgan & Wright tire, built by tire specialists, but the Hartford tire [a single-tube tire], built by a bicycle manufacturing company, that ultimately triumphed in America. The reason for this lies partly in the love of Americans for fast riding and partly in their mechanical aptitude and ability to handle tools. While the Europeans were riding 2-inch double tubes, held on by wires in France, and by beaded edges in Germany, and by both methods in England, the tendency in the United States was wholly toward single tubes of even smaller diameters, it having been found that a small single tube, pumped hard, is the fastest of all for road use. The Tillinghast Tire Association, which controlled the manufacture of all single tubes, finally produced an article which represented the high-water mark in bicycle tire making, in resilience, cheapness, beauty and speed. For anybody with deft fingers, it was also the easiest of all to repair, and this fact appealed strongly to the American.

So, the theory that thinner tires inflated to a higher pressure will encourage going faster - lower rolling resistance - than fatter tires inflated less goes all the way back to the 1890s. (Of course this says nothing about the accuracy of the theory, just that it is of long standing.) 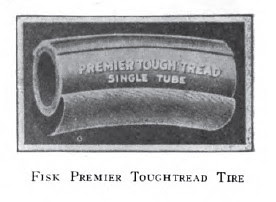 Above, a single-tube tire, mounted on a rim - no clinching!

Then there are more somewhat complex ruminations about the European use of something other than single-tube tires . . . mostly included here for the slightly amusing categorization of the mechanical aptitude of various nationalities.


Though American single tubes invaded Europe and found hosts of friends, on account of their many virtues, the question of their repair could never be mastered by either the British or the Continentals. Could the Tillinghast Association have set up repair shops at convenient places throughout Europe, single tubes might have swept the world as they did America. Even despite hostile tariffs, they were sold in Europe cheaper than the home made kind. There were only 200 single-tube tires made in United States in 1891, while 1,250,000 were sold in 1896. In England the single tube was cultivated during the early years, the Avon Rubber Company being most successful; then, too, the W. &. A. Bates Company was using plugs for its tires in 1892; so that the repair of single tubes by the regulation method has been known in England as long as in America. The British are tolerably quick with tools, and the reason that the double-tube tire survived in the United Kingdom is probably to be found in the prevalence of hedge thorns on the English roads. These hedge thorn pricks are easily stopped with the thick repair fluids which were later developed here in America; and had the English known of this method early in the day, the single tube might have had a different history there. There are no hedges in France, and the avowed reason of the failure of the single tube there was the inability of the French to repair it. Another reason was probably due to the great influence of the Dunlop company there, no less than to the great growth of the Michelins. Even to this day, the wired-on tire is the dominant type in France. 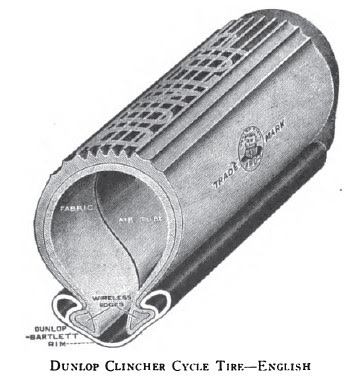 The book then includes, apparently for amusement, a photograph of the largest tricycle in the world (and its tires) described in an earlier post - this photo is different than the one I used that came from a magazine of 1897. 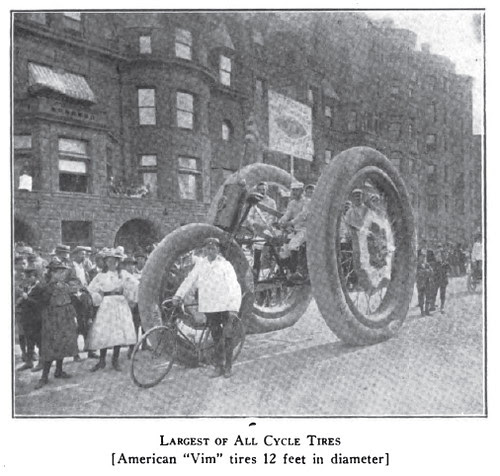 It is of course difficult for the non-specialist (that is, me) to be sure I am understanding what is suggested by all this, but it is still entertaining on some level. The more things stay the same, the more things . . . stay the same. Or so it seems reading this.
Posted by michael neubert at 7:20 PM