For much of cycling history, a simple nut was fine for most bikes to keep the wheels on

One of the things I most appreciate about bicycles is that the basic design of the "safety bicycle" developed in the 1890s is highly efficient and has come down to today as what most people recognize as your basic bicycle. Of course, in 100-years there have been some nominal improvements, some good and some not so good. The ones that are often not so good are those that are the most significant departure from basic simplicity and elegance of design.

Which brings me to "lawyer lips," cams, and skewers. You need some kind of fastener to hold the wheel's axle to the bicycle in the "dropouts" that are a metal slot for the axle to fit into (and to "drop out" of when not tightened). For many years, as shown above, the simple design was a threaded end to the axle, a washer, and a nut that could be tightened. 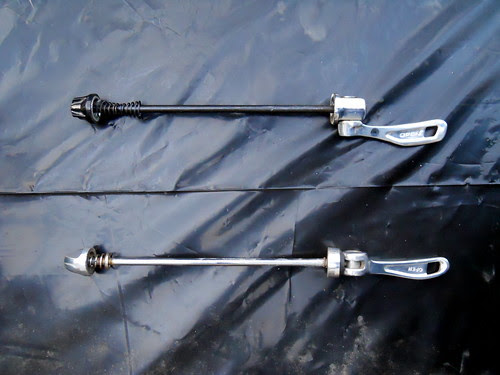 The problem with this, of course, is that it required carrying a tool to loosen the nut to take the wheel of to make repairs. So the "quick release" skewer was invented. Sheldon Brown has gone to the trouble to describe the two types of skewers in detail, so I will try not to duplicate his efforts, but suffice to say that the first version, the "enclosed cam" skewer (the upper one in the photo above), is considered to be superior in holding power to the "exposed cam" skewer, a later design believed to be cheaper to produce but marketed as being lighter in weight, thus ringing the bell of cyclists for whom lighter is always better. 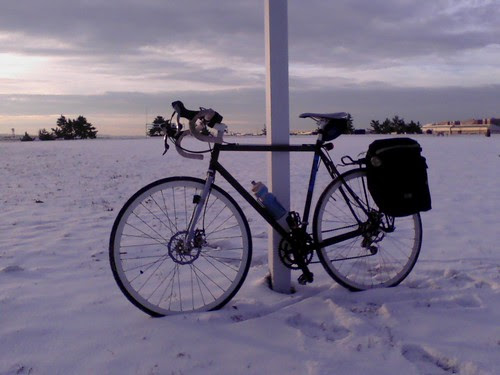 A few years ago, while forgetting that simple design is generally better, I decided that this Traitor Ruben would be a wonderful replacement for my long-serving REI heavy steel commuter bike for riding in bad weather. And the Avid BB-7 disk brakes do provide excellent stopping mostly (except when they don't, but that's a separate blog post) in rainy weather, which is nice. So I bought the thing. 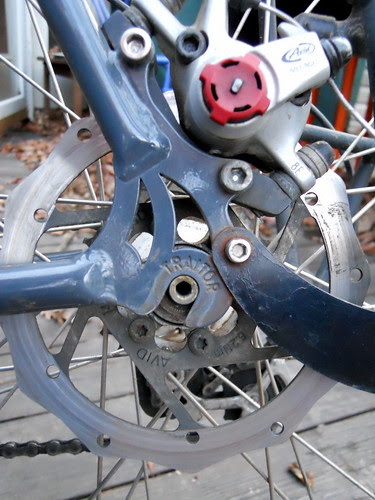 One could argue this does not look like "simple design" - anyway, as shown the skewer is removed showing the dropout more clearly

So now we get to "lawyer lips" - as it turns out, Wikipedia even has an article on "lawyer lips", explaining that they are "tabs fitted to the fork ends on the front fork of bicycles . . . to prevent a wheel from leaving the fork if the quick release skewer comes undone." Sheldon Brown also has an entry in his glossary about "lawyer lips" that is useful for background. The "lawyer" part is that if the fork has such lips, then you probably aren't going to be able to sue the manufacturer when you have an accident after a wheel falls off, because the manufacturer can show they did everything possible to prevent that happening even when the skewer is loose. 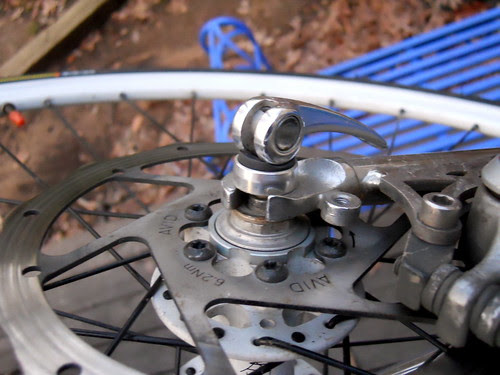 The Traitor Ruben front fork has one "lawyer lip" - enough, I guess

Unfortunately however the disk brake on the back introduces another wrinkle. The disk brake, when applied, generates considerable torque that tries to stop the bike, but also given the way the dropout is oriented on this thing, to yank the wheel out of the dropouts. About a year ago I had this happen and I thought the problem was that a bike shop had not tightened the skewer properly. The other day it happened again and I did a little reading (thanks Internet!) and realized this is more likely a design problem. The dropout is oriented poorly, exacerbating the problem (I think), plus they could have lawyer lips for the back dropout (although that is apparently not much done, if at all) and finally they used the crummy skewers.

There isn't much I can do about the dropout orientation or the lack of lips, but I have replaced the skewer with an enclosed cam skewer. So, safe to ride? 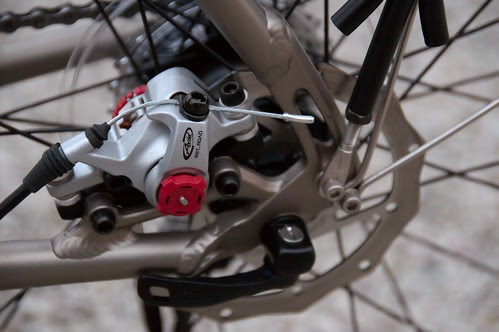 The brake should have been put on the lower chain stay, and not the seat stay, so the torque would automatically seat the axle in the dropouts, even with a loose skewer

I now think of this bike as my "purchase in haste, repair at leisure" bike. Live and learn. . .
Posted by michael neubert at 7:23 AM