Cyclist vs Man on Horse

As sometimes happens, while searching for something I saw in passing earlier in the Library of Congress Prints & Photographs Online Catalog I am unable to find what I had in mind but instead find something else.

From time to time one reads about "bike vs horse" races - this French poster advertises such a race between Samuel Franklin Cody (who took Wild Bill Cody's surname but was not related, it seems) and a French bicycle racer in 1893. This Cody was quite a character - at any rate, Wikipedia notes that, "While touring Europe in the mid-1890s, Cody capitalized on the bicycle craze by staging a series of horse vs. bicycle races against famous cyclists. Cycling organizations quickly frowned on this practice, which drew accusations of fixed results." So he moved on to other types of spectacles (that didn't involve bicycles). For some reason it was scanned in two parts. Also, the images were skewed so I straightened them (more or less) and cropped the targets out. 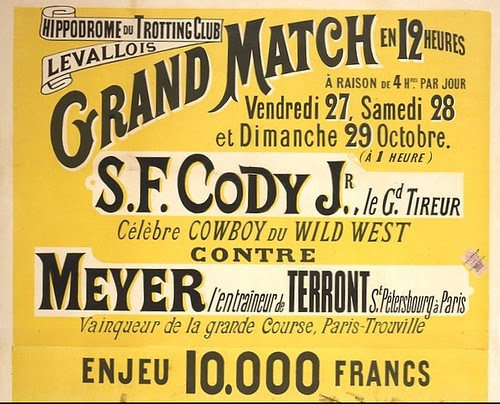 The top of the poster

Apparently this tradition continues - as recently as August of last year, Thomas Voeckler (who had placed fourth in the Tour de France) raced a trotter (a horse pulling a rider on a sulky) in three heats, losing two of them. According to a French source, "duels between professional cyclists and horses are not rare and generally turn to the advantage of the quadrupeds." Maybe in France . . .
Posted by michael neubert at 6:52 PM