Bicycle Sheet Music From the 1890s

The Music Division folks at the Library of Congress have a blog with a new blog post about an 1895 musical composition (sheet music) called "The Bloomer March." 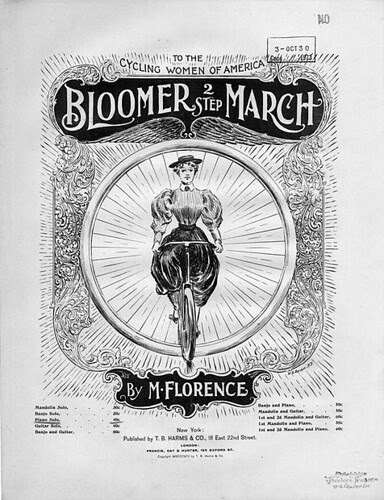 "To the Cycling Women of America" from one M. Florence in 1895

As is often the case for someone who can't read music and hum the tune, the cover art is more interesting than the music. So while this two-step march may evoke the spirit of women riding in bloomers, it has no words. Trying to locate other songs in the collection that are cycling-related is difficult because the records do not have subject headings connected to what the songs are about, leaving only keyword searching of the titles. (The words of those with lyrics are also not searchable.)

But a simple search of "bicycle" did turn up another song, The Bicycle Race", from the same year - and it turns out to focus also on women in bloomers. This time there is no cover art, but there are lyrics. 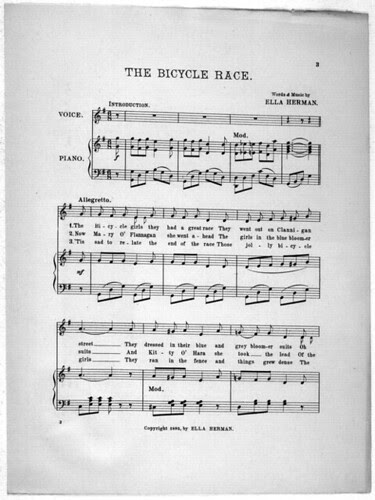 Some of the lyrics:

The song does not have a happy outcome:

This is the only song online available from the woman who wrote the music and lyrics, Ella Herman (and who also published it).

Trying to think of a modern song related to cycling reveals mostly that I am not familiar with modern songs, because the song that eventually comes to mind is 35 years old.

OK, here is a song only a year old that is not only about bicycles, but bicycle commuting! Good . . .
Posted by michael neubert at 8:49 AM