Yet Another Alternative Drive System for Bikes (1896)

While the drive system was a bust, he did have a good idea with his spring-suspension. 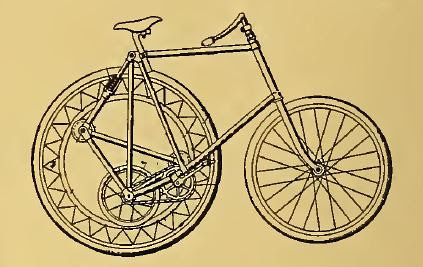 From Cycling Life, September 10, 1896. Another invention announced that the inventor hopes will supplement the reliable basic chain system.

The bicycle shown herewith is the invention of John W. Mclntire, of Chicago. The principal object of the inventor is to provide a driving mechanism by which greatly increased speed may be obtained. The rear wheel is constructed with an open center and in reality constitutes a circular track upon which the driving friction-wheel of the machine rests and runs. The track-wheel comprises an outer rim of crescent shape, in which is arranged either a solid, cushion or pneumatic tire, and also an inner rim concentric to the outer rim and connected thereto by spokes. The inner rim of the track-wheel is U-shaped in cross section, comprising a flat horizontal bearing surface and a pair of flanges. These flanges receive the ends of the spokes. The rim of the driving-wheel is composed of two metal rings. Each ring is formed with a flange, by means of which the rings are united to form a rim, the flanges being perforated to receive the spokes. The two rims slide and adjust themselves relatively to each other, thus compensating for inequalities in the surface traveled over and keeping the driving-wheel in constant engagement with the track-wheel. In order to guide the track-wheel and hold it against wabbling [sic] a triangular frame is connected to the main frame of the machine. In this frame are two guide-wheels, each provided with oppositely disposed flanges. These wheels run freely against the inner surface of the wheel-rim and support the track wheel against lateral movement. A brace is interposed between the rear end of the upper main horizontal bar of the frame and the rear corner of the supplemental frame. This brace is made in two sections and permits of-contraction [sic] and expansion by means of a spring. The spring serves to cushion the weight of the rider and prevents his weight tuning transferred to the supplemental frame in such manner as to cause the latter to bind against the inner rim.

The complexity of the drive system description suggests immediately the unlikeliness that this is a better solution than a simple chain connected to wheels with teeth to transfer power. On the other hand, Cycling Life had an oligation to the cycle trade to do this sort of publicity.

On the other hand, the spring "to cushion the weight of the rider" was not the main point of this invention (and perhaps not as unusual as it seems to me 100-plus years later) but is a feature in modern bikes.
Posted by michael neubert at 10:05 AM