So, some Seattlites from the century before the last one had this clever (?) idea. But is it rideable? I do not think I have seen anything quite along these lines, although certain recumbents have the same business of the handlebars coming from the rear. 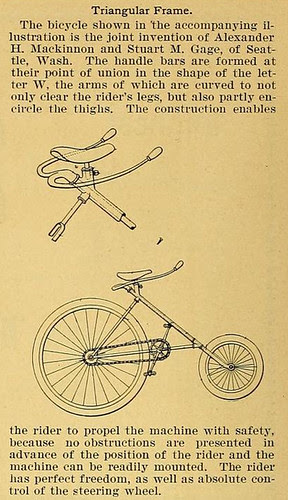 Really, can a bike with this extreme a head tube angle - it appears to be around 45 degrees - handle properly? One might also wonder about braking, but many bikes were supplied without brakes since this would not be a freehub, so you stop by slowing your peddling.

The construction enables the rider to propel the machine with safety, because no obstructions are presented in advance of the position of the rider and the machine can be readily mounted.

I wonder if the inventors supplied this mangled text or if writers at Cycling Life produced it. It borders on gibberish.
Posted by michael neubert at 1:19 PM