In addition to searching the texts (old books) at the Internet Archive or old books at the Hathitrust (that are in the public domain) one can look at old patent applications with Google's patent search tool. 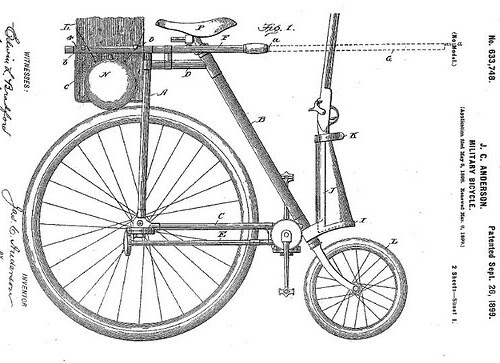 This is a odd undersized bike with gun for military use - in theory.
The full application is here. Oddly it is a "shaft drive" rather than using a chain. The handle bars pivot behind rather than in front of the rider, much like the triangle bike I wrote about earlier.

Some patents border on simple-minded, such as this parasol attachment/system. (The full application is here.)

Searching for "bicycle pedals" reveals that toe clips were already developed in the 1890s. Perhaps most entertaining is searching for "bicycle brake" which reveals many less than optimal approaches that nonetheless had proponents. Some attempt to improve the simple and widely employed "press something against the rubber front tire from above" model (such as this example) others tried to act to slow the chain (such as this one).
Posted by michael neubert at 6:08 PM