Washington Post story on growing popularity of cycling in D.C.

Article is about both the success of Capital Bikeshare and the unexpected (apparently) growth of cycling as a way to get around fashionably in the district.

. . . officials say they are stunned by the immediate popularity of Capital Bikeshare, a network of 1,100 communal red bicycles scattered around the District and Arlington County for residents and tourists. 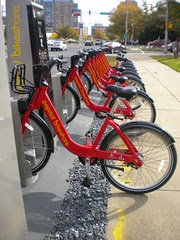 I have certainly seen more and more people using these cycles, some in the morning in places that indicate they are using as part of their commute.

But generally there is room for improvement . . .

Andy D. Clarke, president of the Washington-based League of American Bicyclists, said the District still has a long way to go to catch up to Boulder, Colo., San Francisco, Portland, Ore., and other West Coast cities that promote bicycling.

But Clarke said the District and New York have moved into the "top tier" for short-term gains in launching cycling-related initiatives.

Posted by michael neubert at 10:50 AM