My impulse buy bike, a Traitor Ruben steel sort-of cyclocross sort-of urban something-or-other bike had pretty good components but the wheels were no-name (other than the name of the company, Traitor) and the spokes were these black-coated anonymous things, 32 per wheel.

Anyway, a few months ago they started popping at the nipple end on the rear wheel. First one - replace it, then another - replace it. Now after the third has blown I have given up on one-at-a-time and am having the black crap spokes cut off and having the wheel rebuilt with new DT Swiss spokes. 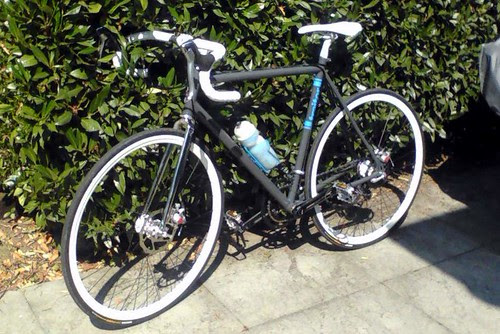 A drive (ok, rear) wheel of a road bike with disk brakes has to work really hard, so the spokes need to be something other than junk selected to make the bike look "cool." (Assuming someone is going to ride the bike and not just admire it.) 2,000 miles or so isn't that long for the wheel to go through, so it is poor performance for the spokes to fail already. (No, I don't wait 220 pounds or carry panniers full of bricks.)

Well, there you have it. When evaluating a bike to buy, the wheels and the spokes should meet the same quality assessment as the derailleur (let's say). A 105 or Ultegra derailleur doesn't make up for crummy spokes.