Alternatives to the "Traditional" Chain

Almost all bikes today have chains that are remarkably similar to each other and to chains of 100 years ago. All chains have pins that are 1/2 inch (and not some metric distance) apart - this means that it is fairly easy to check if a chain is "stretched" without special tools. (It isn't really that the chain stretches so much as that the pins bend, resulting in a longer chain.) Simply matching up a ruler to a straight length of the chain for 12 inches will show whether the chain is longer than it should be or not. If the chain is stretched more than a few percent longer than it won't match up with the teeth on the cogs and rings and can ruin them - and chains are cheaper than cogs and rings. If you let it go long enough, chains can break - I once saw a fellow break a chain while crossing 14th St on Independence in DC. Rather an abrupt stop.

I'm told that at some time in the 1990s Shimano introduced a chain with one centimeter between pins - the resulting links were closer together and of course the cogs and rings had to be with teeth that were also closer together. Like many "innovations" that represent a pointless departure from traditional approaches, it didn't catch on.

An idea that is presented as new but is actually from the 1890s is to replace the chain and rings with a drive shaft - in other words, before there were cars with drive shafts, there were bicycles with them. Wikipedia's article on bicycle chains notes that a bicycle chain is more than 98 percent efficient in transmitting power, so the big problem with other systems has been that they are usually less efficient.

This 1900 catalog has a shaft drive bike listed first:
Columbia and Hartford Catalog, 1900

The superiority of bevel gears for power transmission in the bicycle has become established beyond question.

Actually this is clearly not true, but the next statement about how well the shaft drive lasts (29,000 miles!) compared to a chain of those days was probably a strong favorable consideration.

At 65 dollars, the shaft drive bike is the most expensive model that this company was selling at the time. Presumably the big plus was that the shaft drive was cleaner than a chain, and for women didn't require netting over the rear wheel and chain guards to keep skirts out of the chain system. One suspects the absence of systems to demonstrate the lesser efficiency may have also contributed to a continuing interest in chain drives. Note that the drive shaft took on the role of the right side chain stay in the bike's structure.

For whatever reason, some early bicycle manufacturers pushed shaft drive bicycles for some time. They were even used by cycle racers - the African American rider Major Taylor rode shaft drive bikes in races, for example. But eventually they fell out of favor - for one thing, they were always more expensive than the comparable model with a chain. Also, removal of a rear wheel to work on a flat tire appears to be more complicated on a bike with a chain drive.

Notwithstanding all that, there have been attempts in recent years to introduce bikes with shaft drives, generally on bikes where the perceived lower maintenance and cleaner aspect of a shaft drive would be attractive, usually paired with an internal hub shift system. 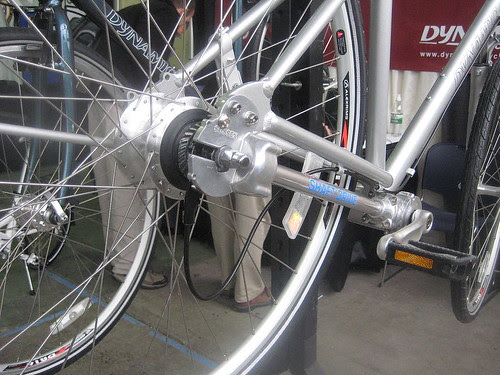 In this modern example, there is a chain stay and the drive shift.

Another, probably more sensible approach is to use a drive belt to replace the chain. The belt is based on timing "chain" (or belt) technology developed for cars and these belts are incredibly strong - and require no grease or lubrication, so they stay clean. Ixi Bikes makes a small easy-to-disassemble (but not folding) bike with a belt. Trek makes several different full size bikes with belt drives, such as the District single speed, below. The belt drive seems to be pricey compared to a chain but is almost certainly just as efficient. 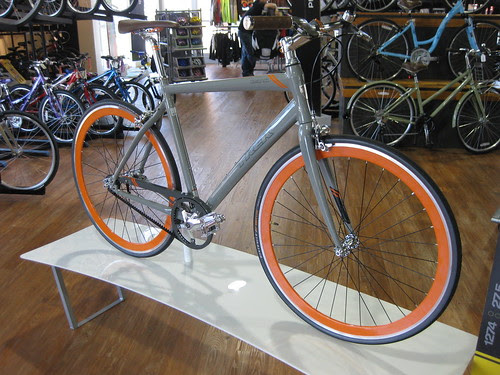 Posted by michael neubert at 5:39 PM