An ad in Cycling Life for a tandem bike with a somewhat unusual design by today's standards, anyway. 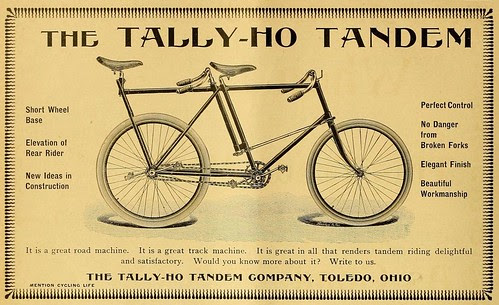 This rather simple design adds a new triangle with seat behind the seat post for the (now) front rider, with the rear rider somewhat aft of the rear wheel. The distribution of weight to the rear wheel would be severe - could this handle at all well? Presumably this would be unrideable without someone on the front seat. And the wear on the rear wheel's spokes and tire would seem likely to create problems. Particularly unusual is the chain that connects the rear rider's handlebars to the front rider's, so either (or both) can steer.

Another version of this cycle was a step through model for the front (woman) rider, a "courting tandem." The man in the rear could pedal and steer his sweetheart who rides in front. Thus having the rear seat slightly higher was a "feature" since the rear rider could then see over the front rider's head to do steering while seeing where they were going.

Another blog entry describing this type of tandem with more photos and includes a modern-day attempt at one - the modern version was intended to take advantage of possible advantages as a tandem track bike (I think). The rear wheel on the modern version looks like a lot of effort went into being it extremely strong.

Above, a model with a similar approach to the back rider, from a different company. Not sure what the need for a six seater bike was in the 1890s - there were certainly three and four seat pace bikes that racers would draft behind to set records, but six seats?? Without riders the bike weighed 124 pounds . . .
Posted by michael neubert at 9:26 PM