For some years I used "traditional" Shimano SPD pedals and shoe cleats. I did not spend a lot of money on the pedals and had some "interesting" (unpleasant) failures - I never developed a good understanding of how to adjust or maintain them. When I bought a new road bike in 2007 I bought "road" Eggbeater pedals made by Crank Bros as well as a set of mountain bike Eggbeater pedals for my bad weather bike. The later set are now on my Traitor Ruben commuter bike (see below). Three years old and something like 6,000 or so miles on the pedals (not the bike) there was some play in one of them. I had used a small grease gun and lubed the pedals from time to time, but things do wear out. 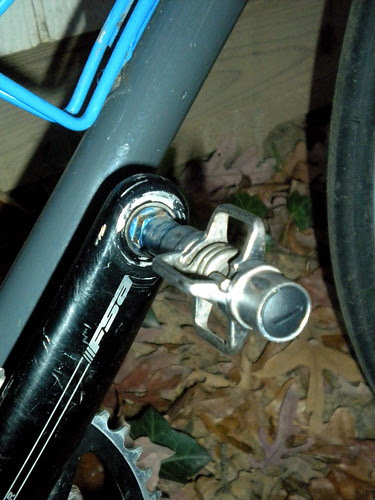 Each pedal has two "bearings" - one to the inside and one to the outside. For this not terribly expensive pedal, the inboard "bearing" isn't a bearing at all but a plastic bushing (sleeve) that is greased. The outboard bearing is a true cartridge bearing (ball bearings in two rings that keep them under easy control). Seems kind of amazing to me that they lasted this long, particularly since Crank Bros advised rebuilding every year!!!

I ordered a rebuild kit - basically, other than the pedal and the spindle, all the other parts get replaced - new bearings, new seal, new bolt to hold the pedal on to the spindle. The tedious part is cleaning off all the old grease and the plastic bushings didn't want to come out, but eventually all worked out.

Of course the outside of the pedals still look beat up, but then they are - but also pretty indestructable.

Separately I had the rear wheel of my Traitor Ruben rebuilt with DT Swiss spokes - the original spokes started popping after less than 2,000 miles, and when the third one went, I had the wheel rebuilt before the rim was ruined. No more black coated spokes on the rear wheel (which is how it came).

Since the bike has (mechanical) disk brakes front and back, one reason that the rear wheel was stressed was the extra load of braking near the hub with a disk brake that is transmitted out to the rim through the spokes. It would be great to have a disk brake on the front wheel and a cantilever brake on the rear wheel to reduce that stress - it would also be simpler than trying to adjust the rear desk if you have a rack attached to the bike since the rack complicates access to the desk brake. 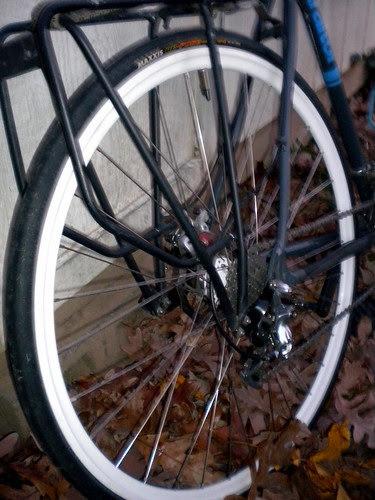 Posted by michael neubert at 4:55 PM