Two Books from 1890s - Travel by Cycle in Europe

Cycling in Europe was published in 1899 and is available online here.

The title is reasonable:
CYCLING IN EUROPE.

But the sub-title is rather long:
AN ILLUSTRATED HAND-BOOK OF INFORMATION FOR THE USE OF TOURING CYCLISTS, CONTAINING ALSO HINTS FOR PREPARATION, SUGGESTIONS CONCERNING BAGGAGE, EXPENSES, ROUTES, HOTELS, ETC., ETC., AND A LIST OF FAMOUS CYCLING TOURS IN ENGLAND, IRELAND, FRANCE, SWITZERLAND, GERMANY AND HOLLAND, GIVING EACH DAY'S STOPPING PLACE, AND NOTES OF ATTRACTIVE FEATURES ALONG THE ROUTE. 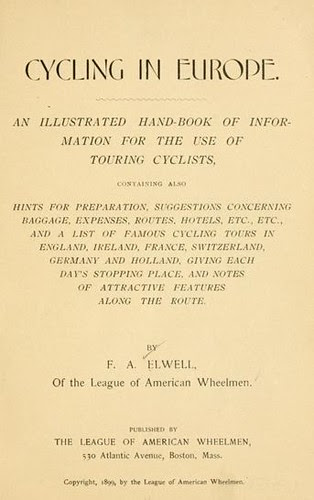 The book reminds me of Rick Steves of today - while he writes advice books on travel, he also organizes and leads tours himself. 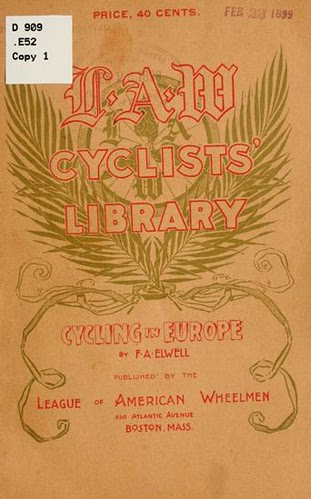 68 pages of advice of various kinds - all for only forty cents.

Most of the photographs seem to be stock photos but there is one that does have bicycles in it, of France ~ 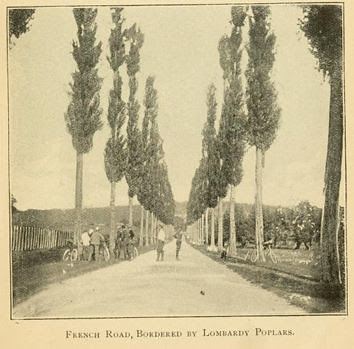 Some of the advice is fairly general travel advice; for example, about passports:

Unless you are going to Russia or Turkey, you will not be obliged to show a passport on entering the country, and if you take one the chances are ten to one that you would not use it once, and yet I would advise that you take a passport, because you might need it, and if so you will be very thankful that you have it.

A second book on this topic published in 1898 is "Why Not Cycle Abroad Yourself?" is also available online.

The subtitle of this one is a little shorter - WHAT A BICYCLE TRIP IN EUROPE) COSTS, HOW TO TAKE IT, HOW TO ENJOY IT, WITH A NARRATIVE OF PERSONAL TOURS, ILLUSTRATIONS AND MAPS. It isn't clear from the title, but the book is intended specifically for women cyclists.

What would any sensible nineteenth century up-to-date young woman do nowadays if setting out on a journey beyond the night and across the day, to say nothing of going beyond the furthermost purple rim? Why, naturally she would get out her bicycle, read this little book which would tell her all she need to know, and start off throughout the world at an expense which would make her or anyone else think living in a Harlem flat dear by comparison, considering the returns achieved. 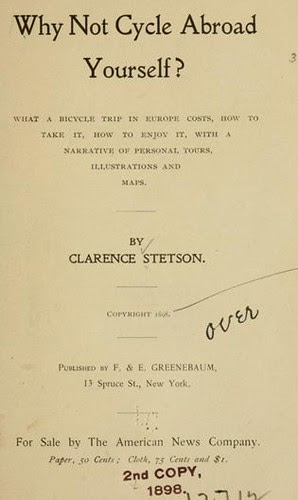 The tone is of helpful light amusement ~

As to the expense: Aside from the first cost of the ocean passage a European tour on a bicycle costs no more than, if as much as, an ordinary summer outing at home under the same conditions and of a like duration. The truth is that the cheapness of a wheeling tour in Europe is really remarkable — if one wishes to make it cheap and knows how. As to languages one has no need of an interpreter. Abroad, as elsewhere, money talks and is the best interpreter you can possibly have. However, this statement is made with limitation. I have no wish to disparage the worth of linguistic attainments, and no one is further from belittling the value of a knowledge of French, for instance, with a smattering of as many other languages thrown in as you can conveniently get into your hand bag. Still, one can go as far as to say that with a fair idea, in advance, of what things ought to cost, and with all the information which it is our object to have comprised in this little volume, one can travel throughout Europe on a bicycle without being subjected either to extortion or petty annoyances, and with perfect ease, comfort and safety. I make this statement, too, not from any theoretical point of view. It is based on actual experience in Italy, where, ordinarily, nothing is spoken except the language of the country. There I have often stopped at a cafe to enquire the way to the next town in my choicest Italian, and have been understood to say that I wanted a bottle of their best Chianti. Still, such an experience is so novel, and you and your friends get so much amusement out of it, that it becomes a pleasant incident of the trip. Besides, it really isn't a serious matter if you get to your destination perhaps a bit later than you expected. You may be sure that the extra time will not have been without pleasure and profit. 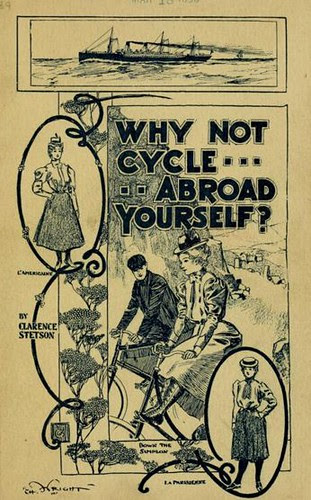 While entertaining enough to read now, as a book of practical advice at the time it would have been somewhat tedious since it combines narrative description of actual trips and randomly placed advice - trying to find answers to specific questions would not be easy. Apparently one was expected to read the entire 210 or so page.
Posted by michael neubert at 9:54 PM