Where Does "Content" About Early Cycling History Come From?

I sometimes blog about cycling history, particularly from the 1890s and early 1900s. 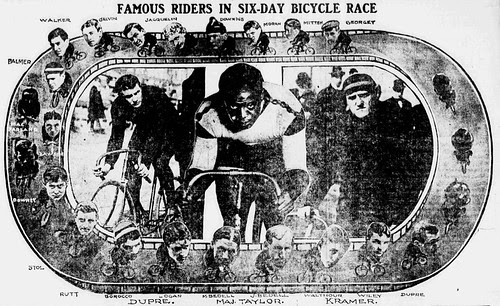 Montage image including Major Taylor (in the center) found in an online historic newspaper, an issue of The Daily World, from December 1908

How and where do I find photos and articles? As a librarian, I have some experience helping users find what they need, but I confess that with the amount of "content" that has been digitized in various formats, I can do most of my research sitting at home - although digging around can take some time.

Here are some of the places I look:

Library of Congress Prints & Photographs Online Catalog (PPOC): I have found many public domain photographs online in PPOC, such as the one below (that is one my favorites). 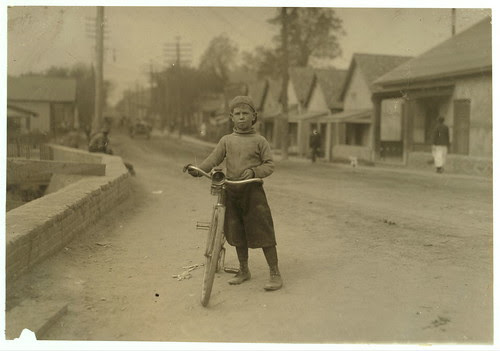 Bicycle messenger from 1913 Isaac Boyett, "I'm de whole show." The twelve year old proprietor, manager and messenger of the Club Messenger Service, 402 Austin Street, Waco. The photo shows him in the heart of the Red Light district where he was delivering messages as he does several times a day. Said he knows the houses and some of the inmates. Has been doing this for one year, working until 9:30 P.M. Saturdays. Not so late on other nights. Makes from six to ten dollars a week. Location: Waco, Texas

While most can be found searching simply on "bicycle" that is a subject term that has been assigned or appears in the item's title, alas this is not true for all. The record (that is the basis for searching) for the photograph below from the Library of Congress' Harris & Ewing collection does not have the word "bicycle" in it anywhere - I found it by looking at page after page of thumbnails of the collection to see if there were any bicycles hiding in the collection - and there were! 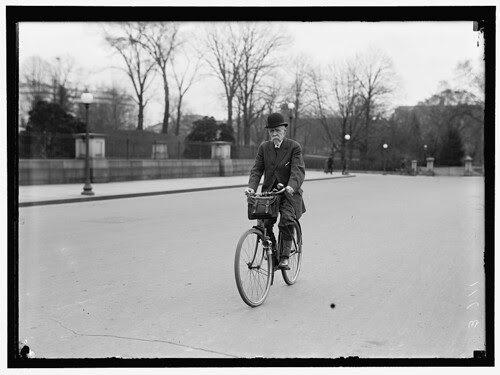 Photo of a senior State Dept Official commuting by bike, 1914

Full text and images of books and magazines: Many books and magazines about cycling that are in the public domain have been digitized, although not nearly enough (in my view). Good places to search are Google books, "Texts" (mostly books) in the Internet Archive, and Hathitrust, either their online catalog or the full text (of the materials) search.

The Hathitrust materials have the fullest records associated with them - a simple search on "bicycle" for items that have a "full view" (that is, are available fully online) brings up more than 160 items. Most are books published before 1923 (for which copyright has expired) but others are government documents or otherwise in the public domain, such as a 1974 book, "Bicycling for Everyone" where I found a nugget about cycling in the 1890s:

"The discovery and progressive improvement of the bicycle," editorialized the New York Tribune in 1895, "is of more importance to mankind than all the victories and defeats of Napoleon, with the First and Second Punic Wars . . . thrown in."

Most of the books that I have found I have then done screen captures of interesting illustrations and posted them in Flickr set that as of today has 172 "photos". (I put copies of PPOC photos here, too.) It is easy to embed images from Flickr in the blog. 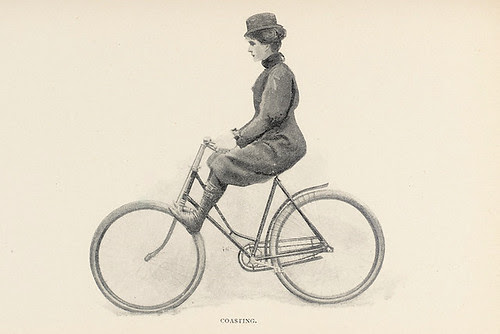 From "Bicycling for ladies with hints as to the art of wheeling, advice to beginners, dress, care of the bicycle, mechanics, training, exercise, etc., etc." by Maria E. Ward, published in 1896 - the photographs are by by Alice Austen who tried to create real action shots but with the technology of the time, used a posed approach for this and other photos in the book

Some books are located in other places and I root them out. For example, below is an image from a book digitized by the Library of Congress that isn't available through the systems mentioned above, 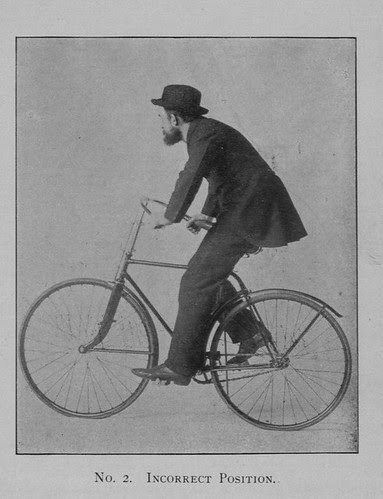 "The bicycle: its selection, riding, and care" by L.F. Korns, published in 1892 - a full PDF is available and a page-by-page view - the images in the page viewer are better

Public domain newspapers: The Library of Congress Chronicling America program has searchable newspapers published before 1923 from many (but not all) states. The image at the top of this post was found by searching on the bicycle racer Bobby Walthour's last name - the text of the newspapers has been OCR'ed with OK accuracy, but a lot of browsing of search results is required to find interesting stuff.

When I post these screen captures of public domain published materials that are fully available on the Internet, I include links to the full presentation on the original system as well as a link to other sized versions in my Flickr set. That way anyone reading my blog post can follow up with further reading/examination of the original book, or article, or whatever it was.

Since these items are in the public domain, anyone can reuse what I present without my permission, of course - and one other blogger that I know of has. A fellow in England blogs about this same period using the same sorts of resources that I do, and when he wanted some Christmas-y images last December for a blogpost he made use of an image from an issue of "Cycling Life" of Santa Claus that I had blogged about a year earlier. 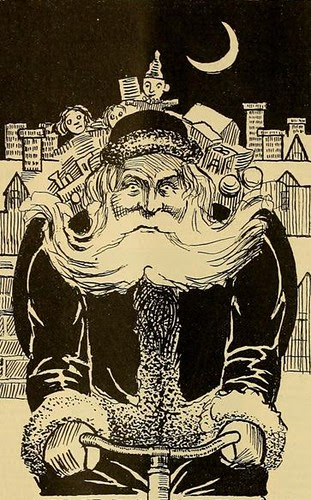 This image, lost for more than 100 years, has now appeared in two blogs

In this post he reused material I had presented in a more recent post, including my corrected and properly formatted version of the (ironic) poem, "The Introspective Scorcher." Again, all in the public domain, so available for the taking. (In fact, in my Scorcher post I reused some material from some of my own earlier posts . . .)

Of course if someone makes use (re-use?) of some public domain "content" that they found with my help, like any librarian, I am glad to be acknowledged.
Posted by michael neubert at 8:50 AM