In an earlier post, I looked at an article in the Scientific American from 1896 about a four-seat bicycle that carried a pump to fight fires - a cycle-borne fire engine, in Germany. 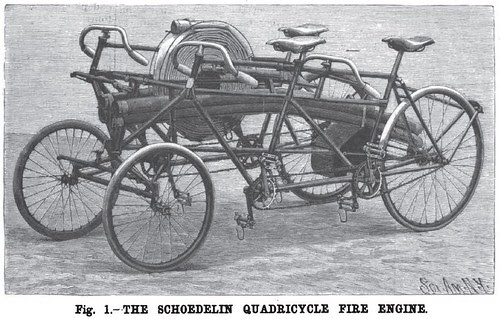 Looking for articles about six-day races at Madison Square Garden in the early 1900s, I bumped into an article in the New York "Sun" of 1910 titled, "Fire Fighters of Europe" that looked at the kind of equipment used and compared it to what was used in New York City. Five different photographs show unusual approaches, such as a boat-as-fire-engine in Venice, plus a photo showing the bicycle-fire engine in a small German town. 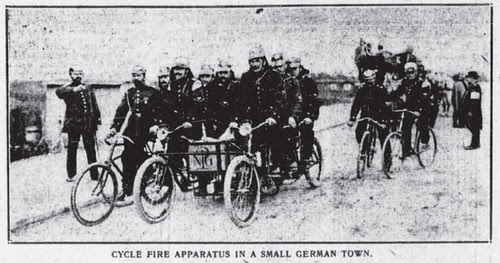 A photograph of a similar unusual bicycle

It is a little difficult to see the details in this image (which was produced from microfilm of the newspaper) but it appears that this cycle is not the same as the 1896 model - the pump unit seems to be near the front, and it looks like there are three riders on each side and not two, so this looks like a six-seat bicycle.

The article's author suggest that, "It is a swift and effective method, but is not likely to be imitated in this country."
Posted by michael neubert at 9:38 PM