Life in the Slipstream: The Legend of Bobby Walthour Sr. (Book Review)

Life in the Slipstream: The Legend of Bobby Walthour Sr. by Andrew M. Homan

I thought this was a very well executed and readable biography of Bobby Walthour Sr., who was an amazingly successful bicycle racer in the early 1900s. Considering that the research seems to have come almost entirely from newspaper and magazine articles, the level of detail is remarkable. The focus is on his racing but there is a fair amount about his life otherwise - more than one might expect from someone who kept no diary and didn't have correspondence to mine. 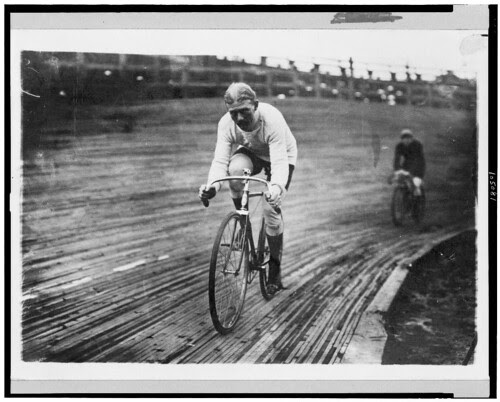 Bobby Walthour riding in 1909, from the Library of Congress

Walthour did two kinds of racing for the most part, both extremely well. He participated in six day races (that were two member team events - the riders didn't ride 24 hours a day) on an annual basis at Madison Square Garden and then he did paced racing behind motorcycles. the paced cycle races were incredible dangerous, performed on banked tracks with little enough space for both the riders on the bikes and the motorcycles they were closely following. From 1900 to 1910 more than a dozen of the best riders from around the world or the drivers of the pacing motorcycles died in accidents - despite being one of the busiest and most successful riders, Walthour survived. He did, however, accumulate a long list of broken bones and other injuries. An example of a cyclist racing behind a tandem motorpace motorcycle, from Australia - Walthour prefered riding behind smaller motorcycles with just a driver

Walthour earned for the time a phenomenal amount of money racing. The author supplies modern day equivalents for the dollar figures representing his income but it is more useful that he provides the context of what earnings were for different professions and various typical costs such as housing.

The sustained speeds achieved by cyclists who were being motor-paced could be quite incredible - more than fifty miles per hour for more than an hour. The description of the events in this book conveys the drama of the racing well. 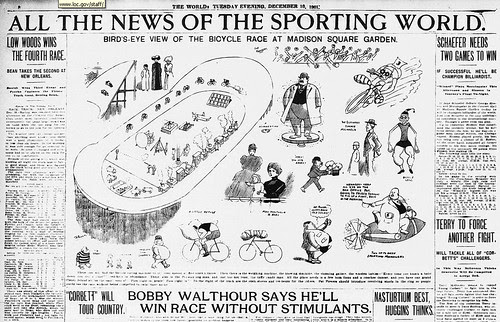 From "The World", December 1901, showing the Madison Square Garden for a six day race - click on photo to see details. In the Center is Walthour's wife, who famously attended such races with her children.

I gave this five stars but I'm a cycling enthusiast. I think this should appeal to a broader audience but probably not at the five-star level.

Walthour was from Atlanta, Georgia, and always returned home there, even after long stays in other areas (including several years in Germany) to be closer to lucrative racing opportunities. He is thought to be the first athlete to endorse Coca-Cola in an advertisement.

View all my cycling book references in Goodreads.
Posted by michael neubert at 9:14 PM