Starting a Search for Bikes in a Trove

A week or so ago I posted some information about some places I go to in order to find information about the history of cycling, including photographs, newspaper articles, and books in the public domain (that is, not under copyright).

Another good starting point for bicycle history research is "Trove", a search system from the National Library of Australia. Trove has several positive aspects for beginning research - one is that their search includes many types of collection materials, including photographs and manuscripts as well as books (and others). Also, for some of the materials, in particular photographs, they have "ingested" metadata for collections outside of the National Library of Australia and even outside of Australia. The metadata has to be available to them in an appropriate format so they can do this but as a "one-stop" starting place it's great. 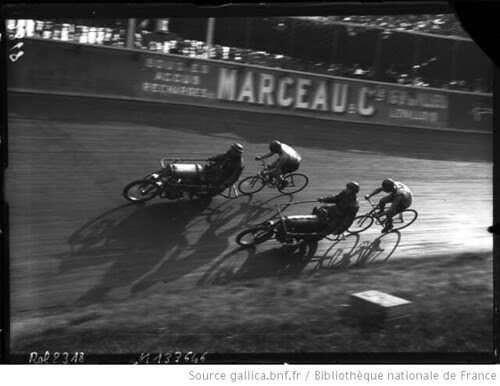 Bobby Walthour racing in France, a 1908 photograph found in "Trove" - Walthour is below on the track, just being passed

I recently read (and enjoyed) a biography about the famous American cycle racer Bobby Walthour (that I also reviewed). I wasn't terribly happy with the one photograph of Walthour I found at the Library of Congress. Searching for "Walthour" in Trove turns up photographs, newspaper articles, and books (and some stuff that isn't the right Walthour, but it isn't very much and I can ignore that). The newspaper search in Trove is one area where the search is limited to Australian "content" but unlike the U.S. Chronicling America, it extends to 1954 rather than 1923. It says something about Walthour's international racing reputation that there were articles in Australian newspapers about his racing achievements, mostly winning races in Europe in the early 1900s. His retirement from racing was also reported in Australia. (Arguably Walthour and Major Taylor set the stage for Lance Armstrong's achievements, but the gap of ninety or so years erased any popular awareness of them.)

There are 23 photos (now) in Trove with "my" Walthour, including several that are far more interesting than any I had found earlier. As it turns out, almost all the photos in Trove are from Gallica at the Bibliotheque nationale de France (BnF), part of a collection of press agency photographs, Agence Rol. Agence photographique. 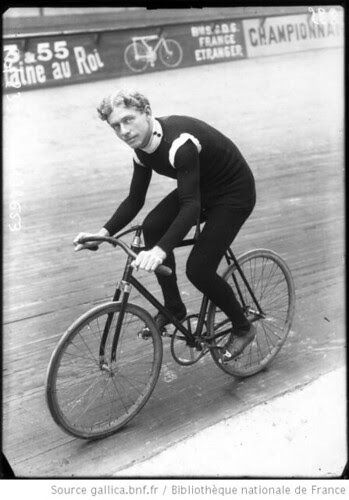 To display results from other institutions' collections, Trove transfers you to the other institution's website - so to see BnF materials you end up using Gallica. So having been led there by Trove, I turn my attention to Gallica. And as it turns out, when I search Gallica directly for "Walthour," I find some Walthour photographs that haven't reached Trove - six additional photos from Agence Meurisse. 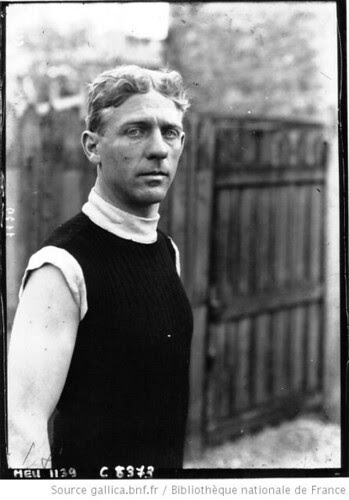 So while Trove is a good place to start a search, perhaps its greatest benefit is introducing you to other search systems that you can search further, such as Gallica. Each of these systems has its own pecularities - Gallica, for example, seems to offer only low resolution images as its "high res downloadable" versions, which while adequate for web display such as in this blog would be poor choices for any printed usage.

Sometimes one wants newer material. One good resource to keep in mind is the image search in Google for their Life magazine archive - a search for "bicycle" turns up a wide variety of items from the 20th century. I was surprised to find that six-day races were being run as late as 1948, as shown in this photograph. Apparently this image search retrieves using an exact match, so a search on "bicycle" doesn't find items where the description would have only included "bike" or "cycling" - but the related item information is smarter, and from previous six-day race photo, I found this rather astonishing six-day race photo of "Bicyclist William Anderson reading a letter while biking during a six day bike race." Is it really possible to ride this way?? And we worry about talking on a phone while riding! But then I suppose he isn't out in traffic with cars . . .
Posted by michael neubert at 8:26 AM