Kickstarter is "the largest funding platform for creative projects in the world" (they say) and it turns out, some of these opportunities are for new products to make cycling safer or easier (and hopefully more popular). In a previous post I looked at a couple of modestly scaled money raising endeavors for safety lighting proposals. Thanks to tire that inflates itself as you ride. They only need $250,000 (yes, a quarter of a million dollars) to get this under production!

It's a clever idea - there is a small tube that runs around the entire tire right in the middle of where the tire contacts the ground and as the bike compresses this tube, air if forced through the valve into the tire until some previously set limit is reached, then it stops. If the pressure goes down, it pumps it back up.

Of course there are many clever ideas that are patented that don't enjoy commercial success for one reason or another. What about this idea?

The problem that the inventor is trying to solve is simple enough - bike riders should be able to jump on their bikes and ride off knowing that the tire will soon be inflated to the right pressure if some air has escaped since the last time the bike was used. It is not an anti-flat system that would say pump the tire up fast enough to keep ahead of a lead created by a nail (for example). It also solves the problem of having your tires always at a consistend pressure as you ride since I don't think anyone has ever argued that the small amount that this happens is actually a problem for anyone. Therefore your user is the person who is tired of pumping air in her or his bike tires once in a while before riding.

Are their many such people, really? One wonders. For one thing, while it is not a good thing, many people who ride even relatively frequently (for Americans) are rather lax about their tire pressure, based on conversations I have had. Those people who do care about it, it seems to me, are not likely to feel a desire to turn this activity over to an automatic system to do it for them.

Efforts to keep air in the tires or avoid having flats have been proposed (and patented) since the development of the safety bike in the 1880s, so attempts to simplify cycling by reducing interactions with tires are not new. For example, below is an 1896 patent for a "self sealing" bike tire. 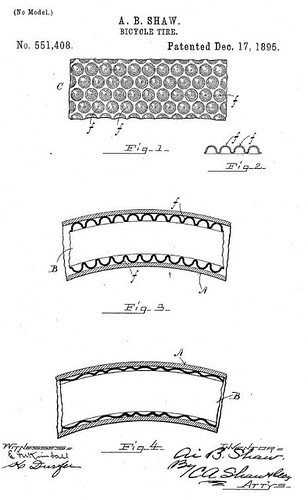 Why didn't the self sealing tire succeed? Well, because it was a layer of complexity and cost on top of what is the best thing about bicycles - that they are pretty simple devices. And also that they introduced a new failure "opportunity" rather than just getting rid of the old one. And of course you have to pay more for it.

This particular idea is quite elegant (in a way) but the Kickstarter proposal fails to suggest what the price point is that they have in mind for these fancy tires that inflate themselves. While in theory anyone would say, "sure I want a tire that keeps itself at the right air pressure" I suspect when they see the relative cost they will wonder if operating the pump occasionally is really that inconvenient (for that portion of the cycling public who care about their tire inflatiion situation other than when the tire is more or less flat). That, in the end, is the issue - are people (Americans - I assume a Dutchman for example would guffaw if he saw this product) so lazy that they will pay $$$ more for a high priced tire rather than fill it with air occasionally themselves? The product developers don't argue that it is a safety issue, unlike that yellow light in your Ford Explorer so you don't tip the thing over with underinflated tires.

And I'm pretty sure, notwithstanding their remarks in the FAQ, that this approach does introduce new problems to manage. They claim that a "little filter" will keep dust and dirt from interfering with the intake of air to inflate the tire, but given where it is (down practically on the ground) and the small sizes, presumably then the issue is the "little filter" getting a lot clogged. Also, as shown in its development phase, this pressure gauge limiter thing that rides on top of the inner tube valve looks like trouble with a capital "T". They admit in their FAQ that in production this thing would ideally be a lot smaller and perhaps not angled straight out from the rim but rather along the rim somehow, or supported by a spoke. Well - yeah. Because a weak point in every inner tube is at the valve, so putting that big monster thing on top of the valve is begging for trouble. They don't need just their own tire, I think, but their own wheel-tire combo.

Finally, the tube (they call it a "lumen" which apparently is a biology term for a tube-like structure) that is compressed as the wheel turns and does the pumping runs on the outer center of the tire where the greatest wear is on any bike tire. However thick the wall of that lumen (tube) is is how long your tire lasts. If you get a little cut through that lumen - well, so much for the self inflating feature and the tire is ruined (which they admit in their FAQ). So, for a given style of tire, this self inflating tire costs more but lasts a shorter period of time and has a risk factor for the failure of the feature that you paid extra for.

Industry statistics don't say how many bicycle tires are sold, but presumably the best result for the inventors would be to get a nice urban bike equipped with these tires as standard equipment. Perhaps they'll get lucky.

Anything that makes riding a bike easier can be considered, if you are in the cycling camp, to be good for society (more green, more exercise, etc.). This is something that replaces one small inoffensive task (that many are a bit inattentive to, but with few serious consequences) with unnecessary complexity and cost, and then claims to be easier. I guess it depends how you define "easier."