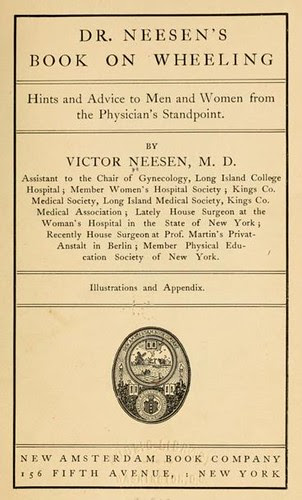 Dr. Neesen's Book on Wheeling is a rather extreme (and late, since the cycling craze was ending by this time) example of the "physician as guide to all-things-cycling" approach to cycling advice. Note his particular qualifications as a specialist in women's medicine:

He includes some interesting photographs of men and women cyclists in his book - here are those of tandems and riders. I have included the original captions, which in keeping with his rather directive sort of advice, usually find some fault with the models' posture. 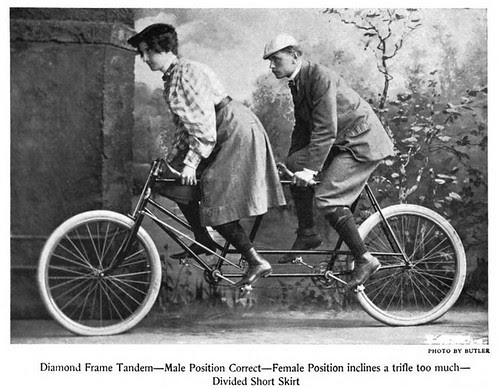 Above is the only photograph in the book of this particular tandem - although the front rider is a woman, the frame has a continuous top tube rather than a step-through portion for the woman rider, which could be either the front section or the rear. (This author takes the slightly radical position that women, properly attired, should be fine riding a "diamond frame wheel.") 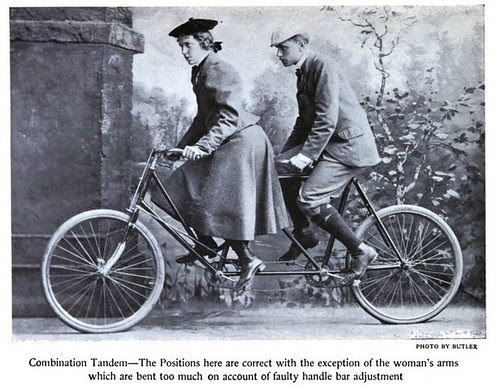 Above is the first of two photos of this tandem that has a step-through frame section in front. Note that this tandem (and the preceding) have the ability for the back cyclist to steer also - how this worked in practice, one can only wonder. It certainly negated some of the advantage in the normal tandem arrangement, where the "stoker" in the rear can focus all if his (or her) energy on pedaling. Presumably the assumption was that the man could easily see over the woman in front, but it doesn't look that way here. Many tandems at the time had the step-through portion in the rear, in which case the rear rider could not steer (at least not in examples I've seen). There was an apparent tension between the version that was more socially acceptable (woman in front) versus what was easier to engineer (man in front). 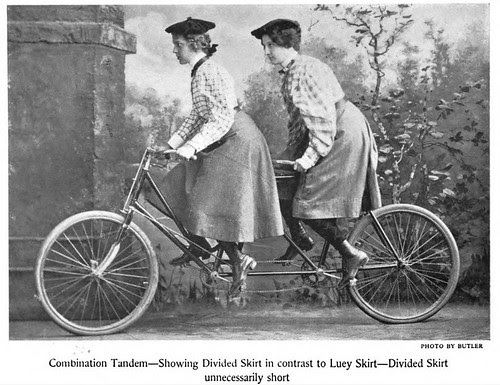 To ride a "diamond frame wheel" Dr. Neesen advises wearing a short divided skirt, but apparently this is too short.
Posted by michael neubert at 7:55 AM