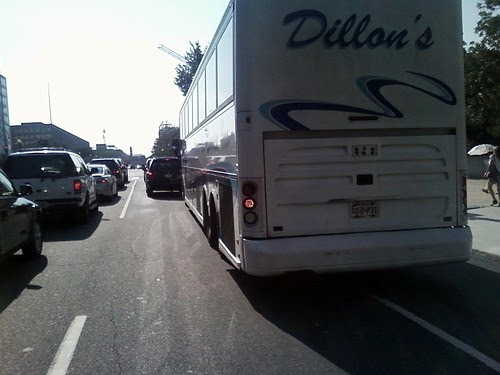 This is just lazy driving, in my view. But I only drove a city bus for 12 years so what do I know.

Anyway, as with a year ago when I saw some less than excellent driving from these people, I took a photo and then I wrote an email:

This was taken with a cell phone camera, so the quality is not terribly good. This is proceeding west in Independence Ave SW, just approaching the intersection at 7th SW. This would have been around 4:30-4:40? Today. I don't wear a watch.

This is a common practice with Dillons buses making this turn - splitting the two right lanes. Here you have a photograph illustrating what I see often enough. It's just sloppy and dangerous - and completely unnecessary! This bus is turning into three lanes, so if the bus was entirely in the right lane on Independence it would be no problem to swing around the corner even if the nearest southbound lane has a vehicle in it. The bus ain't that long.

The only reason for this approach is to make it simpler to intimidate pedestrians by having four-five feet to turn in the direction of the crosswalk to the right without actually going into the crosswalk. I grant you, waiting until the crosswalk clears if the bus stays patiently in the right lane, where it belongs, isn't much fun - but what this driver is doing is putting the problem in the lap of everyone in two lanes behind the bus. Do you want your buses sideswiped? This is asking for it.

I was on a bicycle, by the way, and had plenty of room to ride right by (on the left) and from my personal perspective this is great since he blocked traffic and I got on down the road. But otherwise it's awful. 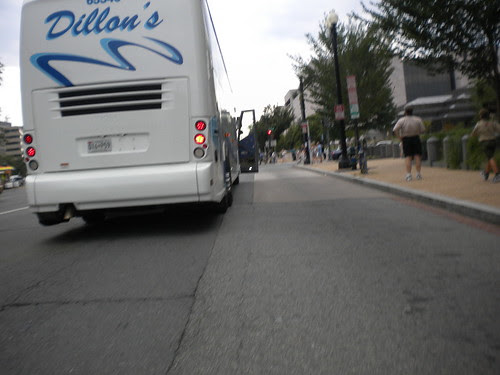 The last time I took a picture of a Dillons bus - the "open the door with a full lane open to the right so the passengers can get run over" technique
Posted by michael neubert at 8:30 PM