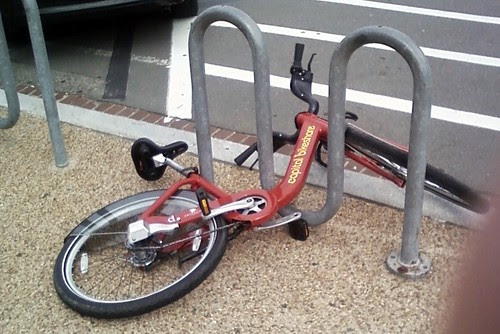 Unlocked, in front of the U.S. Botanic Garden, middle of the day

I went for a mid-day run and below the Capitol (in Washington DC) this CaBi bikeshare bike was sitting like this, unlocked, in front of the U.S. Botanic Garden. No one around seemed connected with it. CaBi bikes don't come with locks - the idea is you ride from one docking station to another, so why do you need a lock? On the other hand, if someone makes off with one charged to a particular account, there is a 1,000 dollar charge. 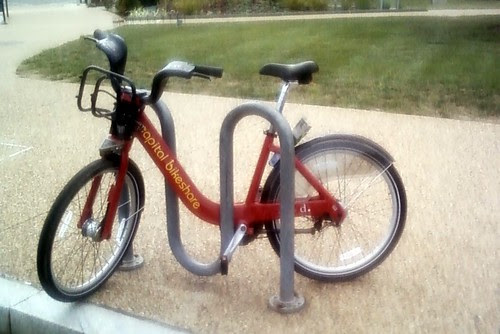 Still here twenty minutes or so later, but someone stood it up anyway

When I was heading back, it was still here. That someone had stood the thing up led me to think it really was here unattended. It now had some tourist brochures shoved in behind the seatpost. My guess would be that someone found it improperly docked (not locked in) and took it for a little joy ride. I called CaBi (their number is on the bike) and they were going to send someone to investigate - nobody around paid the slightest attention to my interest in this bike - if someone had really left it like this, out of their sight, the person was being a bit lax.

A problem for CaBi would be that this area is restricted for delivery sorts of trucks, like the one CaBi uses to ferry bikes around. Someone would have to walk a few blocks.

Later in the day when I went home it was gone.
Posted by michael neubert at 7:30 PM