Bob Roll in his days with the 7-Eleven team

Lately I have given up Swedish detective novels (of which there seems to be a never-ending supply) in favor of cycling books of various sorts, from "policy tomes" (think Pedaling Revolution: How Cyclists Are Changing American Cities) to cycling travel narratives (now I'm reading Take a Seat: One Man, One Tandem and Twenty Thousand Miles of Possibilities and also the occasional book about professional cycle racing.

Which brings me to Bob Roll, and his "two" books. Bob Roll has been a cycle racing commentator for OLN and more recently Versus for the Tour de France following his racing career, but his first sports journalism efforts were writing for Velonews.

I work in a very large library in Washington DC. We don't have everything, but we have quite a lot (of books, anyway). Given Roll's performances for "Road-ID" ads (you can watch the regular ads on the Road-ID channel on YouTube, although you get the best sense of Bob during the first third of this "outtakes" collection video. He even talks about his books, saying, "I am an author - although the books aren't that good." He was joking.

So it seems plausible that a book by Bob Roll could be pretty funny. And, according to the very large database at the library where I work, Bob has written two "memoir" type books of his racing career! (Leaving aside two books he has co-written that are "how to understand the Tour de France" guides.) Fantastic! 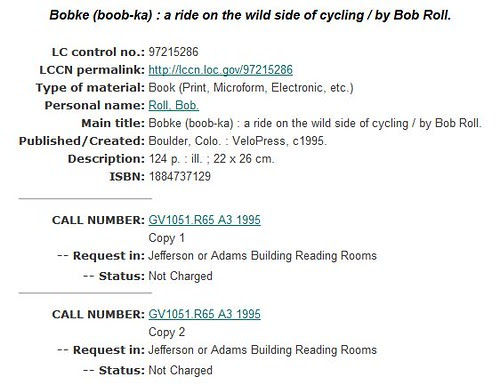 The "bibliographic record" that describes Bob Roll's first book, from the very large database of such things

So, above is the description of Bob's first book, published in 1995 - 124 pages of Bob. It's a fun book, in a large paperback format with quite a few photos of Bob being amusing, or sometimes just racing his bike (without being amusing). Most of the text is taken from stuff he wrote for Velonews and is in the form of cycling race diary entries (he was writing while still racing at that point). It's a little random in spots.

Lourdes is a bizarre place. It's a sort of Kmart for Catholics, and provided a weird takeoff point for this final mountain stage.

Nevertheless, if in the right frame of mind, Bobke I (as I think of it) is a good (and quick) read. 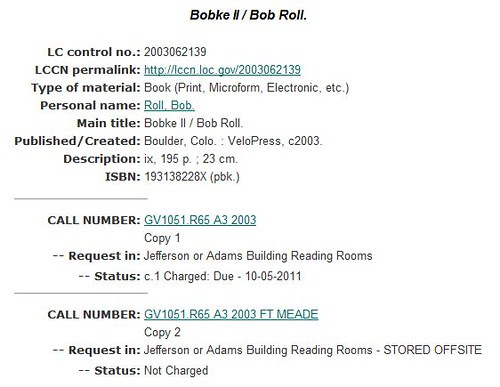 Why do I put "second" in quotes?? Because once I got my hands on the "second" book and started reading, I thought, "wait a second, I read this book already!" And I had, mostly. The first two thirds of Bobke II is the same as Bobke I, except that it is now in a smaller paperback format (with more pages, yeah) and no photographs (boo! on taking out the photographs). And in fact, on the verso (that's "back side" for non-librarians) of the title page it says, "Part I [of Bobke II] was previously published as Bobke (VeloPress, 1995)." So, what one gets that is new in Bobke II is "Part II (of Bobke II)" and that amounts to about 65 pages. To paraphrase Bob, "ouch!"

Still, there is some good stuff in those 65 pages. There is a description of Bob's training rides in North Carolina with Lance Armstrong and there is probably the most amusing article-length first person description of a professional road race that I have ever read anywhere, although I may be heavily influenced by the central role of the Russian "Team Lada" cycle team in it. (I have some college degrees in Russian studies. Oh - and somewhat oddly, the full text of this story is online.)

I assume the reason that the publisher decided they could get away with this is that the number of copies of Bobke I printed and sold was tiny - at that time, the only reason anyone would know who Bob Roll was would be from being a bike racing nut (remember, 1995 was before Lance Armstrong won any Tours) and (or maybe or) reading Velonews. This isn't a huge market. By the time of Bobke II, in 2003, Bob had already put in several years as a TV commentator and although the audience was still skewed to people who were interested in cycling, thanks to Lance this was much larger market - so for the three people who accidentally bought Bobke II who already had Bobke I; well, they should be more careful.

I feel some affinity for Bob Roll, although for no good reason I suppose. Bob has a gap-toothed smile and I have a gap-toothed smile. Parked in that gap-toothed smile Bob has a tooth that (from the color) I would guess has a dead nerve and guess what, so do I. Bob thinks he's pretty funny and I would like to think I'm funny (but I concede wacky crazy funny to Bob). And Bob is a former professional bicycle racer and I like to sit on a bicycle from time to time and pedal to and from work.

At any rate, I hope I have cleared up the "two Bob Roll memoirs" situation sufficiently.

If after all this, you are still interested in some further amusement, I offer a link to a 1987 video from the 7 Eleven Cycling Team that I came upon while doing "research" for this blog post. 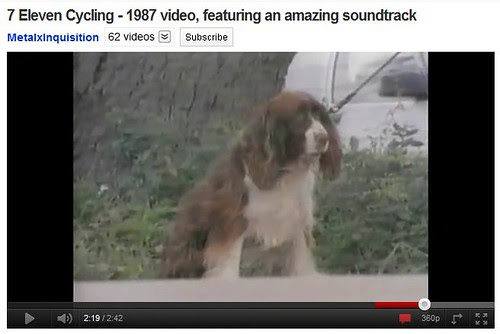 At 2:18 during this very dated video there are a couple of seconds of this Springer, attentively watching the bicycle race. This would be Springer with different interests than the one in our house.

Posted by michael neubert at 8:07 AM