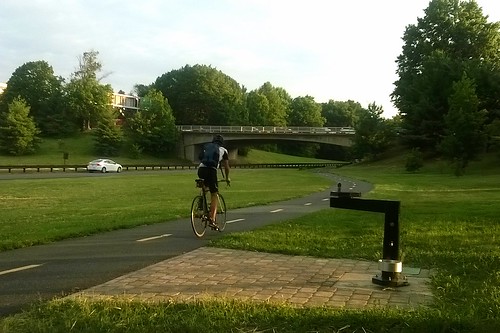 There has been some construction work ongoing since (it seems) the end of last summer to improve small parts of the Mount Vernon Trail where it was routed down right next to the parkway (roadway). These improvements took longer than one would have imagined - part of it took longer than six months - but are good improvements.

At the same time, this new water fountain was installed. For a long time it was surrounded by yellow construction tape, but it didn't matter much since it was cooler weather. Now that hot hot weather has really arrived, it is great for this to be there.

Thursday afternoon it was up around 95 degrees (Fahrenheit, or around 35 Celcius) during ~ten mile (16 km) commute home. I have my bottle of water filled before I leave work, but getting through the DC traffic out of the city was hot work it seemed so when I got to this water fountain, I was glad to be able to stop and get a little refreshed.

The photo was taken Friday morning on the way in, around 6:30 - Fridays are a day a lot of people telework so not too much traffic, bikes or cars.

The fountain post has a metal bowl at the bottom that can be filled with water for dogs. Nice touch.

Thanks National Park Service! Happy 100th birthday!
Posted by michael neubert at 10:11 AM